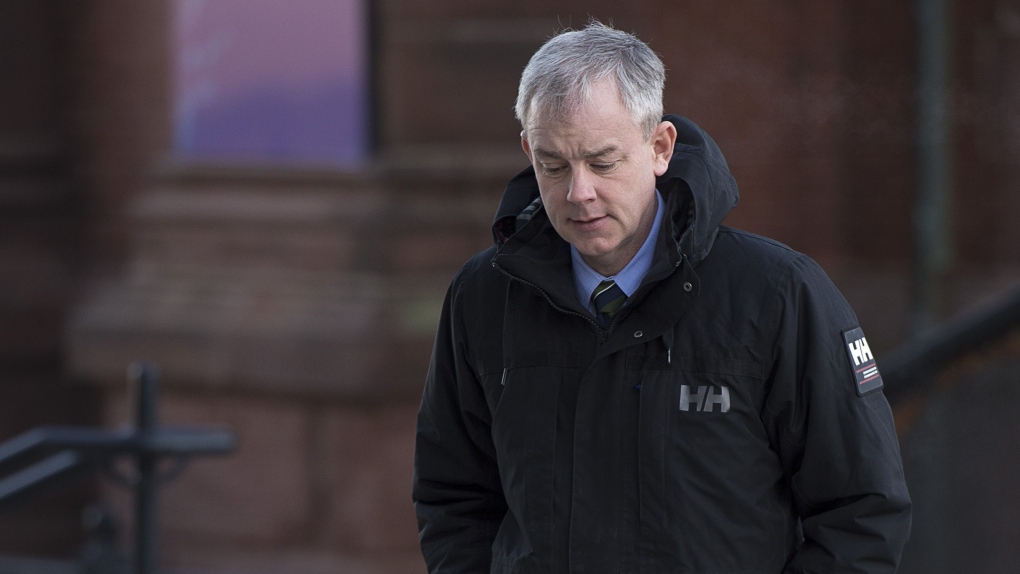 Dennis Oland heads to the Law Courts in Saint John, N.B., on January 29, 2019 as his trial in the bludgeoning death of his millionaire father, Richard Oland, continues. (THE CANADIAN PRESS/Andrew Vaughan)

SAINT JOHN, N.B. -- Lawyers representing accused killer Dennis Oland will begin presenting the case for the defence on Tuesday, arguing the circumstantial evidence against their client does not support a conviction.

Oland, 51, is the last known person to have seen his father, Richard, alive on July 6, 2011, but the defence case hinges on the possibility that someone else killed the wealthy businessman in a murder that was not properly investigated by the Saint John police department.

Defence lawyer Alan Gold said in his opening statement when the trial began last November that the Oland murder trial is distinguished by its "absence of evidence."

The defence is planning to call several witnesses, but the star witness will be Dennis Oland himself. He is expected to take the stand later this week, possibly Wednesday or Thursday.

"You will hear him tell you, 'I am innocent. I did not kill my father. I did not do this cruel, horrible attack on my father'," Gold said, adding that Oland has never wavered in asserting his innocence.

Ainsworth and his friend Anthony Shaw were working in the building where Richard Oland was killed on the night of the murder. They may have been "ear" witnesses to the killing since they heard loud thumps coming from Oland's second floor office that likely were the sounds of the multi-millionaire businessman being bludgeoned to death.

The videotaped statement from Ainsworth, taken by a private investigator for the Oland family not long after the murder in 2011, shows him saying he believes the noises occurred sometime between 7:30 p.m. and about 8:10 p.m. on the night of July 6, 2011. Shaw also believes that was about the time, although he describes it as a "guesstimate."

If that was indeed the time, Dennis Oland could not be the killer. He was caught on security video shopping at a store in his home community of Rothesay, on the outskirts of Saint John.

During Dennis Oland's first trial in 2015, Ainsworth said he could not be more precise about the time he heard the noises beyond saying it was sometime between 6 p.m. and 8 p.m. That window of time means Dennis Oland could be the killer since he did not leave his father's office until 6:30 p.m.

Oland was found guilty at his first trial but the jury conviction was set aside on appeal and the new trial ordered. The current trial is before judge alone.

Crown prosecutors took close to 40 days of testimony to lay out their case against Oland, who they say killed his father "in a rage" in a dispute over money.

Richard Oland, 69, was beaten to death with a weapon that was never found. Dennis Oland was charged with second degree murder in 2013.