Despite court ruling, no timeline for closing N.S. institutions for disabled people

Despite court ruling, no timeline for closing N.S. institutions for disabled people 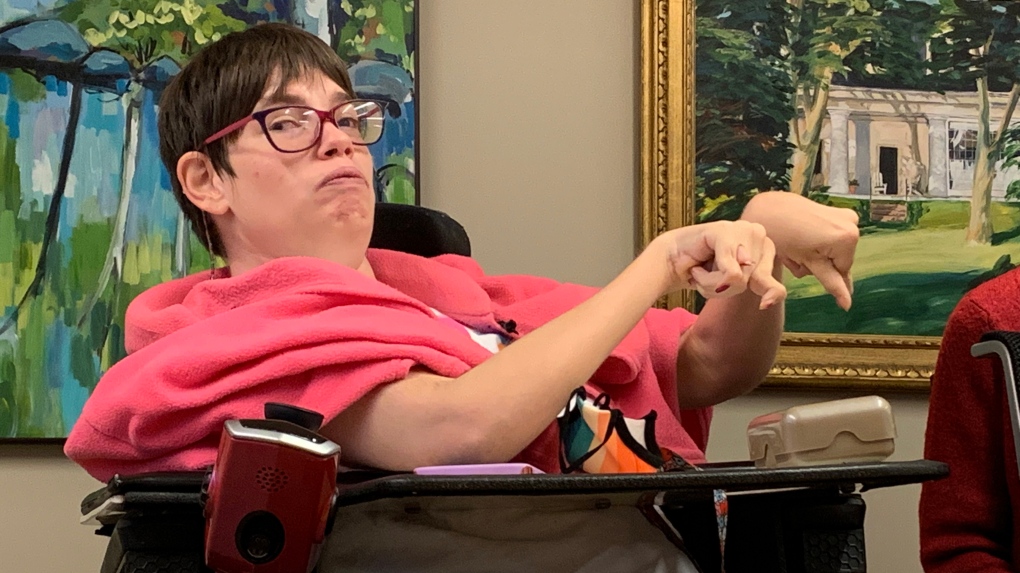 Vicky Levack, a spokeswoman for the Disability Rights Coalition, speaks at a news conference in Halifax on Wednesday, Dec. 1, 2021. (THE CANADIAN PRESS/Michael Tutton)
HALIFAX -

Nova Scotia does not have a precise timeline for phasing out large institutional housing for people with disabilities, the deputy minister of the Department of Community Services told a legislature hearing Tuesday.

The government is committed to closing the facilities -- as called for in a decade-old report -- but it needs to ensure residents are supported as they move out into smaller homes in the community, Tracey Taweel said.

"We need to move at a speed that allows us to ensure we have the human resource capacity to support individuals as they transition to communities," Taweel told the committee. "That we respect where and how they like to live and support them appropriately and that's going to take us some time."

Last October, the Nova Scotia Court of Appeal ruled that the province's failure to offer "meaningful" access to housing services for people with disabilities amounted to a violation of their basic rights.

The deputy minister said there are eight adult residential and regional rehabilitation centres that are still open, with one -- Harbourside Lodge in Yarmouth, N.S., which currently houses 22 people -- slated to close by the end of this year. Taweel said her department needs to guard against the risk of creating "mini institutions" in smaller homes if there isn't appropriate support.

"We don't want that," she said. "We need communities to be able to support and welcome in the richness that comes from individuals who have a range of abilities. That's going to take some time to build."

A 2013 report done for the government and known as "The Roadmap" called for phasing out institutional facilities and replacing them with small options homes by 2023.

"I cannot commit that they will be closed by 2023, that would be false," Taweel said.

"One thing COVID-19 taught me is when there's government will, we can do things very quickly," said Levack, who has cerebral palsy and is still waiting to move outside a Halifax-area nursing home. She said she has been institutionalized against her will for the past 10 years.

Levack expressed frustration over the lack of government timelines for the closure of large facilities, calling it "so concerning."

"If there's no timelines then they can't be held accountable," Levack said.

Sheila Wildeman, a Dalhousie University law professor and member of the Community Homes Action Group, told the committee Tuesday that hundreds of people continue to live in large institutional settings and more than 1,000 others live in settings with "pressing support needs."

"What is needed for government to meet its obligations now are transparent and enforceable goals and standards anchored in human rights and the voices of persons with disabilities," Wildeman said.

Taweel told reporters that Nova Scotia is the last jurisdiction in Canada to close large institutions.

According to the Department of Community Services, 498 people were housed in adult residential and regional rehabilitation centres as of March 31. Another 375 were housed in residential-care facilities, which provide permanent government-assisted housing for people who need personal care and assistance with day-to-day life.

There were also 199 people under the age of 55 housed in long-term care facilities as of April 1. The department said that number could include people with disabilities but could also include individuals with other medical conditions that require support, such as early onset dementia.

This report by The Canadian Press was first published Sept. 6, 2022.

BREAKING | Bank of Canada raises key interest rate to 4.25 per cent, its highest since 2008

The Bank of Canada has raised its overnight rate by 50 basis points to 4.25 per cent, marking its seventh rate hike in nine months. The last time the bank’s policy rate was this high was in January 2008.

The Winnipeg Police Service believes the remains of two victims of an alleged serial killer are in a landfill north of the city, but says the recovery of their bodies is likely impossible.

The Royal Canadian Mint is issuing a new $2 coin with a black ring in honour of the late Queen Elizabeth II.

Democratic Sen. Raphael Warnock defeated Republican challenger Herschel Walker in a Georgia runoff election Tuesday, ensuring Democrats an outright majority in the Senate for the rest of U.S. President Joe Biden's term and helping cap an underwhelming midterm cycle for the GOP in the last major vote of the year.

Apple Inc has been sued by two women who said its AirTag devices have made it easier for their former partners and other stalkers to track down victims.

Thousands of police officers carried out raids across much of Germany on Wednesday against suspected far-right extremists who allegedly sought to overthrow the government in an armed coup. Officials said 25 people were detained.

The discovery of a giant 100 million-year-old marine reptile's skeleton in Australia has been hailed by researchers as a breakthrough that may provide vital clues about prehistoric life.

Time Magazine on Wednesday named Ukrainian President Volodymyr Zelenskyy its person of the year, awarding him the accolade 'for proving that courage can be as contagious as fear.'

A seven-month-old baby is in 'desperate' need of a liver transplant in Toronto, but all she can do is wait for her name to reach the top of the donor list or hope for a living match.