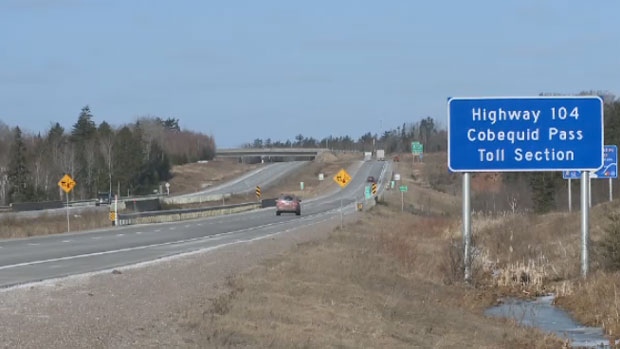 HALIFAX -- Nova Scotia is still considering whether to continue tolls for commercial trucks and non-residents using the Cobequid Pass -- or removing tolls altogether -- when the highway's debt is paid off.

The Liberal government has said it plans to remove the tolls for Nova Scotia motorists once the remaining $56 million is paid off on the bonds for the pass, a 45-kilometre stretch of highway that runs between Amherst and Truro.

But Transportation Department officials told the legislature's public accounts committee that it's not clear yet how that will be done once that debt is paid off in fiscal 2019-2020.

"At this point we haven't defined that," said Paul LaFleche, the department's deputy minister.

"The minister has authorized us to put together a series of options with facts for government, such that a decision can be made in the next year or so."

Among the considerations is whether to continue tolls for some users, or removing the tolls altogether.

The toll highway has collected $308 million in tolls since it first opened in 1997. Last year $19 million in toll revenues were collected, with about $12 million going toward expenses such as maintenance and capital costs.

Diane Saurette, a finance official with the department, said removal of the tolls would add to the province's maintenance burden for its roads and highways, now paid through the provincial portion of the gas tax and through such things as licensing fees.

"We actually run a deficit when we look at overall maintenance of our highway system on an annual basis. This year I think it is somewhere around $30 million ... in some years we were up to $75 million to $100 million where the actual funding that went into the system exceeded what we bring in, in gas tax," Saurette said.

Currently, 56 full and part-time local jobs depend on the toll operation -- a figure that would be reduced to just 10 departmental employees if all of the tolls are removed, the committee was told.

The officials later told reporters that removing the tolls for Nova Scotia car drivers only would still leave about 60 per cent of the revenue from all commercial truck and out-of-province traffic.

Saurette said that alone could take care of maintenance costs.

"If we just looked at purely out-of-province motorists, the revenue could be higher than the expenses required," she said. "So part of the scenarios is: Do we remove tolls completely? Do we keep tolls on? Do we break even? But we need to understand the revenues first before we do that."

Of that cost, the province and Ottawa paid $27.5 million each with the remainder paid through the issuing of bonds that were to be paid back over a 30-year period through toll collection.

The highway's tolls currently range from $2 to $24 depending on the type of vehicle and whether they are paid electronically or in cash at the booth.