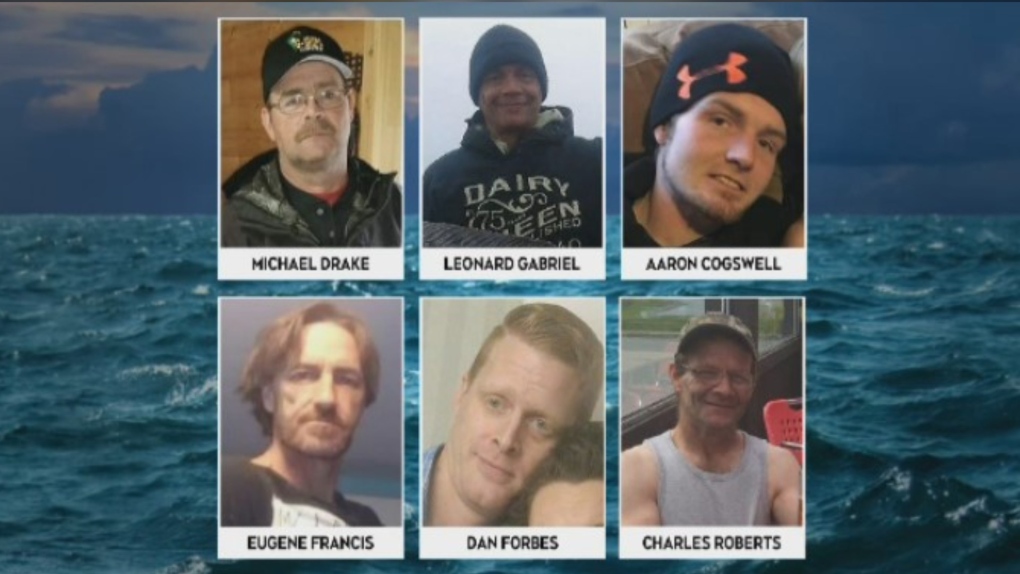 Pictured from top left to bottom right: Michael Drake, Leonard Gabriel, Aaron Cogswell, Eugene Francis, Dan Forbes, and Charles Roberts -- the crew of the Chief William Saulis, a scallop dragger that sank in the Bay of Fundy on Dec. 15, 2020.

HALIFAX -- A veteran of Nova Scotia's diving industry says the tides and depth of the Bay of Fundy would present challenges for the recovery of bodies, if the wreck of a scallop dragger that sank last month can be located.

Shawn MacPhail, the operations manager of Dominion Diving Ltd. of Dartmouth, N.S., said in an interview Monday that opposing currents and tides on the bay often make it "a very tricky place to conduct any diving."

The firm has conducted multiple diving operations near the mouth of the bay and has used its remotely operated undersea vehicles, or ROVs, at locations around the region.

Since the sudden Dec. 15 sinking of the Chief William Saulis, the body of one crew member, Michael Drake, has been found along the coast north of Digby, but crew members Aaron Cogswell, Leonard Gabriel, Dan Forbes and Geno Francis and captain Charles Roberts are still missing.

Cogswell's mother has said she hopes that police and federal agencies can locate and return the body of her son if he's still aboard the sunken boat.

A spokesman for the RCMP said that sonar work was being carried out on Monday to attempt to locate the vessel, which the Transportation Safety Board has estimated went down in waters about 61 metres deep, roughly 4.8 kilometres off the southwest coast of Nova Scotia.

Sgt. Andrew Joyce, a spokesman for the RCMP, said the team didn't locate the dragger on Monday.

The first step in a potential recovery effort would be an extremely detailed feasibility and safety analysis, MacPhail said.

He said if the vessel is found and carefully mapped, then based on his firm's past experience, there are limited time periods when the current in the tidal bay slows enough for work to be carried out. In addition, at times the current at the surface differs from the direction in the deeps.

MacPhail also said high volumes of sediment and particles in the bay lead to poor visibility, adding to the challenge.

"If you have visibility reduced to one metre on a shipwreck which could be upside down or sideways, there are entanglement hazards, nets and debris around the vessel, so you really have to know what you're putting the diver into," he said.

If the boat is still in deep waters, specialized diving equipment is needed, as Nova Scotia regulations only allow diving with air tanks to a depth of 50 metres, said MacPhail.

The operation of ROVs to provide better imagery of the vessel and perhaps dive on the sunken boat could be assessed, if water velocities around the wreck allow, he said.

"That would be the first line of thinking, to take the person right out of it (the recovery operation) and reduce the risk," he said.

Dave Shea, the senior vice president of engineering at Kraken Robotics, based in St. John's, N.L., said in a recent interview that ROVs have technology that permit the manipulation of objects. However, he noted that if the ROV can't enter the hull itself and has to cut open the boat, this requires specialized tooling.

This report by The Canadian Press was first published Jan. 4, 2021.

This is a corrected story. A previous version said Shawn MacPhail was interviewed Tuesday.