HALIFAX -- As dual rallies were held in Nova Scotia by sides for and against the Northern Pulp mill’s plan to pump treated effluent into the Northumberland Strait, the company said it was preparing to shut down the mill if the province doesn’t extend the deadline to clean up Boat Harbour.

Dozens of tractor-trailers were parked alongside Highway 118 Thursday morning to show their support for Northern Pulp and the forestry sector, while another convoy of trucks drove through downtown Halifax in a show of solidarity.

The convoys caused traffic gridlock on the highway and also downtown as the large trucks made their way into the city for a union-sponsored rally by those involved in the province’s forestry sector.

Hundreds of people gathered outside the legislature to show their support for the forestry workers, many of whom will lose their jobs if the mill in Pictou County is shut down.

“There’s considerable pressure on everybody, right. It’s not just us as workers in the mill,” said Don MacKenzie with Unifor, the union representing the mill workers. “The pressure’s on the community, vendors, suppliers, woods contractors, saw millers. There’s pressure on the whole province.” 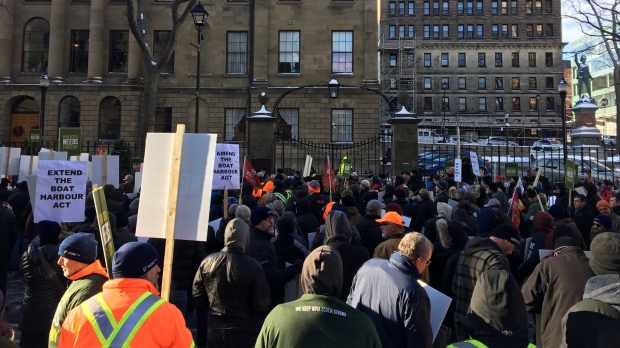 Sawmills in Nova Scotia were closed for the day so employees could take part in the rally.

“If the premier does not extend Boat Harbour and Northern Pulp leaves the province, most of the sawmill industry in the province will also shut down before too long,” said Robin Wilber of the Elmsdale Lumber Company.

Many at the rally noted the forestry industry is a significant economic driver for rural Nova Scotia, and want to see Northern Pulp remain in business.

“I’m very scared for my future, I mean, my family’s financial well-being, everything,” said mill worker Mark Langille. “My children’s future depends on me having this job. I’ve worked in Nova Scotia almost all my life and I want to continue to work in Nova Scotia, but if I lose my job at the mill, I’ll probably have to go out west and I really don’t want to do that.” 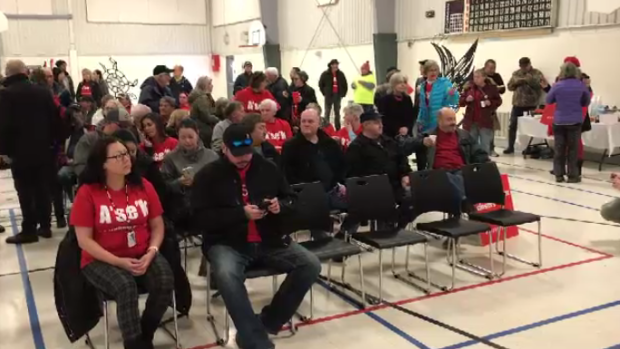 While supporters of the forestry sector were gathered in Halifax, roughly 200 people were gathered in a gymnasium on the Pictou Landing First Nation to show their support for the community.

“I’m very happy with the amount of people that came and the support that they’re bringing,” said Pictou Landing Chief Andrea Paul. “I think at the end of the day I just want people to be in a good place because emotions are very high and I felt like we needed to come together today in a good way.”

Under provincial legislation, the pulp mill must cease dumping its effluent into lagoons located near the Pictou Landing First Nation by Jan. 31.

People attending Thursday’s rally in the community urged Nova Scotia Premier Stephen McNeil to keep his promise and not extend the deadline.

“You have been a moral man with integrity on this, up until possibly tomorrow,” said Raymond Plourde of the Ecology Action Centre. “Don’t cave. Remain on the moral high ground. Do the right thing, please.”

“I think in order for our healing to start, I think that the effluent needs to stop flowing into our community,” said local resident Tracey Denny.

Before the rallies began, the CEO of Paper Excellence Canada -- the parent company of Northern Pulp -- issued a statement saying the mill will have to shut down if the province doesn’t extend the deadline to clean up Boat Harbour.

“Northern Pulp Nova Scotia will be forced to notify its workforce and suppliers that if the Government of Nova Scotia does not extend the Boat Harbour Act deadline for use of the Boat Harbour effluent treatment facility, the company will take the necessary steps to shut down the facility,” said Brian Baarda in a news release issued Thursday morning.

Baarda said the closure of the mill would be the “worst-case scenario,” forcing the termination of more than 300 employees, along with the cancellation of contracts with suppliers, contractors, and woodlot operators throughout the province, which he says will have an impact on more than 11,000 jobs in Nova Scotia alone.

“We continue to believe that Pictou County deserves to have both a clean environment and a prosperous economy, and that Boat Harbour needs to be closed and remediated,” said Baarda. “An extension to the Boat Harbour Act deadline while a new world-class wastewater treatment facility at Northern Pulp is constructed is vital to achieving this. Once complete, the new treatment facility would allow operations in Boat Harbour to cease, enabling federal and provincial remediation of the former estuarine lagoon.”

The company has consistently said that it will close the mill if the deadline isn't extended.

Wilson said the province doesn't have enough information to determine if the project will harm the environment, and the company can't move forward until it files a full environmental assessment report.

Nova Scotia Premier Stephen McNeil was expected to address the situation on Wednesday, but his office issued a short statement saying he would do so on Friday.

McNeil said he needed time to reflect on whether to give the company more time to complete an environmental assessment, or let the legislated deadline of Jan. 31 stand.

"I need to weigh all sides of this," McNeil said of a decision he described as the most difficult he's had to make in his six years as premier.

"There isn't one side or another. There's many facets associated with this whole issue, and I'm going to take the time to really reflect on it all. This is people's lives."

Paul has said there is nothing the government can offer the band to win its approval for an extension, and that a contingency plan is in place if the government extends the deadline. She confirmed that plan includes possible legal action.