ANTIGONISH, N.S. -- Nine months after a man driving a replica RCMP cruiser killed 22 people in Nova Scotia, the Mounties have arrested another man for allegedly impersonating an officer while driving a fake police car.

The Mounties said Wednesday the 23-year-old suspect from Antigonish, N.S., may have used the vehicle, which looks like an unmarked police car, to pull over other vehicles in the Halifax region and Antigonish County.

RCMP spokesman Cpl. Mark Skinner said investigators would like to speak to anyone recently pulled over by a similar vehicle.

Skinner said the suspect was arrested without incident Monday at a residence in Antigonish, where the vehicle was seized. The suspect was released from custody and is scheduled to appear in court at a later date.

The vehicle in question, a white 2013 Ford Taurus, was outfitted with LED lights in the rear window, a microphone on the dashboard, a public address system, citizens band radio and a push bar with LED lights mounted on the grill.

Though the lights were positioned in such a way to mimic a police vehicle, the lens on each light were orange in colour, rather than the red-and-blue combination that law enforcement agencies use.

As well, Skinner confirmed the suspect did not appear to have any police clothing or firearms of any kind. "There's nothing to suggest this fellow was ever wearing a uniform," he said in an interview.

Though the suspect's vehicle does not have any decals with police emblems, the model is similar to the vehicle Gabriel Wortman used during his 13-hour rampage in northern and central Nova Scotia on April 18-19, 2020.

The killer's late-model Taurus, however, was heavily modified with an emergency light bar on the roof and decals that looked exactly like those found on marked RCMP cruisers. 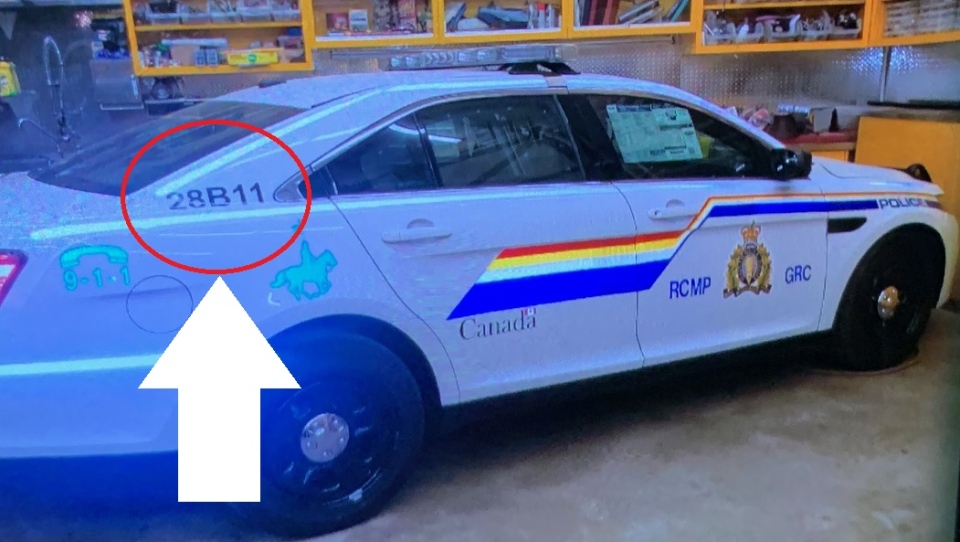 The fake police car driven by Gabriel Wortman (pictured above) was heavily modified with an emergency light bar on the roof and decals that looked exactly like those found on marked RCMP cruisers. (COURTESY NOVA SCOTIA RCMP)

Early in the RCMP's investigation of the mass killing, a senior officer said the killer's vehicle allowed him to "circulate around the province, steps ahead of our investigators."

As well, Wortman's replica vehicle was so convincing that questions were raised about the availability of former police vehicles for public purchase. The killer's car and the one seized this week were described as decommissioned police vehicles.

Skinner said police are aware Nova Scotia residents may be rattled by the seizure of yet another fake police car. That's why investigators decided to release more information about the case than they normally would, he said.

"The incident is concerning to the RCMP," Skinner said. "We've taken the unusual step and released a good deal of information about the investigation."

Soon after the RCMP released details about the latest incident, the leader of the province's Opposition Progressive Conservatives issued a statement repeating his call for a ban on the sale of such vehicles.

"This is incredibly dangerous," Tim Houston said. "It's no longer enough to say that lives are at stake. It's too late for statements like that."

Houston said the Tory caucus plans to introduce legislation to fix what he called a significant loophole. "This cannot wait a second longer. I'm calling on the government to take steps to ban the sale of these vehicles outfitted with police accessories."

The next morning, he resumed killing people he knew and others at random before he was fatally shot by a Mountie at a gas station in Enfield, N.S., which is just north of Halifax.