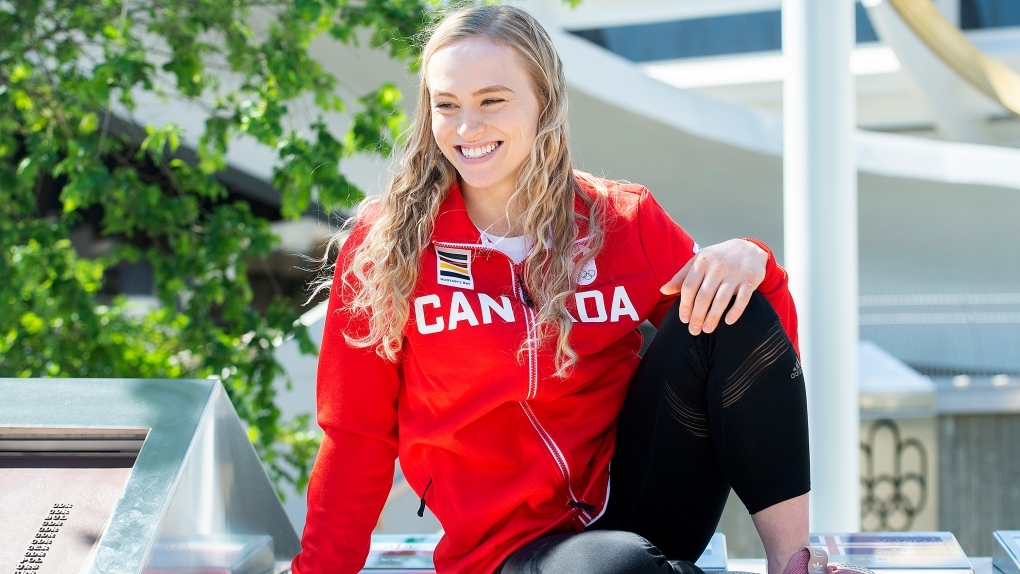 Ellie Black was made for this era of women's gymnastics.

The sport rewards power, strength and audacity more now than it did a decade and a half ago, when judges scored with an eye more toward balletic grace than degree of difficulty.

"It's aggressive. It's athletic," former Canadian gymnast Kyle Shewfelt said. "When she's on the beam, Ellie isn't the type of athlete who is trying to be light on the beam. She's trying to break the beam.

"Her style is so aggressive and it's so strong. That's the best way I can put it. She's a strong woman and that comes across in her gymnastics. She's going after it. She attacks."

The man who broke Canada's artistic gymnastics barrier at the Olympics Games with a floor routine gold in 2004 is bullish on Black's podium potential in Tokyo.

Shewfelt believes the 25-year-old Black from Halifax has the goods to be the first Canadian woman to win an artistic gymnastics medal in her third Olympic Games.

"Every conversation that's had in the gymnastics community, who is going to challenge for the podium? Ellie's in that conversation," Shewfelt said.

Black placed fifth in 2016 for the best Olympic all-around result by a Canadian. She was the country's first all-around world championship medallist a year later when she took silver in Montreal.

"You have to hit four routines on four different events cleanly, consistently, and mostly hit the best routines you've ever done, to be able to end up on that podium that day," Black explained.

She fell just short of the all-around podium at the 2019 world championship in Stuttgart, Germany, in fourth.

After helping Canada qualify a women's team for Tokyo, Black tore ligaments in her ankle landing a vault -- her last event of the all-around -- and subsequently needed surgery.

If the Tokyo Olympics, postponed to 2021 because of the COVID-19 pandemic, had gone ahead in 2020, Black would have been able to compete, albeit on an accelerated rehabilitation schedule.

She placed fifth in her first post-injury competition, the American Cup in Milwaukee in March 2020, just as the coronavirus began shutting down sport globally.

Not only Black's ankle, but her body got a breather from the constant pounding of her sport when the pandemic put competition and training on hiatus.

"I think we're learning as athletes it's OK to have a bit of time off here and there to let your body recover and let your brain recover," Black said.

She was isolated, however. Black trained mostly by herself at Halifax Alta Gymnastics Club when she could get into the building as Nova Scotia moved in and out of lockdowns.

"There was a lot of training alone for her, almost alone, which was different for her," her coach David Kikuchi said.

International and domestic competition disappeared, as did travelling to training camps to join her Canadian teammates.

"I haven't spent that amount of time in Halifax since I was very little," Black said. "I'm usually away very, very often. I was home for about a year, which is pretty crazy, and a different thing to adapt to."

A 13-year-old Black watched Kikuchi compete in the 2008 Olympics in Beijing and thought "I want to do that."

"He trained at my club and was representing Canada," Black said. "That kind of sparked that Olympic dream that four years later I could reach the 2012 Olympics."

"She was strong, powerful, with unique skills, funky," Black said. "Not always completely polished in a sense and I could relate to a lot of that.

"I was very strong and powerful and still am, but when I was younger, I was definitely less polished. The artistry side was a little more difficult for me."

Shewfelt describes Black as a gymnast in command of her career.

"She has longevity in the sport," he said. "I think that's because she's in a very positive environment and she's in charge.

"Ellie Black, she's showing up and she's driving the bus. She's got her hands firmly on that steering wheel."

"It's a strong team that we have," said Kikuchi, who is also the women's team coach in Tokyo. "Ellie, Brooklyn and Shallon are all very veteran members and have been to at least three world championships. Ellie and Shallon have been to the Olympics before.

"They're all very experienced, are great athletes and have been in world championship and Olympic finals in their careers. There's not many Canadians who have done that in their history."

Rene Cournoyer of Repentigny, Que., is Canada's lone athlete in men's gymnastics, which gets underway Saturday.

The women's all-around competition is July 29, followed by apparatus finals. Black used the extra training time the pandemic produced to beef up her beam routine.

"We really made a different choice around her beam routine and are going for something way more difficult than it would have been," Kikuchi said.

Bolstered by her experience, training and healthy body, Black feels ready to perform in Tokyo.

"I'm feeling confident in the sense of I've made the best of the situation we have," she said.

"I'm also confident in the fact that our team is looking really good and we're really excited to go to Tokyo and show what we can do, even though our preparation has looked different."

This report by The Canadian Press was first published July 14, 2021.

Melbourne, which has spent more time under COVID-19 lockdowns than any other city in the world, is set to lift its stay-at-home orders this week.

New York real estate heir Robert Durst, who days ago was sentenced in a two-decade-old murder case, has been hospitalized after contracting COVID-19, his lawyer said Saturday.

The New Brunswick RCMP says it remains committed to 'strengthening relationships' between Mounties and Indigenous communities, as the province finds itself in the midst of litigation involving several Indigenous groups.

A 72-year-old man RCMP said was last seen on Oct. 8 was found dead, and his wife now faces a second-degree murder charge.

Leaders pay tribute at church where British MP was killed

Leaders from across the political spectrum came together Saturday to pay tribute to a long-serving British MP who was stabbed to death in what police have described as a terrorist incident.