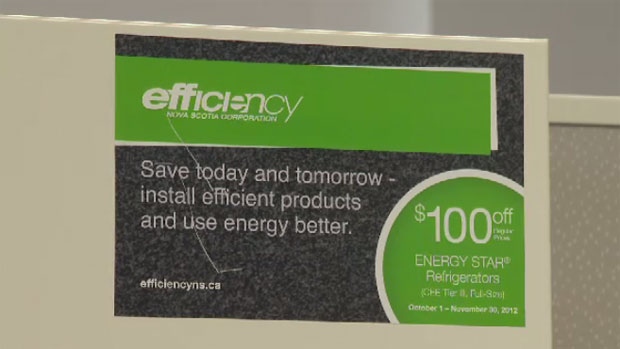 HALIFAX -- Nova Scotia's Energy Department hailed the merits of Efficiency Nova Scotia to the energy minister shortly after he took on the portfolio, but he says that doesn't change his plans to restructure the organization.

Briefing notes prepared for Andrew Younger in October leave little doubt about his department's assessment of the non-profit organization, which was established by the previous NDP government.

"Efficiency Nova Scotia Corporation has proven to be an extremely effective organization since it began operations in late 2010, having engaged over 100,000 participants in the province," say the briefing notes, obtained by The Canadian Press through access-to-information laws.

The notes say Efficiency Nova Scotia's programs save ratepayers money, resulted in power savings equivalent to the amount of energy consumed by 22,000 homes and provided free energy upgrades to nearly 14,000 people on low incomes in 2012.

Efficiency Nova Scotia's energy savings were also 28 per cent above the target set by the province's Utility and Review Board, the notes say.

They also say pursuing efficiency initiatives is the cheapest way of balancing electricity supply and demand, adding that the savings are greater than the cost of its programs and billions of dollars in additional infrastructure combined.

"Those costs would have to be paid by electricity customers and would be far more than an energy efficiency fee."

The Liberals came to power in part by railing against power rates that are among the highest in the country. One of their targets was the monthly fee of about $4 that is added to power bills to help fund programs offered by Efficiency Nova Scotia.

The party branded the fee, which totals $46 million annually, as a tax, vowed to remove it from bills and force Nova Scotia Power to pay for efficiency programs.

But nearly three months into its mandate, the government has not touched the fee, with Younger saying that won't happen until Jan. 1, 2015 because this year's fee was already set.

In an interview, Younger said the government "knows where it's going" on the funding model that supports Efficiency Nova Scotia, but he said it wouldn't be revealed until legislation is announced this spring.

He said while he remains committed to the work done by the organization, its structure needs to be changed in order to find even more savings for customers.

"Just because there are benefits in something doesn't mean there can't be improvements," said Younger.

He said programs are being assessed to determine which ones are outdated and which bring the "biggest bang for the buck."

"There's no plan to have them doing something other than efficiency programs," he said.

Despite Younger's assurances, there is some skepticism from supporters of Efficiency Nova Scotia and government opponents who believe the Liberals have been caught out by their previous rhetoric.

Catherine Abreu of the Ecology Action Centre said while she believes the government is committed to energy efficiency, it has a challenge on its hands because of an election campaign stance that left the public with a "less than favourable" impression of Efficiency Nova Scotia.

Abreu said the Liberals were elected partly because they promised to increase competition for Nova Scotia Power, and their position on Efficiency Nova Scotia puts them at odds with that.

"Efficiency Nova Scotia is at this point the greatest competitor Nova Scotia Power has in this province," she said.

She said she has a hard time understanding how the organization can be maintained if the $46 million in fees is ultimately shifted to Nova Scotia Power, a move she said would make "no sense at all."

"We can't hamstring (Nova Scotia Power's) ability to operate as a business, and taking away half of their profits to pay for their largest competitor would do just that."

NDP energy critic Frank Corbett said Younger's assertion in December that the government didn't want to create an unintended consequence in moving the $4 fee to Nova Scotia Power was telling, as is the department's assessment of Efficiency Nova Scotia in their briefing notes.

"They've realized that they've been caught out on it and that things like Efficiency Nova Scotia work," said Corbett.