Experts puzzled by McNeil's stance that N.S. would 'support' feds in shooting probe 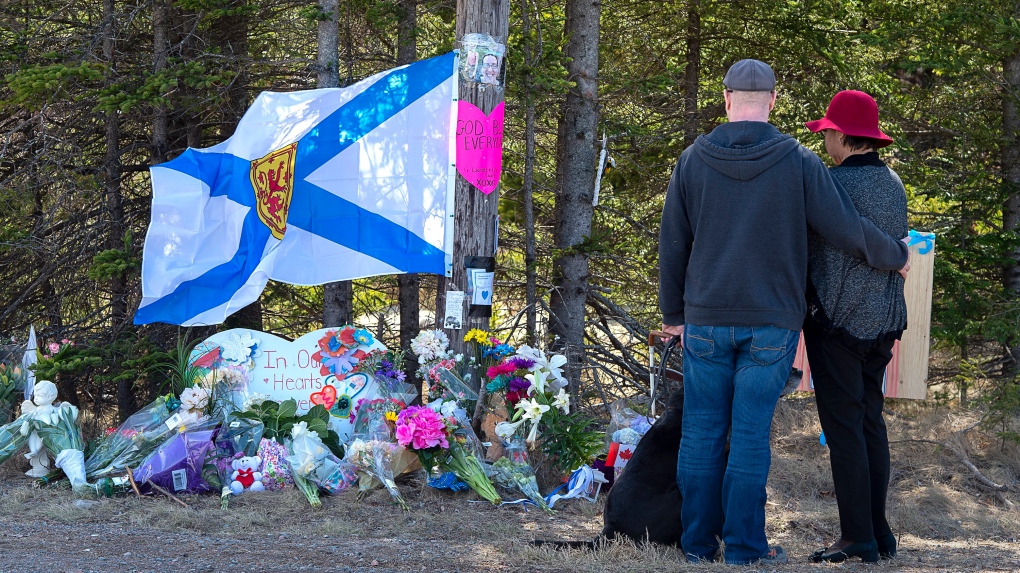 A couple pays their respects at a roadblock in Portapique, N.S. on Wednesday, April 22, 2020. RCMP say at least 22 people are dead after a man, who at one point wore a police uniform and drove a mock-up cruiser, went on a murder rampage in Portapique and several other Nova Scotia communities. THE CANADIAN PRESS/Andrew Vaughan

HALIFAX -- A stance by Nova Scotia's premier that his province would only play a support role if a public inquiry is called into a shooting rampage that took 22 lives is puzzling to some legal experts.

Premier Stephen McNeil said Thursday he's confident there will be a review of the killings, but it's his belief the national government should be in charge as the police force that responded is governed by national protocols.

Federal Public Safety Minister Bill Blair hasn't yet committed the Liberal government to calling an independent commission of inquiry into the killings of April 18 and 19.

His office sent an email saying the federal government "will do everything possible to ensure that we learn the lessons of this investigation, and make sure tragedies like this one never happen again."

The email also noted there have been many discussions between Blair and Nova Scotia's provincial attorney general.

However, McNeil told reporters that ultimately Ottawa will take the lead, repeatedly saying the provincial role is to assist and support such an inquiry.

Some legal experts in the province argue a wide-ranging inquiry should be initiated by the province under its Public Inquiries Act.

Archie Kaiser, a professor at Dalhousie University's Schulich school of law, notes the province, through its powers over the "administration of justice," has authority over criminal justice and policing.

The expert on criminal procedural law notes the province has chosen to enter a contract with the RCMP, enabling the Mounties to provide police services to enforce both provincial statutes and federal criminal law.

"Contracted RCMP services are subject to the control of the provincial attorney general on enforcement and policy issues. The main authority for provincial policing is the Nova Scotia Police Act," Kaiser said in an email.

RCMP discipline, administration and internal management are subject to the federal RCMP Act, he added.

"What this means is that most of the issues that would be part of the term of reference of a public inquiry are under provincial jurisdiction and the province could use the provincial Public Inquiries Act or the Fatality Investigations Act to establish the inquiry," Kaiser wrote.

He added that while it's possible some issues could be part of a federally mandated inquiry, "this is not a situation for competition."

"I am sure the levels of government can co-operate to conduct a single or dual inquiries in a co-operative way, sharing responsibility."

David Fraser, an access to information and privacy lawyer in Halifax, said a provincially led inquiry could shed light on key issues about domestic assault and intimate partner violence.

"Did the police have the right resources to respond to an incident like this? Could something like this have been anticipated? I am very broadly in favour of transparency and accountability," Fraser wrote.

One of the key topics in any inquiry would likely be domestic violence, including how police respond to it and what level of support exists for victims of violence in rural areas.

Police have said the rampage began in the small community of Portapique after the gunman restrained and beat his common law spouse before she managed to escape into the woods.

The gunman went on to kill 22 people and burn a number of homes before police shot and killed him outside a gas station in Enfield.

A former neighbour has said she reported the killer's domestic violence and cache of firearms to the RCMP years ago and ended up leaving the community herself due to fears of his violence.

RCMP have not responded to requests for information on how they followed up on that report.

Lenore Zann, the Liberal MP for Cumberland-Colchester, said she will urge both Blair and his provincial counterpart to hold an independent public inquiry.

Zann said in an interview her riding, which includes Portapique, has been left in a state of shock by the mass shooting.

"I'm sure we all feel the same that this is a horrendous incident and we want to get to the bottom of it," she said.

Zann also said a key purpose of a public inquiry would be to raise awareness of male violence toward women, and that awareness itself could help bring about change.

She also criticized McNeil's stance that an inquiry should be primarily Ottawa's responsibility.

"Why is he saying it's up to (Blair)? That doesn't jive either."

This report from The Canadian Press was first published May 14, 2020.