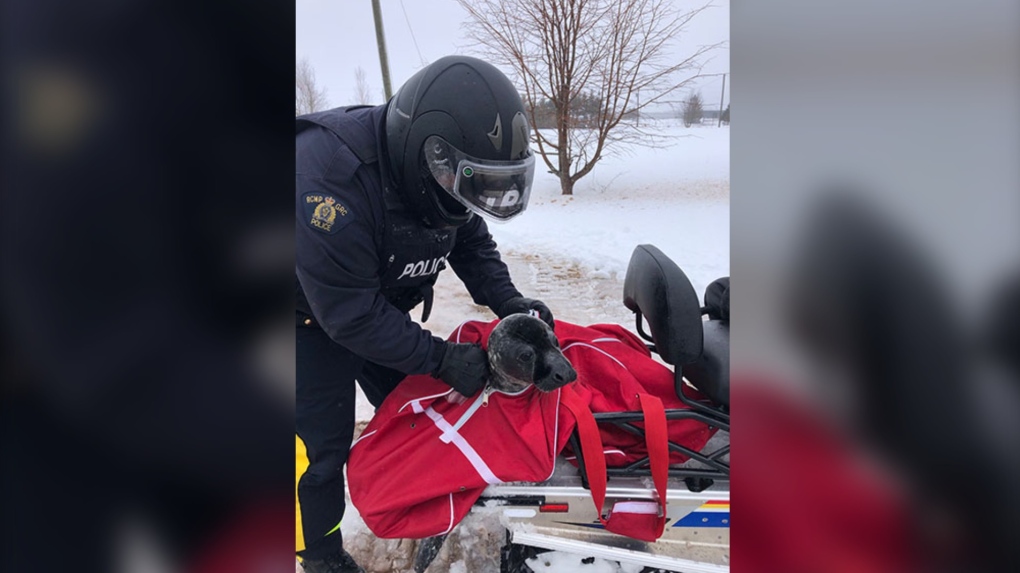 RCMP say they got a call from a farmer on Tuesday who said there was a seal shuffling through his field. (Photo courtesy: RCMP P.E.I.)

FAIRVIEW, P.E.I. -- For the second time in a week, police in Prince Edward Island were called to the scene of a wandering seal, and animal specialists say it may not be the last.

RCMP Sgt. Craig Eveleigh said officers picked up a seal Tuesday who'd managed to cross a highway and waddle deep into a farmer's field near Fairview, about 20 kilometres south of Charlottetown.

"We followed the trail for about three kilometres," Eveleigh said Thursday. "It just slithered all around like a snake, up through the field."

Officers used a snowmobile to track the animal as a drone kept watch from overhead, Eveleigh said. When they found the seal, it was zipped into a hockey bag and an official from the federal Fisheries Department took it back out to the water.

On Sunday, Charlottetown Police had returned a seal to the water after it was found roaming through a residential neighbourhood. Eveleigh said both animals were young grey seals, no more than six weeks old.

"It's a little weird," he said when asked about the frequency of seal rescues. He said there may be more seals wandering the Island because there's little ice this year on the Northumberland Strait, which separates Prince Edward Island from the mainland in the southern Gulf of St. Lawrence.

Danielle Pinder of the Marine Animal Response Society agreed that a lack of ice explains the behaviour. Seals spend a lot of time on the ice, she said: it's where they rest, moult and have their pups. Without any ice this year, they're doing it on land, "which means we're encountering them more on our beaches around the Maritimes," she said.

Pinder said her organization is fielding far more calls about stray seals than it usually does at this time of year, and the calls are coming from all over the region. She said though they may be cute, people should keep their distance and alert her organization if there's concern for a seal's well-being.

In an interview Tuesday, Fisheries Department marine mammal scientist Mike Hammill said this year "is probably amongst the poorest years on record" for sea ice in the Gulf of St. Lawrence. He said it's been an increasingly frequent issue over the last decade and that it's likely related to climate change.

"It seems to be part of a longer-term trend," he said.

This report by The Canadian Press was first published Feb. 25, 2021.