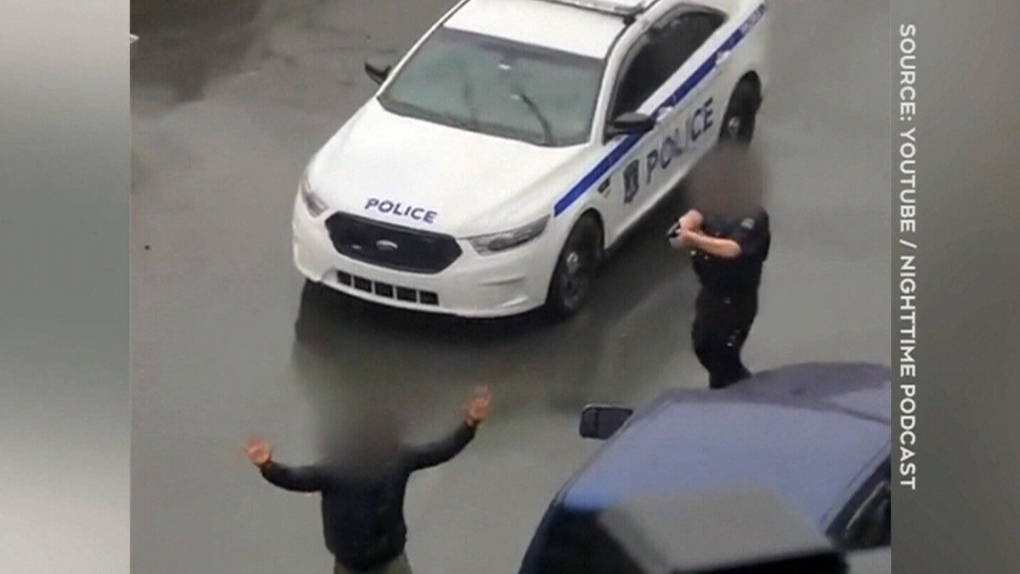 Over the weekend, a video was posted to social media that appears to show the initial officer who responded to the incident pointing his service weapon at a man that advocates say is Black, while threatening to shoot. (Photo courtesy: Nighttime Podcast)

HALIFAX -- An extended video of an altercation between a Halifax police officer and a Black man has been posted online, and while it shows a lot more of what happened, the incident itself remains very divisive.

Running almost eight minutes, the expanded version of the video shows an altercation between two men at a vehicle in the parking lot.

It will be another two-and-a-half-minutes before the officer arrives.

Already on his radio, his gun comes out seconds later and the order is unmistakable.

"Get down!!" the officer tells the man.

That doesn't happen and a minute later there is the exchange everyone's talking about.

"I know you will," the suspect replies.

"Stop f-----g walking," the officer says, as he follows the suspect walking around a pick-up truck the parking lot of a Halifax apartment.

Just a few seconds later, the man runs between two parked vehicles and then is gone, with no shots fired.

"Drawing your weapon in that situation to me, is not my first and best response," said Brian Johnston, who is the pastor at Zion United Baptist Church in Truro and served 30 years as a Halifax police officer before retiring in 2010.

Having watched the video, he's concluded it was not HRP's finest moment.

"This looks bad for any African Nova Scotian male," Johnston said. "I mean, if police are automatically going to arrive at a situation where we are present and draw weapons, that's bad."

The police association is standing by the member, noting officers seized two pounds of crack cocaine and a loaded handgun from one of the vehicles at the scene.

The group is also disappointed with the chief, who acknowledged the officer used what appeared to be, in his words, "inappropriate and unacceptable comments" during the arrest.

"I understand the chief is somewhat limited because it's before the courts, but there is a lot of information here that would not jeopardize this case that could in fact come out to the public," Steinberg said.

Police have launched an internal investigation in the matter, although a number of groups are calling for the Serious Incident Response Team to take over.

Felix Cacchione, the man in charge of that organization, tells CTV News it's not going to happen because swearing by an officer is not part of its mandate.

He suggested the police complaints commissioner would be better suited, but both offices were dealing with an organized phone blitz today, which successfully filled at least one voicemail system before 2 p.m.

In the end, there were three arrests with one charged.

The recording ends at the 7:42 mark, apparently before police back-up eventually arrived.

As for the man who was charged with drug and weapons offences, that is 30-year-old Derrick Coryaunt Allison and he remains in custody until a bail hearing on Thursday.