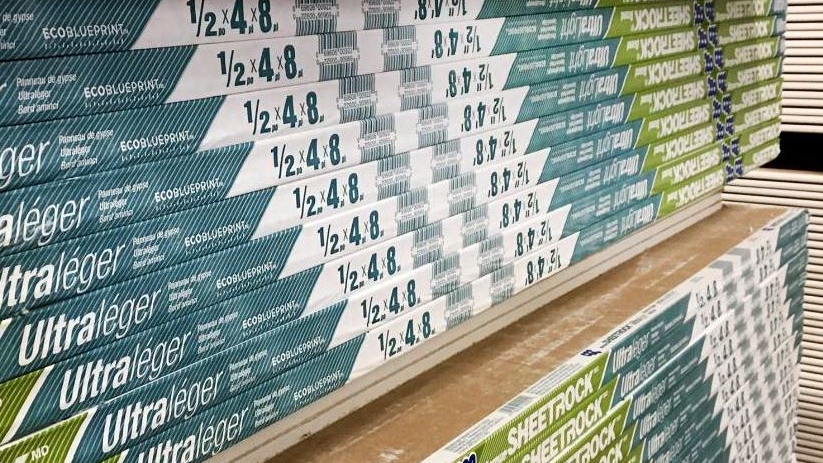 Wallboard is seen in a Halifax-area building supply store on Saturday, Feb. 3, 2018. (THE CANADIAN PRESS/Andrew Vaughan)

The federal government has quietly given a subsidiary of East Coast business giant J.D. Irving Ltd. more than $40 million in funding that an expert says could have trade implications for the New Brunswick firm.

However, records obtained by The Canadian Press through an access-to-information request show that the company, which makes gypsum wallboard products commonly called drywall, has not been required to repay at least $35 million.

In all, Atlantic Wallboard has repaid just over half a million dollars -- or 1.3 per cent of the total loans.

The funding represents a polarizing approach to economic development that critics dismiss as handouts for private companies, while proponents argue it spurs investments and creates jobs.

Both Irving and ACOA say the company has met all the financing conditions, exceeding its investment requirements and creating a sustainable, long-term business.

But an economics expert says the federal agency used "murky language" by calling the money conditionally repayable to describe what is effectively a subsidy.

Ian McAllister, who headed the regional development unit of the federal Finance Department in the early 1970s, questioned whether it was a manoeuvre to skirt trade rules.

"It's what I might call deliberate obscurity to try to not break the rules," said the retired Dalhousie University economics professor. "ACOA and the Irvings may not want clarity because it then puts them in a confrontational situation with the U.S. government."

McAllister added: "With NAFTA renegotiations at the moment, it's the last kind of thing they'd want to have out."

It's a suggestion that Irving spokeswoman Mary Keith dismissed, noting that imports of gypsum wallboard from Canada are estimated to account for less than one per cent of U.S. consumption.

The Saint John company, part of a conglomerate of forestry, shipbuilding and oil and gas companies founded in the late 1800s, is one of the newer branches of the Irving family enterprise.

The company produces several types of wallboard under license to CGC Inc., a subsidiary of USG Corp., distributed in Canada and the northeastern United States.

The roots of Atlantic Wallboard can be traced back to the early 2000s when Ottawa sought to reduce shipbuilding capacity in Atlantic Canada.

Overcapacity had been a recurring problem for Canada's shipyards, and between 1986 and 1993 the federal government provided nearly $200 million to spur an industry-led downsizing to curb capacity in Ontario, Quebec and British Columbia.

In 2003, the federal government ponied up cash for the East Coast, saying it would provide up to $55 million to help redevelop the Saint John shipyard site.

"The government made available a shipyard redevelopment fund if we committed to permanently close the shipyard and agreed not to build ships at the site for at least 15 years," Keith said in an email. "The Atlantic Wallboard business was developed as a result of the closing of Saint John Shipbuilding and the federal government making available the shipyard redevelopment fund."

She said the program called for matching dollar-for-dollar investments -- a requirement Irving has exceeded.

"We have complied fully with all aspects of the shipyard redevelopment fund and the investment has created a long-term sustainable business," Keith said. "The 10 year old conditionally repayable contribution (not a loan) was specific to the government of Canada's shipyard rationalization program to address the economic hardship caused by the loss of the shipyard in Saint John (SJSL) which directly employed over 3,200 people at peak."

The gypsum wallboard manufacturing plant now employs 91 people, in addition to rail and truck workers who move the product to markets, she said.

"Repayment was based on the project achieving certain success factors or milestones during the life of the agreement," he said by email. "The agreement terminated on November 28, 2015, when it reached its sunset date. No amounts were deemed repayable as the required milestones for repayment had not been achieved."

The following two conditionally repayable loans inked in 2011 and 2012 totalling $7.4 million remain active, with about $540,000 in principal repaid.

"Atlantic Wallboard LP remains in compliance with the terms of the contribution agreements and ACOA continues to monitor the projects," Bourgeois wrote, adding that "any repayment triggered indicates that the company has met the required milestones for repayment for those years of operation."

While $42 million is a substantial sum, it's still less than a quarter of the $200 million Ottawa set aside to help curb shipyard capacity elsewhere -- and a small fraction of the cash infusions provided to companies such as Bombardier Inc. or the auto sector in southern Ontario.

"In the big picture, it's peanuts," McAllister said. "It's a drop in the bucket."

He added that large companies like the McCains or Irvings have demonstrated entrepreneurial leadership in a depressed region, serving as "building blocks" for the economy.

"That's not to say they haven't gotten away with more than they should have, but they've been good for the welfare of the region in a big economic way."