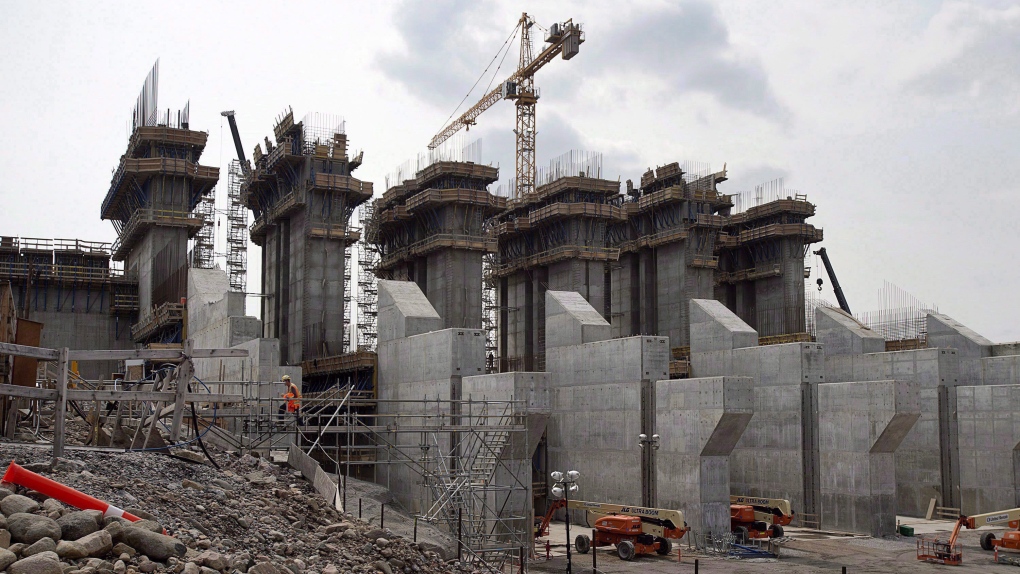 The construction site of the hydroelectric facility at Muskrat Falls, Newfoundland and Labrador is seen on Tuesday, July 14, 2015. (Andrew Vaughan / THE CANADIAN PRESS)
ST. JOHN'S, N.L. -

Ottawa and the Newfoundland and Labrador government have signed terms for two key pieces of a $5.2-billion financing agreement aimed at staving off a spike in provincewide electricity rates due to the beleaguered Muskrat Falls hydroelectric project.

"Muskrat Falls and the looming worry of doubling power bills has been a top concern of almost every single citizen in our province," Furey told reporters at the provincial legislature. "I've heard it echoed in every town, bay and community all over our beautiful province."

But Labrador's Innu Nation says the two governments moved ahead with the financing deal without addressing their concerns. In a news release shortly before Furey's announcement, the First Nation said it was "frustrated that no agreement to mitigate financial impact to Innu Nation has been reached."

The $5.2-billion deal between Ottawa and the Newfoundland and Labrador government was first announced in principle in July, just weeks before Prime Minister Justin Trudeau called the federal election. Aside from the $2 billion in investments and loan guarantees, Ottawa has also agreed to send annual transfers to the province equivalent to Canada's yearly net revenue from the Hibernia offshore oil project off St. John's. The transfers will continue until the end of Hibernia's life and are expected to total $3.2 billion.

The financial aid is aimed at preventing residential electricity rates from nearly doubling in order to pay for the project, though it's still unclear exactly what the electricity rates will be when the Labrador-based generating facility is producing at full power.

As of September 2020, Muskrat Falls' price tag had ballooned to about $13.1 billion, up from about $7.4 billion when it was sanctioned in 2012, though the project has since seen further delays. After missing the Nov. 26 goal to start generating power at full capacity, the province's energy corporation recently pushed the final commissioning date to the end of May.

Meanwhile, Newfoundland and Labrador Hydro has said the project is racking up $1 million a day in interest and financing charges.

As he addressed a small crowd in the provincial legislature Monday, Furey said the signing of the loan guarantee terms allows the governments to move forward and seek financing with the backing of Canada's credit rating. He called the latest development, "the next step for all of us to emerge from under the dark shadow of Muskrat Falls."

When asked about the Innu Nation, Furey said he had several "reasonable conversations" with the First Nation.

"We've extended our process agreement that was signed and we're in facilitation, but we've agreed not to talk (publicly) any further about the discussion points between the government of Newfoundland and Labrador and the Innu Nation," he said.

The Muskrat Falls site sits on the Churchill River in Labrador and its construction flooded Indigenous lands and hunting grounds. The Innu Nation has said the project required its approval to go ahead. Following last July's announcement of the financing deal, the Innu Nation said it had been left out of negotiations and was concerned the deal would impact the money it was entitled to from the project.

The First Nation took the matter to court in August but withdrew its application in September, saying it had reached an agreement with the federal and provincial governments to be included in discussions.

"Those discussions have not resolved outstanding differences," the First Nation said in Monday's news release. "Innu Nation and the province have since agreed to enter into facilitated discussions. Innu Nation retains their right to return to court."

As for the deal itself, federal Labour Minister Seamus O'Regan, who represents the district of St. John's South--Mount Pearl, said characterizing the financing agreement as Ottawa bailing out the province is "simply wrong."

"One of the elegant bits of this deal is that the $3.2 billion comes from Newfoundland's own resources," he said in an interview following the announcement. "It really is important to remind people that we are part of a country. This is not transactional, these are people. We are all Canadians, we look out for one another, and we look out for one another where we live."

This report by The Canadian Press was first published Feb. 14, 2022.