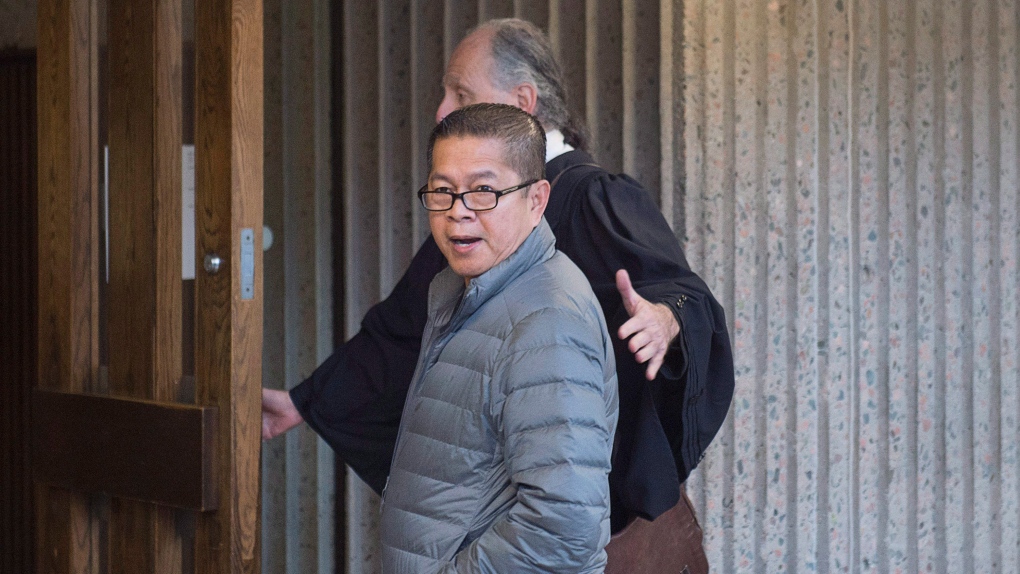 Hector Mantolino, charged with not paying Filipino temporary workers their required wages, arrives at Nova Scotia Supreme Court for his trial in Halifax on Tuesday, Dec. 5, 2017. (THE CANADIAN PRESS/Andrew Vaughan)

HALIFAX -- Liza Alcantara came to Canada from the Philippines with a dream to make a better life for her family.

On Thursday, Alcantara detailed how that dream was shattered to the point where she considered eating hard boiled eggs from a garbage bin while on a cleaning job at Halifax City Hall.

"Looking back now it sickens me that we would even think of grabbing food from the garbage just to feed ourselves," Alcantara told Nova Scotia Supreme Court while choking back sobs.

The 49-year-old was one of four Filipino workers who read emotional victim impact statements at a sentencing hearing for Halifax businessman Hector Mantolino. All recounted how they worked long hours for little pay and feared they might be deported if they objected to his demands.

Mantolino pleaded guilty last December to misrepresentation under provisions of the Immigration and Refugee Protection Act which prohibit providing "false or misleading information" to the federal government.

The operator of Mantolino Property Services Ltd. was originally charged in June 2013 with 56 counts of immigration fraud following a Canada Border Services Agency investigation, but those charges were rolled into a single indictment.

He was alleged to have counselled the workers to lie about their wages if they wanted to stay in Canada, with some saying they had stated they would receive a Canadian wage but were paid as little as $3.13 per hour after various deductions.

According to a joint statement of facts, Mantolino gave 28 workers contracts stipulating a rate of pay that he knew wouldn't be paid to them, and knowingly paid each worker less than the stated pay on their contracts and work permit applications.

The total difference between the stated amounts and the amounts actually paid to the workers is "no less than $500,000," according to the court document.

Alcantara said she started working for Mantolino's company two days after arriving in Canada in April 2012 and wasn't paid until a month later, although her contract called for bi-weekly pay.

She was then told she would have to pay Mantolino $2,000 for air fare and $100 a month for her rent. Alcantara said she was also told that her real salary would be $500 for 134 hours worked with only $5 for overtime.

"After he explained to me everything ... and gave me my first paycheque, I went to my room and cried in front of my aunt. I told her that I earned more in the Philippines than here."

"I couldn't afford to buy clothes for myself or a cup of coffee at Tim Hortons," she said, adding that the dollar store "was like our survival store."

Worker Joan Borromeo said Mantolino paid him less than an agreed hourly rate of $9.20 at his property cleaning service and charged him various fees including $500 for a work permit, $2,500 for an application for permanent residence, and a $1,000 bond that Mantolino said would be paid back, but wasn't.

Borromeo, 38, said that as a result both he and his wife struggled financially and became emotionally "stressed and depressed."

Adding to their stress was a six-week stay in a hospital ICU after the birth of child who needed open heart surgery.

"I am new here in Canada and I didn't know that you can take a leave or a paternity leave even just for a few days," said Borromeo.

Carrios, 39, said she couldn't imagine that a fellow Filipino "can destroy our lives here in Canada."

"Mr. Mantolino kept saying if I tell other people about his wrongdoing the Government of Canada will deport us to the Philippines," she said.

Carrios then made an appeal to Justice Glen McDougall.

"It is imperative, my lord, that when you decide his sentence, you remember all the lives destroyed with a single act of greed. All of his victims suffered so much."

Final submissions were supposed to be submitted by the federal Crown and defence on Thursday.

However, McDougall granted an adjournment after one of Mantolino's lawyers, Lee Cohen, was unable to attend court after a development with a case he is also working on in Charlottetown.

The sentencing hearing is now scheduled to resume Jan. 4. when more victims are to give impact statements.

McDougall has said that once the hearing is concluded he will reserve his decision.