Fiona closes in, hurricane and tropical storm warnings in effect

Fiona closes in, hurricane and tropical storm warnings in effect

After passing to the west of Bermuda, Fiona regained Category 4 strength as the maximum sustained wind near the eye of the storm came up to 215 kilometres per hour.

As forecast, Fiona continues to pick up speed in a northeastward direction -- now moving at 56 kilometres per hour. As of 2:15 p.m. Friday, the centre of Fiona was about 800 kilometres due south of Halifax. 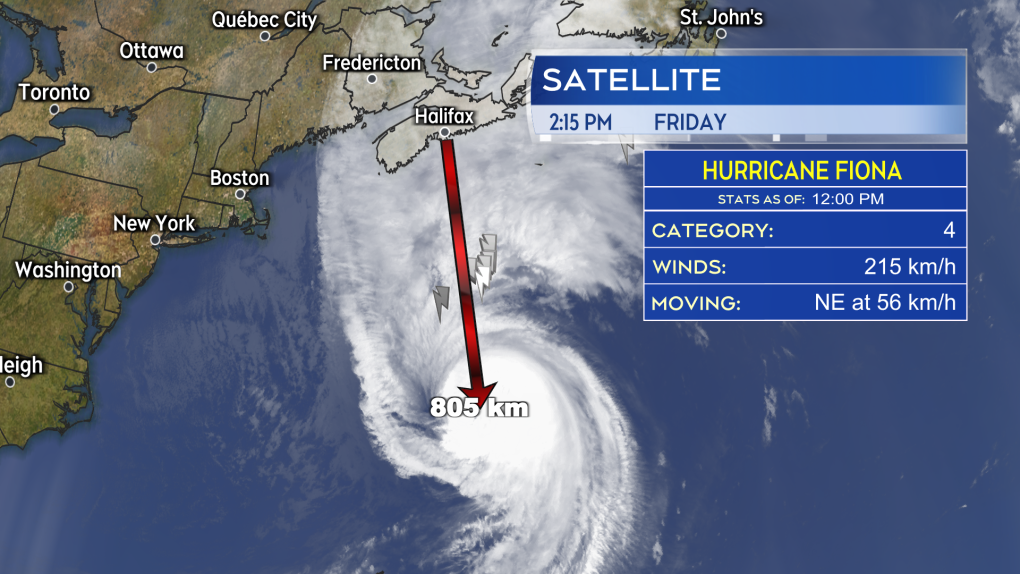 Hurricane Fiona is rapidly closing the distance towards Atlantic Canada, moving northeast at near 56 km/h.

Very little has changed with the forecast track of Fiona over the last 24 hours. The storm is expected to enter in the Scotia Slope marine district as a Category 3 hurricane Friday evening. A landfall as a severe post-tropical storm -- equivalent to a Category 2 hurricane -- is expected in eastern Nova Scotia early Saturday morning.

It looks increasingly likely the landfall point will be somewhere between Canso on the mainland and Louisbourg in Cape Breton, occurring near 5 or 6 a.m. Saturday morning. However, some change in landfall point and time is still possible.

After landfall, the storm will slow into Saturday evening, before the centre lifts to pass north near the western coastline of Newfoundland.

The storm will have broad and severe impacts to the Maritimes when it comes to wind, rain, and storm surge. Hurricane and Tropical Storm Warnings have been issued. Weather conditions deteriorate Friday night into Saturday morning. 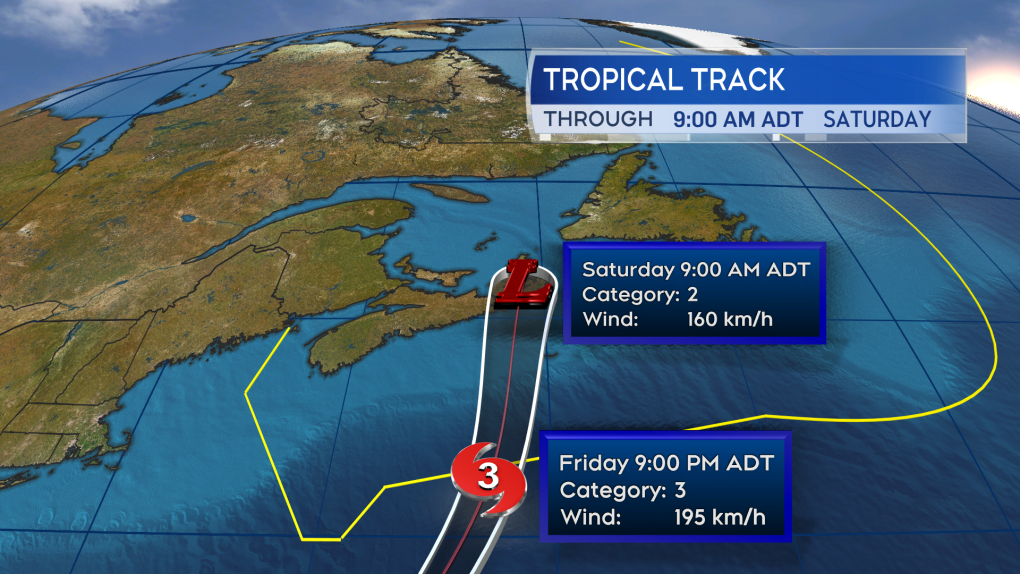 Little has changed with the forecast track of the storm over the last 24 hours. An expected landfall in eastern Nova Scotia as the equivalent of a Category 2 hurricane early Saturday morning.

In these areas, peak wind gusts could reach 120 to 150 kilometres per hour, creating a high risk of tree fall and potentially some damage to parts of structures, such as roofing material. Tropical storm force winds, which could include gusts 90 to 120 kilometres per hour, may extend much further to the west.

The remainder of Nova Scotia, the eastern half of New Brunswick, and the Bay of Fundy coastline are under a wind warning cautioning of that. Power outages are likely to occur as a result of those winds particularly as leaves are still on trees increasing the force of that wind against them. Wind will gradually diminish Saturday afternoon for western areas and Saturday evening for areas in the east. 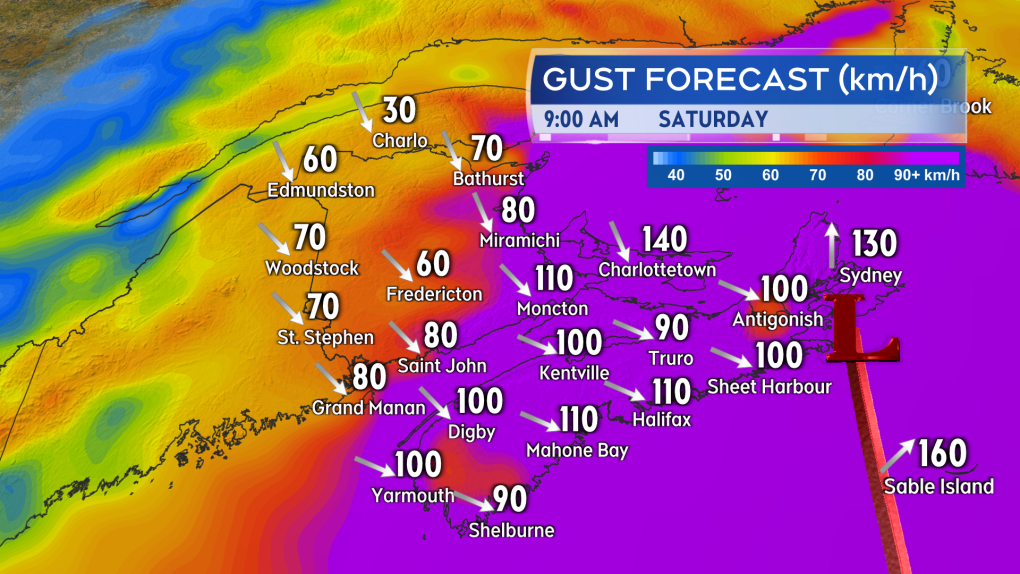 Wind becomes increasingly strong Friday night into Saturday morning for much of the Maritimes. The strongest expected in eastern Nova Scotia and P.E.I.

Heavy rain will accompany the storm for the eastern half of the Maritimes. The highest rainfall totals, and risk of flash flooding and washouts, are in eastern P.E.I and eastern Nova Scotia where 80 to 200 millimetres is possible. Rainfall rates will increase to become torrential Friday night into Saturday morning. The pounding rain will reduce visibility and create hydroplaning conditions on roads.

The amount and impact of the rain diminishes moving west into New Brunswick, west in P.E.I., and southwest in Nova Scotia. Rainfall Warnings have been issued for a large area of the Maritimes. 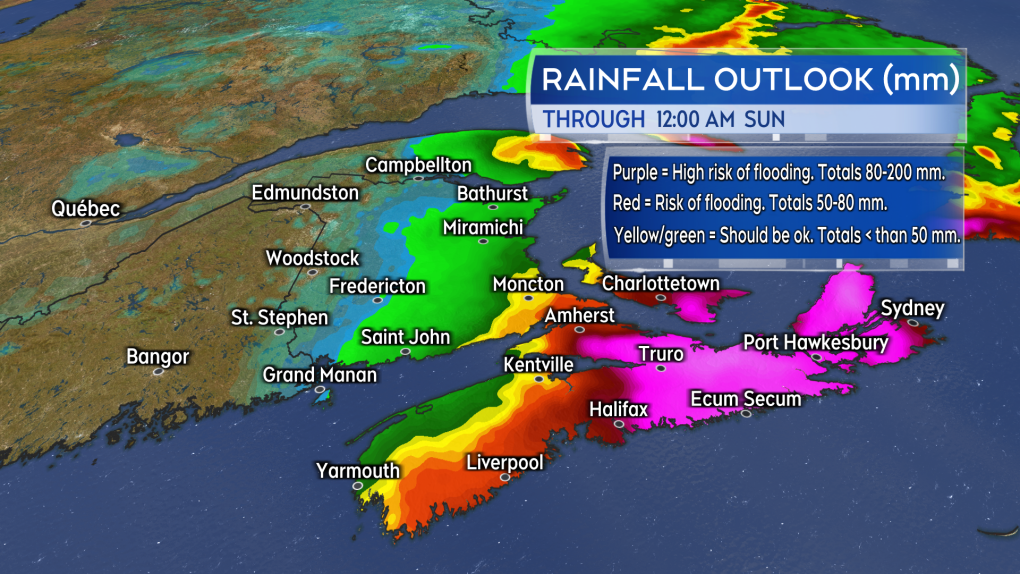 Torrential rain giving totals of 80 to 200 mm is expected in eastern Prince Edward Island and eastern Nova Scotia giving a risk of flash flooding and washouts.

Storm Surge Warnings are in effect for the eastern coastline of New Brunswick, the northern coastline of Prince Edward Island, the North Shore of Nova Scotia, Cape Breton, and coastal Guysborough County. There will be a combination of elevated water levels, high winds, and crashing waves in these areas. Risks include damage to coastal infrastructure, flooding, and erosion. Extra caution should be taken near the high tide occurring Saturday morning.

The risk of storm surge diminishes Saturday afternoon. Extremely large waves of eight to 12 metres – or 25 to 40 feet -- may be present near coastal areas of eastern Cape Breton. Those extreme waves are expected to break upon approach to shore. 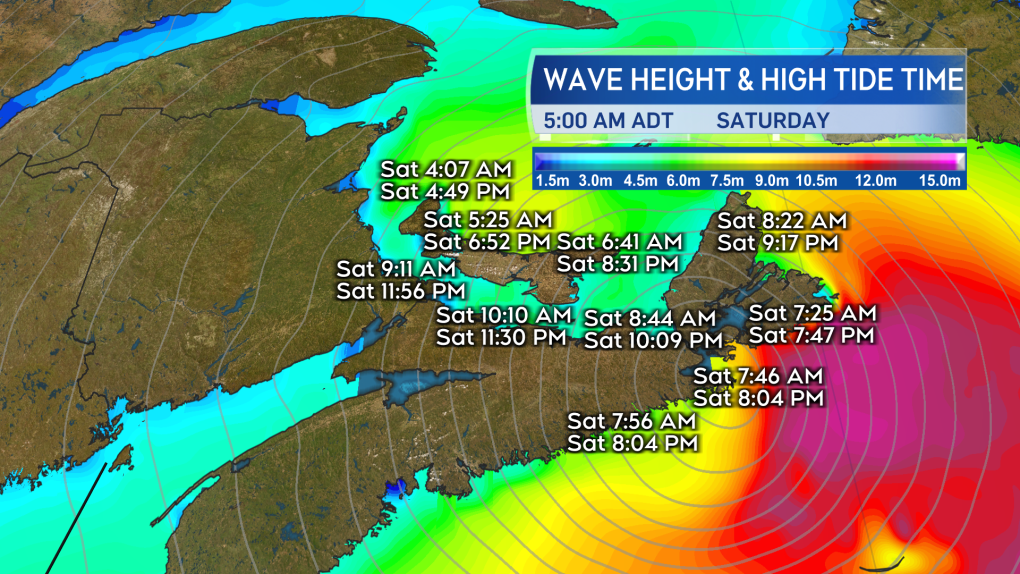 Intense wave action is expected for coastal areas of the east of the Maritimes. Extra caution should be taken at high tide Saturday morning. 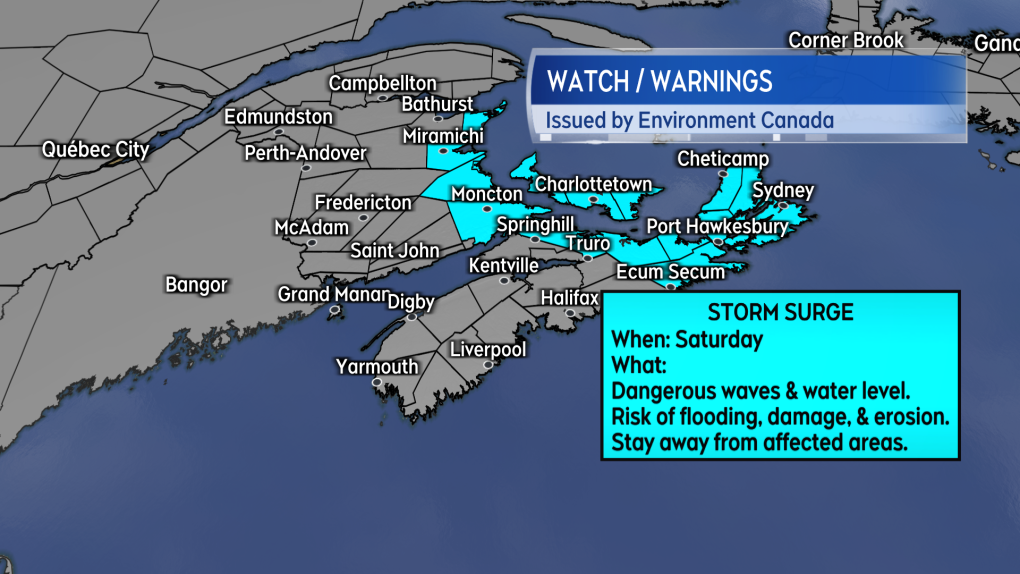 Storm surge warnings have been posted for parts of the Maritimes at greatest risk of damage, flooding, and erosion during passage of the storm.

The Magdalen Islands can expect similar storm impact as the northern coastline of Prince Edward Island. This includes a risk of peak wind gusts from the north of 120 to 150 kilometres per hour Saturday morning. Rainfall totalling 80 to 100 millimetres and the threat of storm surge Saturday morning until noon. The islands are under Rain, Wind, Storm Surge, and a Hurricane Warning.

Weather conditions gradually improve Saturday afternoon through Saturday night, west-to-east, for the Maritimes. Sunday forecast will be a mix of sun and cloud with a gusty west wind and high temperatures in the mid-to-high teens. It will likely take days to assess the damage from the storm and longer to fully recover for those areas hit hardest

CTV news will have live, comprehensive coverage in our live Fiona newscast special beginning at 6 a.m. Saturday. It can be watched on TV at CTV News, on the CTV News App, and on our website at ctvnewsatlantic.ca.

It's important residents continue checking the details of the latest weather warnings issued for their specific area.