HALIFAX -- Firefighters in Nova Scotia continued to battle three significant wildfires in three counties, including two fires that were brought under control, on Tuesday.

The Department of Lands and Forestry said dry conditions across the province fuelled the wildfires in Yarmouth, Kings and Antigonish counties, which all broke out on Monday.

“These fires start and they take off very quickly,” said Jim Rudderham, a spokesperson with the department, on Tuesday.

“It’s typical for us to have, any time we get a week or more of nice hot, dry weather like everyone enjoys, it doesn’t matter really what time of year it is during the fire season, these fires can start and we get multiple fires.”

Rudderham said conditions were more favourable on Tuesday, as there was more cloud cover and higher levels of humidity.

“The best part about today too is the humidity is up. Yesterday the humidity was quiet low, which makes the fires increase in size very rapidly,” he explained.

“The humidity will help them a little bit, but we really do need some rain, some good steady rain for a couple of days.”

Rudderham said all three fires are in remote, wooded areas of the province, so no homes were evacuated. 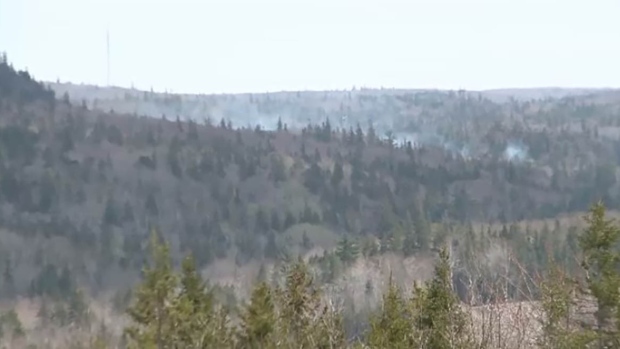 A wildfire is seen in the Frankville area of Antigonish County on Tuesday.

Lands and Forestry said Tuesday that the fire was roughly 150 hectares in size and considered “out of control.”

An incident command centre was established in the area. Twenty-two Lands and Forestry personnel, a helicopter and 31 volunteer firefighters returned to the scene Tuesday.

While the fire didn’t approach any homes, the councillor for the area said it had woodlot owners worried.

“Everybody’s definitely concerned,” said Neil Corbett. “It’s burned a few cabins up in the back, people who have cabins back there, but so far nothing major, and there’s no homes that have been line of the fire.”

By 5:45 p.m., Lands and Forestry said the fire was 75 per cent contained and considered under control. The helicopter has been released from the scene, but firefighters and Lands and Forestry personnel remain to watch for hot spots.

Update – Tuesday 9:15 PM – Fire remains under control. 148 ha and 75% contained. Crews are packing up for the evening and will return at first light to continue patrol.

Firefighters battled another significant wildfire in Kings County, near Springfield, N.S., on Tuesday.

Lands and Forestry said the fire is roughly 120 hectares in size. By 1 p.m. Tuesday it was 40 per cent contained, but still considered out of control.

Wildfire crews, several volunteer fire departments and a helicopter were on scene Tuesday.

By 5:45 p.m., Lands and Forestry said the fire was 100 per cent contained and considered under control.

Update – Tuesday 9:15 PM – Fire remains under control. 120 ha and 100% contained. Crews are packing up for the evening and will return at first light to continue patrol.

A third wildfire, which broke out late Monday afternoon, in the Argyle area of Yarmouth County was considered under control Tuesday.

The fire is estimated to be about 40 hectares in size.

Ten Lands and Forestry personnel returned to the site Tuesday to monitor the area.

“Last night when they left that fire, the crews felt pretty confident about it,” said Rudderham. “This morning in Yarmouth it was quite foggy and some rain … they were good for us, so we’re pretty comfortable with that fire right now.”

The cause of each wildfire will be investigated.

Update – Tuesday 9:15 PM – Fire remains under control and will be reassessed when weather clears. Crews are packing up for the evening and will return at first light to continue patrol.

Crews also responded to a wildfire in Grand Mira South on Monday.

The fire, which reached 8 hectares, was contained by 9 p.m.

It was considered under control on Tuesday and crews continued to monitor hot spots as a precaution. 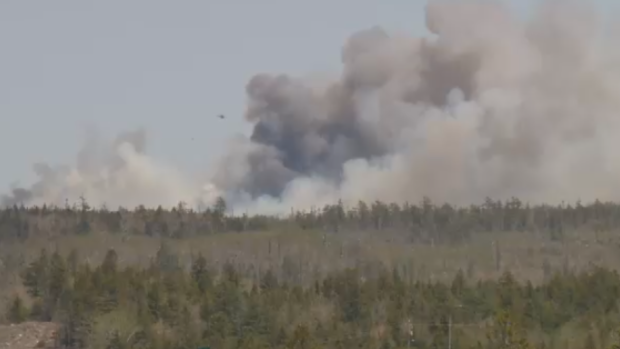 Thick smoke fills the air in Porters Lake on May 23.

A wildfire that started in the Porters Lake area on the weekend is also under control.

The fire started around 12:30 p.m. Saturday on the north side of Highway 107. It quickly intensified, prompting the evacuation of about 1,000 residents from their homes.

Dozens of firefighters responded to the scene, including three helicopters.

The fire, which reached roughly 50 hectares in size, was brought under control on Sunday, and residents were allowed to return to their homes.

No homes were lost.

There was a flare-up Monday, which forced officials to shut down Highway 107 between exits 18 and 20 for a few hours Monday evening.

Firefighters continued to monitor the area for hot spots on Tuesday.

A provincewide burn ban is in effect, which includes a ban on burning brush and backyard fires and fire pits.

Rudderham is urging Nova Scotians to abide by the burn ban and be extra cautious when in the woods.

“Absolutely no fires, and if anyone is out in a wooded area doing anything, to be extremely careful with anything that could start a fire. It’s just so dry, we have enough work to do, we don’t need anymore right now,” he said.

“We always worry about the safety of the crews out there. Fighting fires is hard, difficult work and dangerous work at times."