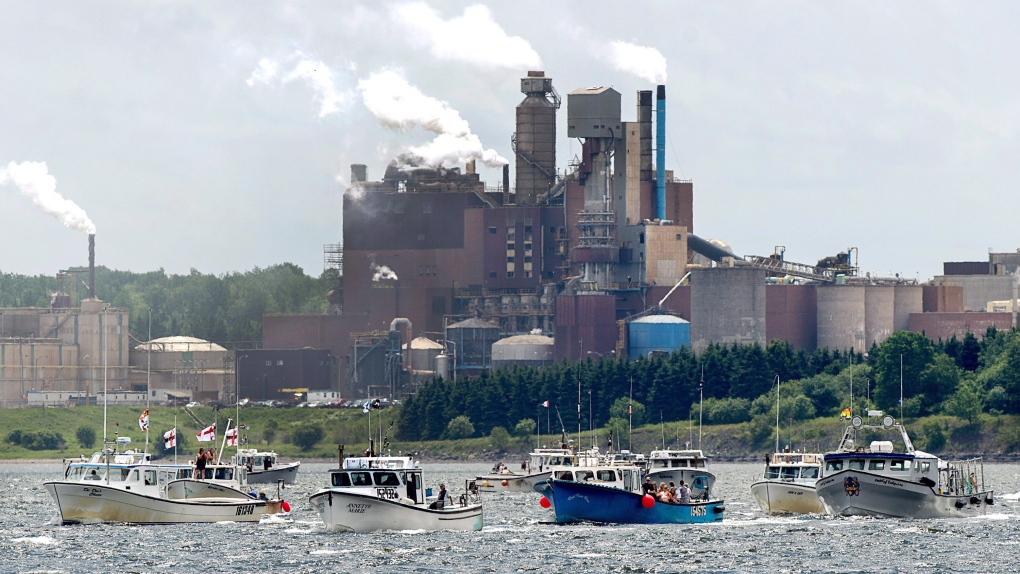 Fishing boats pass the Northern Pulp mill as concerned residents, fishermen and Indigenous groups protest the mill's plan to dump millions of litres of effluent daily into the Northumberland Strait in Pictou, N.S., on July 6, 2018. (THE CANADIAN PRESS/Andrew Vaughan)

HALIFAX -- The Nova Scotia government decided Tuesday to withhold its approval of a pulp mill's plan to build a pipeline to dump 85 million litres of treated effluent daily into the Northumberland Strait.

However, the fate of the Northern Pulp mill near Pictou, N.S., which supports thousands of jobs across the province, remains unclear.

Here are five things you need to know about one of the most contentious issues in Nova Scotia:

1. A key deadline is looming.

The mill, in operation since the 1967 under various owners, has faced consistent criticism for its poor environmental record.

It has been dumping treated effluent into lagoons near the Pictou Landing First Nation for decades, and successive provincial governments have reneged on promises to clean up the once-pristine estuary.

Former Nova Scotia environment minister Iain Rankin once referred to the toxic mess at Boat Harbour as one of the worst cases of environmental racism in Canada.

In 2015, following a serious pipeline spill near the Mi'kmaq community, the province's Liberal government passed the Boat Harbour Act, which orders the mill to find a new way to get rid of its effluent. The law states the company must stop dumping into Boat Harbour by Jan. 31, 2020.

2. The mill could close in the days ahead.

In January 2019, one year before the Boat Harbour deadline, Northern Pulp made it clear it was having a tough time coming up with a plan to build a new treatment plant for the mill and move the treated effluent through a pipeline into the strait.

At the time, the company asked for a one-year extension.

Without the extension, the company made it clear the mill would be forced to close, eliminating about 300 jobs.

However, Premier Stephen McNeil has consistently stated the company has been given more than enough time to comply with the legislation. "The deadline is the deadline," he said at the time.

The company has said another 2,400 forestry jobs depend on the mill.

In July, dozens of fishing boats steamed towards the hulking pulp mill at the southern end of Pictou Harbour, marking the climax of a boisterous demonstration that saw more than 1,000 protesters call on the mill's owners to scuttle its pipeline plan.

Fishermen in Nova Scotia, Prince Edward Island and New Brunswick say the pipeline will hurt the local lobster fishery, as well as other smaller fisheries.

Some residents in nearby Pictou, who have long complained about the mill's recurring stench, have said the pipeline could hurt tourism along the strait between Nova Scotia and P.E.I.

Andrea Paul, the chief of the Pictou Landing First Nation, has said she and her people will not tolerate an extension to the deadline.

The mill's owner, B.C.-based Paper Excellence, has said about 20 per cent of the 131 kraft mills operating in North America use a system like the one being proposed by the company. The remaining 80 per cent use a system similar to the lagoons now in use at Boat Harbour.

Company spokeswoman Kathy Cloutier has said the $70-million project would reduce the mill's requirement for bleaching chemicals by 30 to 40 per cent.

Cloutier said if the province rejects the request for a deadline extension, the mill will not break the law by continuing to dump effluent into Boat Harbour.

5. The forestry industry already in trouble.

Last August, an independent review found Nova Scotia's forests are under stress and harvesting practices "have left a legacy of impoverished forests."

Private woodlot owners say they are struggling to survive because of the low prices for wood.

However, some harvesters note that if Northern Pulp were to close, there would still be a pulp mill to feed in Port Hawkesbury, N.S., as well as international markets for wood chips and sawdust.

This report by The Canadian Press was first published Dec. 17, 2019.