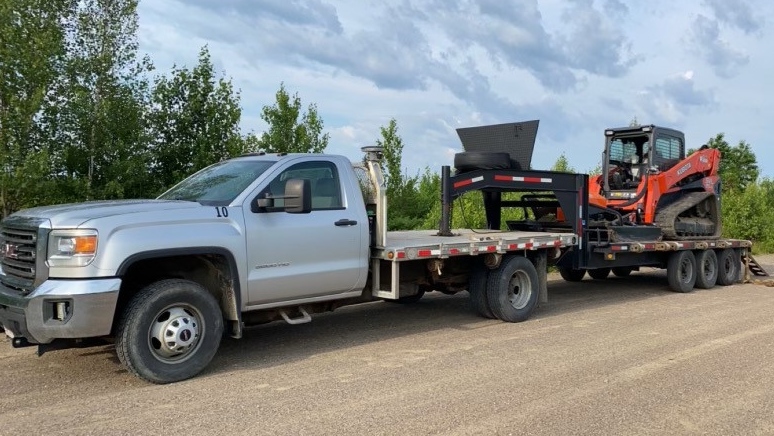 Police in Village-Saint-Laurent, N.B., are turning to the public for help locating a stolen flatbed truck, a trailer and a track loader.

Northeast District RCMP says the equipment was stolen from a local business.

Police believe the theft happened when individuals broke into the business on Route 11 between 10 p.m. and 11 p.m. on Sunday.

“The individuals would have stolen keys to a flatbed truck that was parked outside, and fled the scene with the truck, attached trailer and a track loader that was on the trailer,” police wrote in a news release.

The trailer is described as a black 2007 Linkletter’s Gooseneck flatbed with the N.B. license plate number TTF 237.

The track loader is described as an orange 2018 Kubota SVL95 compact track loader with the N.B. license plate number M51341.

Police are asking anyone who may have information about the theft, who witnessed suspicious activity in the area, or who has seen the truck, trailer or track loader, to contact Neguac RCMP at 506-776-3000.

Dozens of Florida residents left their flooded and splintered homes by boat and by air on Saturday as rescuers continued to search for survivors in the wake of Hurricane Ian, while authorities in South Carolina and North Carolina began taking stock of their losses.