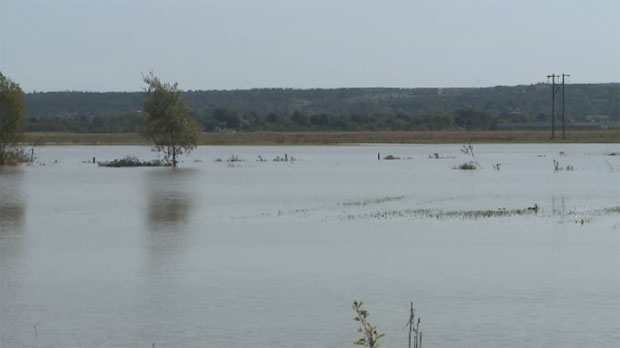 A portion of farmer Brian Yuill's fields are still under water after Monday's rainstorm.

Flood waters have receded through much of Truro and surrounding communities, but it’s still not as dry as many would like.

Some farm fields are still under water, including those of Brian Yuill. Much of his dairy herd remains stuck in his barn in Onslow, N.S. due to the submerged fields.

“Well, normally the cows are pastured down there, the dry cows and heifers, and then our milk cows, and we have 65 acres of corn also down there,” says Yuill.

Farmer Jim Lorraine is having better luck. He says a dike he built on his property was able to keep the water out, when the province’s dikes could not.

Lorraine says flood waters breached dikes maintained by the province Monday because they are too low and too narrow. He built his own dike ten years ago and suffered little damage.

“We’ve got $1 million or more probably in road damage and it’s probably only $1 million to fix the (province’s) dikes,” he says.

There was also extensive damage to Atousa Costandi’s family furniture store. She estimates the damage at over $300,000.

The Costandi family lives above the store and they aren’t taking any chances with their well.

“We don’t drink it or use it until we have it tested,” says Costandi. “Last time it flooded it wasn’t a problem with the water, but this time it may be a problem.”

There are more than 130 units at a storage facility in nearby Bible Hill and each unit suffered major damage in Monday’s flood.

The cleanup is expected to continue well into next week.