For Nova Scotia mother of scallop fisherman, a painful wait for her son lost at sea 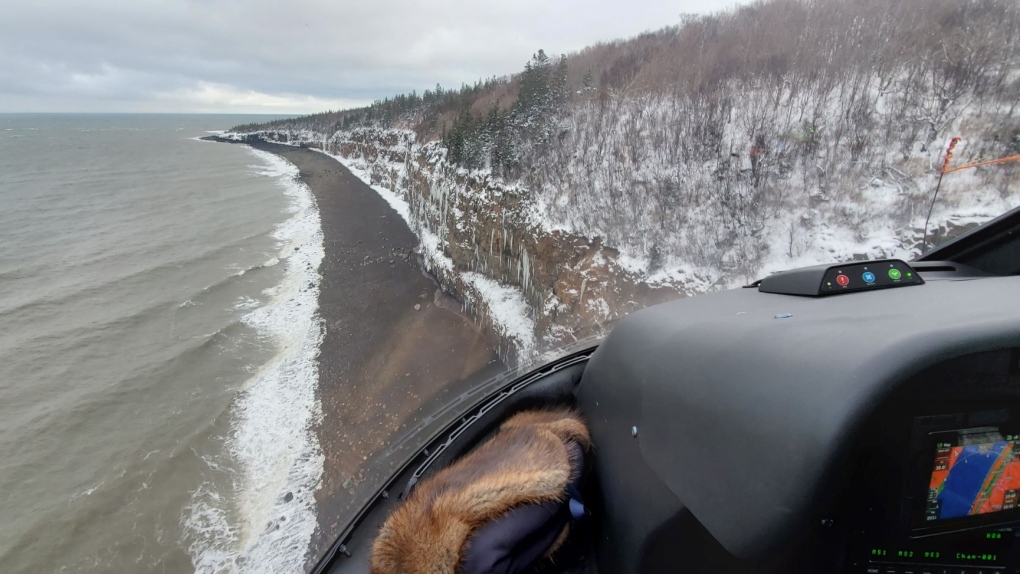 A Nova Scotia Department of Lands and Forestry helicopter working with the RCMP search the coastline between Hillsburn and Morden in N.S. on Friday Dec. 18, 2020. The aerial search for five fishermen who were working on a scallop boat when it sank in the Bay of Fundy has been suspended until Sunday, and the ground search has been called off indefinitely. THE CANADIAN PRESS/HO-RCMP

HILLSBURN, N.S. -- For Lori Phillips, waiting for news of a son lost at sea is painful, as she says closure could begin with his body's return from the Bay of Fundy.

An aerial search continued Sunday for some sign of the five fishermen, including the captain, who haven't been found since Tuesday's early morning sinking of the scallop dragger Chief William Saulis off Nova Scotia's southwest coast.

As of Sunday at 4 p.m. local time, crewman Michael Drake is the only one of the six people on board whose body has been recovered by search teams.

Phillips says she hopes desperately her son Aaron Cogswell and the others still missing can be located as well, whether by searches or raising the vessel.

The continuing care assistant in the Annapolis Valley has had a trying year, looking after elderly residents in a Berwick, N.S. long-term care facility during the COVID-19 pandemic, and recently grieving the death of her father-in-law.

"I want my son home. I want to have something that I could go to," she said in a telephone interview.

"I need his body, I need closure and to talk to him."

Drake's younger sister, Raelene Carroll, has confirmed in an earlier interview with The Canadian Press it was her brother whose body was recovered Tuesday.

Drake, 48, was from Fortune, N.L., on the province's Burin Peninsula.

Phillips described her son as a man who loved to be busy, whether at home or on the sea. "The busier it was, the happier he was," she recalled.

He enjoyed working in the fishery, but Phillips constantly worried about him. "You often had a feeling something would happen ... Whenever the wind would blow, I'd be a nervous wreck," she said.

She was remembering on Sunday that her son loved working on the sea, and has shared a movie on social media of Cogswell playing air guitar on a shovel during a lull in the on-board work.

"If you see the video with the smile on his face, you know he died doing what he loved," she said.

He's been fishing 11 years, often as a crew with Roberts, said Phillips.

Phillips says she's anxious to have a daily call from the RCMP and search officials to let her know how the effort is proceeding, "just to let me know where things are going."

As of mid-Sunday afternoon, an aerial search had not yielded any signs of the men or of the boat, said Sgt. Andrew Joyce, an RCMP spokesman providing updates on the search.

"We are all in this together. We want to find these five fishermen ... to bring closure to all. It's affected our whole province. We feel it even more so especially at this time of year," he said in a telephone interview on Sunday.

Asked how long the search will continue, Joyce said it will be assessed each day.

"Hopefully, we will locate them before we will make the very, very difficult decision of ending (the search)... It isn't a decision we look upon lightly," he said.

The ground search has been ended due to safety considerations, after one ground searcher fell and suffered an injury. "The venture was too dangerous to risk having another tragedy," said Joyce.

The 15-metre scallop dragger is owned by Yarmouth Sea Products, which said in a Thursday news release the boat had been operating out of Digby.

The owners said "an unknown event" caused the vessel to capsize as no distress call is known to have been made by radio.

The Joint Rescue Co-ordination Centre in Halifax was alerted to a problem Tuesday at 5:50 a.m. local time when it received a signal from the boat's Emergency Positioning Indicating Radio Beacon, a device that is automatically triggered when submerged.

The black box which tracks the vessel's progress was checked by the company and the firm said it was determined the dragger left the fishing ground at approximately 1 a.m. on Dec. 15.

The company says that on Monday, the forecast indicated that the weather would deteriorate later in the day and into Tuesday and that as a result, vessels departed the fishing grounds in the bay and were heading back to Digby.

Richard Karsten, a professor of mathematics at Acadia University in Wolfville, said in an interview Sunday that at the time the emergency signal was received, tides were low in that area of the Bay of Fundy.

As the tides were ebbing, flowing out of the bay, they would have been colliding with the forceful winds coming in the opposite direction, causing large waves and swells, he explained.

Karsten, who does numerical modeling of ocean tidal flows, said with two- to three-metre waves and swells coming up the bay, it could create dangerous surf.

"When you have current going against the waves, it compresses the wave together. A long, smooth swell can be compressed and become a sharper, compressed wave, like on a beach," he explained.

The bay's powerful tides could make it difficult to find and retrieve the vessel, depending on how deep the water is where it went down, he said.

This report by The Canadian Press was first published Dec. 20, 2020