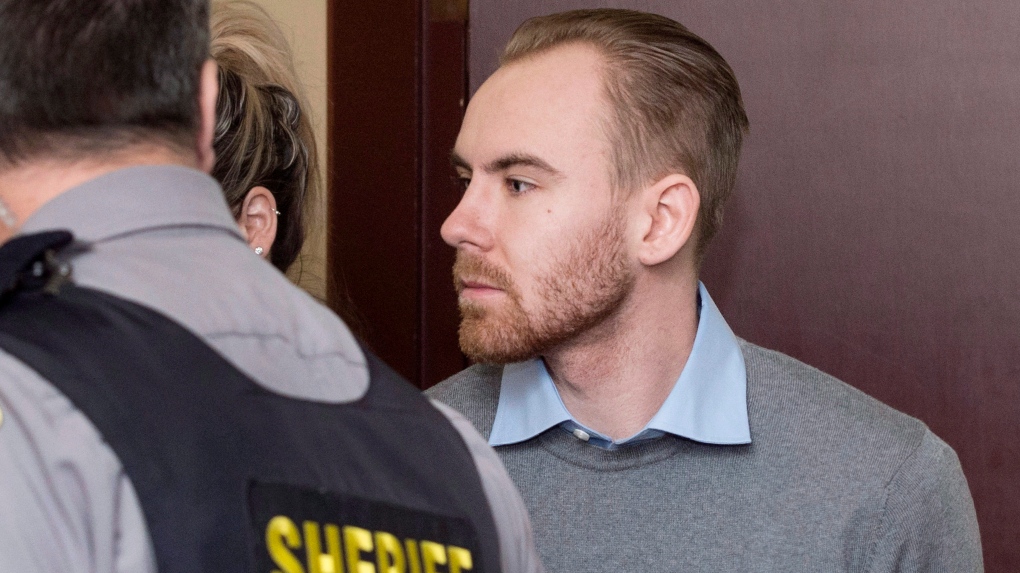 William Sandeson is escorted into his preliminary hearing at provincial court in Halifax on Thursday, February 11, 2016. Sandeson is charged with first-degree murder in the death of Taylor Samson, a fellow Dalhousie University student, who was last seen on Aug. 15, 2015 and whose body has not been found. (THE CANADIAN PRESS/Darren Calabrese)

HALIFAX -- A former Nova Scotia medical student whose murder conviction was overturned last year failed on Friday in his bid to be released on bail.

William Sandeson, who was also a promising track athlete, has been in custody since his arrest in August 2015. He was convicted in 2017 of the first-degree murder of Taylor Samson, who like Sandeson was a student at Dalhousie University in Halifax.

During Sandeson's trial, the court heard he fatally shot Samson during a drug deal at Sandeson's Halifax apartment on Aug. 15, 2015. Sandeson was sentenced in July 2017 to life in prison with no chance of parole for 25 years. Samson's body has yet to be found.

Nova Scotia's top court ordered a new trial last year, saying the lower court judge had infringed on Sandeson's right to a fair trial. The Nova Scotia Court of Appeal said a mistrial should have been declared because the Crown had withheld key information from Sandeson's lawyers until his trial was well underway.

Sandeson's defence team asked for a mistrial when they learned a private investigator they had hired, Bruce Webb, had secretly told police about a key aspect of the case.

The court heard that Webb interviewed two of Sandeson's neighbours, both of whom initially told police they didn't see or hear anything the night of the crime. But when Webb talked to them, they admitted they had seen a badly injured man in Sandeson's apartment.

That's when Webb told an investigator it would be wise for police to conduct another interview with the two men, which they did.

The trial judge, however, decided the information was not material to the case.

On Friday, Nova Scotia Supreme Court Justice James Chipman denied Sandeson's application for bail pending retrial, but the reasons behind the decision are protected from publication by a court-ordered ban.