A former Fredericton man now living in Calgary, Alta., will be home for the holidays.

James Morrison was a big contest winner at the gold medal game during the 2022 World Junior Hockey Championships in Edmonton this past summer.

A team from Tourism New Brunswick tossed out dozens of t-shirts into the stands and Morrison was fortunate enough to have the Golden Ticket inside his.

The surprise and thrill of winning the Golden Ticket still hasn't worn off for the hockey fanatic.

“It's funny, my friends who were with me and a couple of kids said, 'you're usually a pretty quiet guy and that's the most excited I've ever seen you,'” said Morrison from his home in Calgary.

“I've coached those three kids for a while and they were pretty excited for me. I think it was just the realization of winning a trip and getting to go home and seeing my family again.”

Morrison received a prize worth $12,000 that includes a flight to Moncton, N.B., a hotel stay, a car rental and tickets to three consecutive games at the 2023 championship.

Better still, Morrison and his 10-year-old son will get to see his parents and two siblings who live in Fredericton.

“I've won a free lottery ticket every now and then on Lotto 6/49, but nothing to this magnitude,” he said. 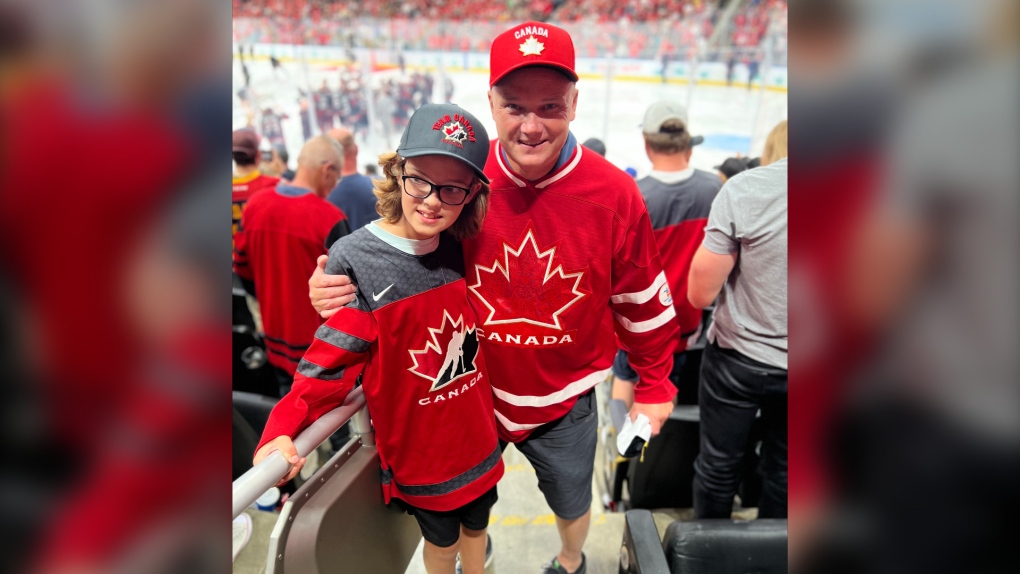 James Morrison and his son, J.V. Morison, are pictured at the 2022 World Junior Hockey Championships in Edmonton. (Courtesy: James Morrison)

Being a co-host for this year's junior championship was an opportunity for Tourism New Brunswick to put the province on the map during the international event in Edmonton.

Katie Kohler, the director of strategic marketing at Tourism New Brunswick, said the tournament in Edmonton was an amazing opportunity to leverage the spotlight of the championship in Moncton.

“We had the Hopewell Rocks projected on the ice. We shot t-shirt cannons and we threw t-shirts all around the audience until one lucky winner, who just happened to be from New Brunswick, won that Golden Ticket and a chance to come home,” said Kohler.

So, what is Morrison looking forward to the most? Seeing his family, or going to the games?

“Tough question because I'm sure my mom is going to see this,” laughed Morrison. “We'll love to see the family and then of course my son and I can watch hockey all day long. Some days we have three games and he'll watch it, analyze it and learn from it. Between the family and the friends, it's tough to choose between the two.”

The tournament starts in Moncton and Halifax on Dec. 26 and runs until Jan. 5.