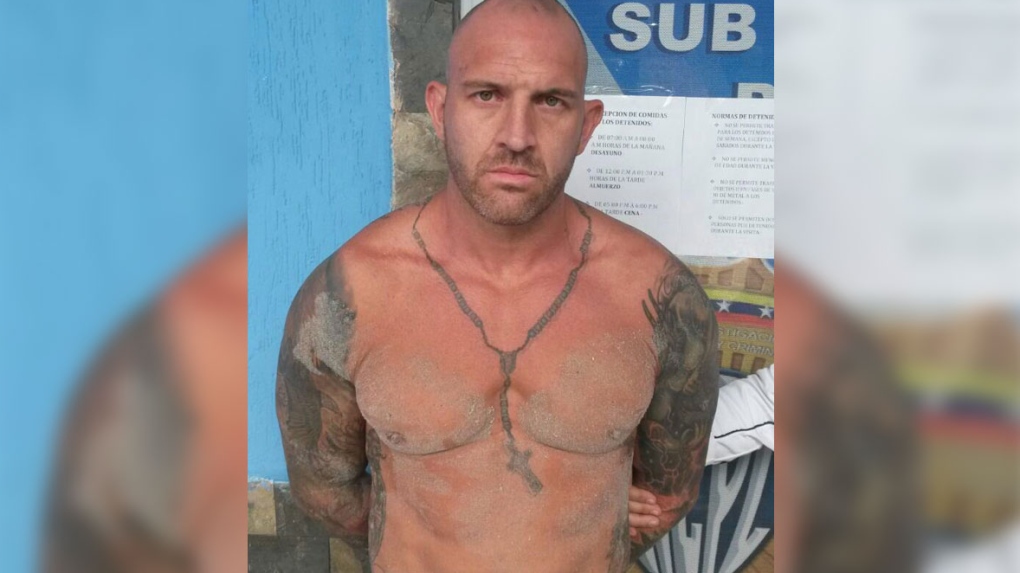 Steven Douglas Skinner is shown after being arrested in Playa El Yaque, on Margarita Island in Venezuela. (THE CANADIAN PRESS / HO - CICPC)
HALIFAX -

A man who was a fugitive in Latin America for five years after fatally shooting another man in Nova Scotia is out of prison on day parole.

Steven Douglas Skinner was handed an 11-year prison sentence for manslaughter in September 2019 in the April 2011 death of Stacey Adams in Lake Echo, N.S.

Skinner was initially charged with second-degree murder but pleaded guilty to the manslaughter charge after a deal was struck between Crown prosecutors and his defence lawyer just before his trial.

At the time of his sentencing Skinner, was given five years credit for the time he spent in custody awaiting trial, leaving six years to serve on his prison sentence.

An international warrant was issued for Skinner's arrest shortly after Adams' death, and he was accused of being a drug cartel "kingpin" by South American authorities, an allegation he denied at a Parole Board of Canada hearing last fall.

Under Skinner's six-month day parole granted Oct. 29, he must live at a halfway house and return nightly, while abstaining from drugs and alcohol. He can't associate with known criminals or have contact with the family of his victim.

According to hearing documents, Skinner told the board that he initially fled to Mexico because he believed his life was in danger and his family was at risk as well.

He said he staged his own death in Mexico over concerns that there was a "contract" out on his life, and later moved on to Panama and Venezuela. Skinner told the board that sufficient time had passed since he killed Adams and he believed the contract is "no longer an issue."

In granting the day parole, the board noted Skinner had not caused problems while in prison, and it determined that his risk to reoffend was "manageable on day parole."

Skinner was arrested by Venezuelan law enforcement on Margarita Island in 2016, and was extradited to Canada in 2017.

This report by The Canadian Press was first published Jan. 26, 2022.

The actions -- or more notably, the inaction -- of a school district police chief and other law enforcement officers moved swiftly to the centre of the investigation into this week's shocking school shooting in Uvalde, Texas,

Russia asserted Saturday that its troops and separatist fighters had captured a key railway junction in eastern Ukraine, the second small city to fall to Moscow's forces this week as they fought to seize all of the country's contested Donbas region.