Last year, Iso opened a tailoring shop at the mall in Bridgewater, N.S.

“That’s so busy, yeah, so busy. I come like 8:30 and the mall closed right, all shop, I come first one because I need to finish you know,” he said.

With his tailoring business doing well, the former Syrian refugee decided to open a second business across the hall in the same mall, called Rezan. The store is full of hundreds of different suits and accessories. 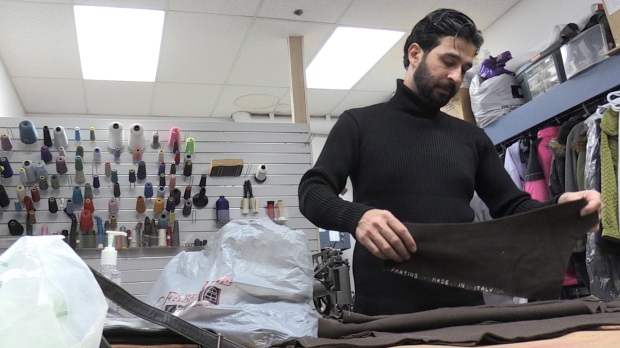 Before coming to Canada, Iso lived in Damascus, Syria and Istanbul, Turkey. When he came to Nova Scotia three years ago as a Syrian refugee, Iso started working with Anna Shoub, a hat-maker in Lunenburg.

“He was wonderful. He’s very funny and entertaining and actually not speaking the same language was fun because we’d sort of teach each other, he’d teach me a little bit of Kurdish and I would teach him English and, you know, we managed to get by in the language of sewing,” said Shoub, who owns The Hat Junkie.

After a few weeks working together, Shoub decided to start an online fundraising campaign to help Iso go out on his own.

“I started a GoFundMe and just put that ask there, that Rezan needed an industrial sewing machine and a table and a few other things and I calculated the cost and within 24 hours, we had got all the money that I asked for and it was just that simple,” said Shoub.

“The word got out there that he could do alterations and tailoring and make clothing. So, just little by little, people were bringing him things, he was working from his home and then he had a space that he found, another temporary space and then he now in the mall.”

His hope is to grow his company even more.

“I hoping just I make something here and send it to all Canada first,” said Iso.