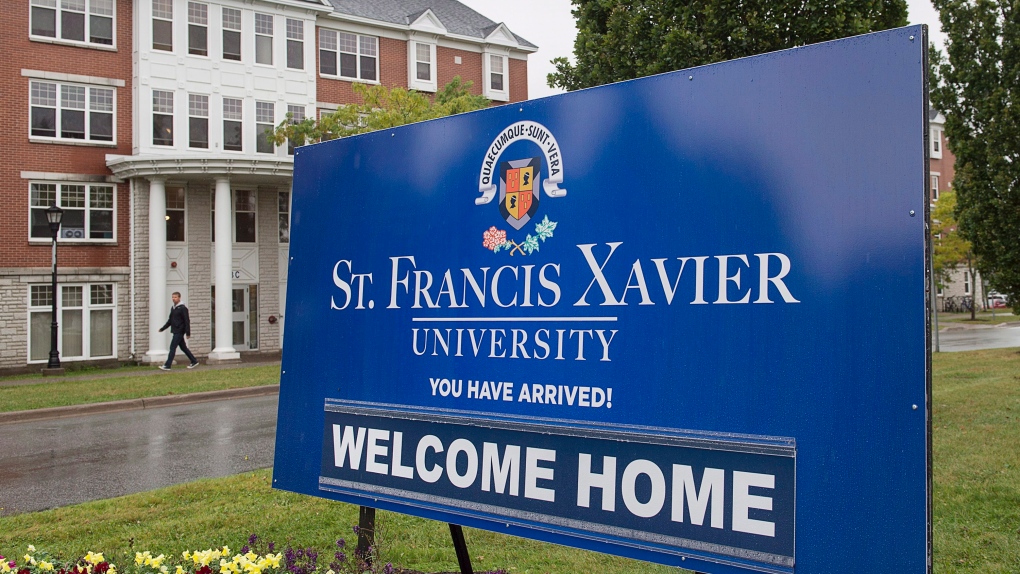 A sign marks one of the entrances to the St. Francis Xavier University campus in Antigonish, N.S. on Friday, Sept. 28, 2018. (THE CANADIAN PRESS/Andrew Vaughan)

HALIFAX -- Nova Scotia Mounties have handed out summary offence tickets to four university students for failing to self-isolate for 14 days after arriving from outside the Atlantic bubble.

Police says three of the students were in Antigonish and one was in Wolfville.

"Upon further investigation, RCMP officers determined that the individuals were in violation of Health Protection Act," the RCMP said in a news release.

Police issued each of the students a ticket under the Health Protection Act for failing to self-isolate. The tickets come with a $1,000 fine.

"The Nova Scotia RCMP is reminding people arriving in Nova Scotia from outside of the Atlantic Bubble to follow all Public Health orders, including completing a self-isolation period of 14 days," the news release said. "We ask everyone coming into the province to educate themselves on the directives and enforcement measures at https://novascotia.ca/coronavirus/. We all need to do our part to reduce the spread of COVID-19."

This is not the first case of university students failing to follow the self-isolation guidelines. In August, there was a case at Universite Sainte-Anne and another case at St. Francis Xavier in Antigonish.

"I know isolating is not easy," said Premier Stephen McNeil during a news conference in Halifax Wednesday afternoon. "You would rather be out socializing, but it is necessary."

Since Aug. 20, 3,200 students have arrived in Nova Scotia from outside of the Atlantic bubble, said Dr. Robert Strang, Nova Scotia's chief medical officer of health.

"For the most part, they are doing or have completed their 14 days of self-isolation and their COVID-19 tests," Strang said. "Compliance with a digital check-in is very good. The fact we’ve only had three cases among the first 3,200 students bodes well. That’s good news for all of us. It’s good news in two ways -- it shows that the risk from students is relatively low, but it also shows that our strategy worked."

Strang thanked post-secondary students who are following the rules and had a message for those who are not.

"For the small minority that isn’t doing this, or isn’t doing what they’re supposed to do, I ask them to please think about the potential impact on their friends, their neighbours, their fellow students and university and the general community that they are now part of. It’s very important that we all do what we can do to keep each other safe," he said.

Strang said that even though Nova Scotia's case numbers are low right now, it's important to remain vigilant because there are more positive cases being reported across the country.

"The social factors that often go with this age group, there are significant risks and we need to all be careful and really need to work together, even while you’re here for university, and socializing is part of that," he said. "We need to socialize, but socialize safely. It’s important that students understand this and that our communities are doing what we can to support students in this."

From surge beds to flu vaccines: B.C. shares $1.6B plan for managing COVID-19 this fall, winter

Cats may be contracting COVID-19 at a higher rate than thought before: study

There may be another use for coronavirus-fighting T-cells: Destroying cancer

Here's what back-to-school looks like in Nunavut, Canada's only region with zero COVID-19 cases