Complications with pneumonia sent him back to hospital three and a half months ago – first to Charlottetown, then Halifax and Toronto.

On Monday, he was finally able to leave hospital care at the IWK in Halifax.

"Maverick is doing awesome," says Woodrow Bishop, his father, "They had told us to expect to be in the ICU for seven to 10 days. He got out on day three."

He's a big fan of superheroes, Batman and Spider-Man to be specific, but many are saying he's a superhero himself.

"I wanted to send you some strength," says Nick Foligno, a forward for the Toronto Maple Leafs, in a video message recorded for Maverick after hearing his story.

"You are one of the toughest kids out there," added Foligno in the video.

He's received support from the Toronto Maple Leafs, the Charlottetown Islanders, from his daycare, and a Nova Scotia pilot who dedicated a flight to him. 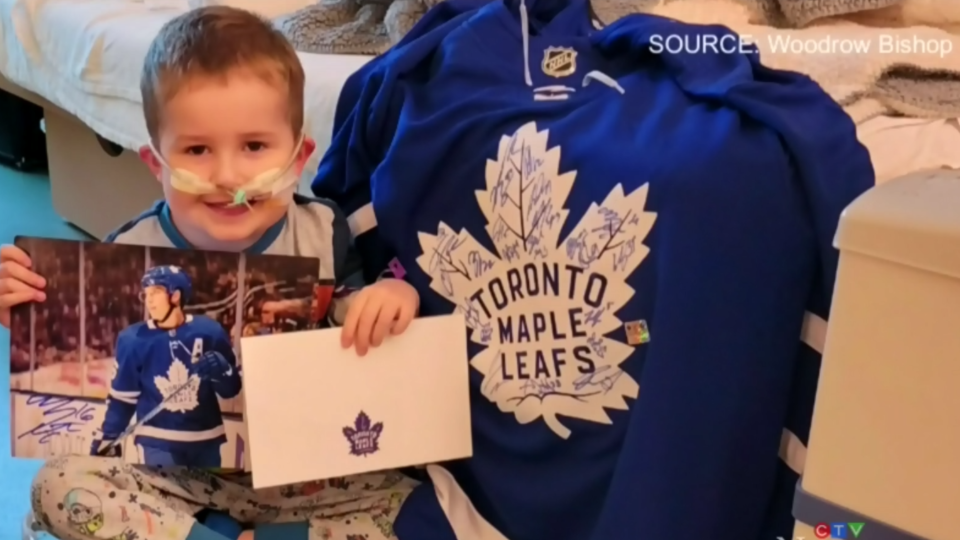 Maverick poses with his signed photo and jersey from the Toronto Maple Leafs. (Photo: Woodrow Bishop)

But, his father says Maverick's seven-year-old sister is one of his biggest supporters.

"She was his superhero too, he just kept calling her," says Bishop. "He was so determined to get home to see his sister."

On Monday, they reunited – though only through a glass window for now, as quarantine rules are keeping them apart for 14 days.

"We're just going to be living one day at a time," says Marie-Eve Roy, Maverick's mother. "Enjoying every moment with him, and just the simple things that are the most precious."

A point they've arrived at, after a long and challenging journey.

"We have an army behind us," says Marie-Eve. "And it means a lot. It's very touching."