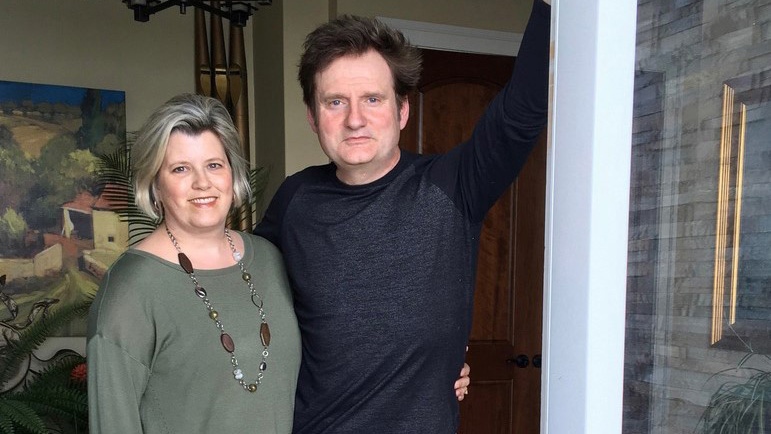 Lara Ryan and her husband Brett are shown at their home in Ferguson's Cove, N.S. on Saturday, May 25, 2019 in a handout photo provided by Ryan. (THE CANADIAN PRESS/HO-Lara Ryan)

HALIFAX -- A Nova Scotia woman has come forward to warn people about an unusually cruel scam that involves the promise of free, purebred puppies.

Lara Ryan says she didn't realize what was happening two years ago when strangers first started showing up at her home, telling her they were responding to an online ad from a man hoping to give away a puppy he could no longer care for.

At first, Ryan and her husband Brett assumed there had been a few honest mistakes, but then a pattern emerged.

"It's random enough that we kind of forget about it," Ryan said in an interview Monday "Then a stranger comes to the door and we're like: 'Hello. Oh, right. Puppies. Sorry."

In all, about a dozen people from as far away as Toronto and St. John's, N.L., have knocked on their door with similar stories, all saying they decided to pick up the dog rather than wire the roughly $500 the man requested to cover shipping costs.

Typically, the suspect tells those responding to the ad that he has to give up the small, impossibly cute dog because his ill child or other relative is in the hospital. Sometimes, he says he has to move outside the province and he can't take the puppy with him.

"The person who wants the puppy thinks: 'This is just awesome because it's a purebred for free, and we're helping,' " says Ryan.

Different breeds have been offered -- corgis, Jack Russell terriers, chihuahuas -- but the man's phone numbers and email addresses are never the same.

Police have said there's little they can do. The scammer's emails are from proxy accounts that could be based just about anywhere, and his calls appear to be coming from voice-over-internet-protocol phones, which can't be traced.

It's clear the con man's goal is to get the shipping money, but when that doesn't happen, the ruse continues until the unsuspecting dog lover shows up at Ryan's home in Fergusons Cove, just outside of Halifax.

"Some of them have been talking to him 10 minutes before they're at our door," she says. "We kind of take a deep breath and say, 'I'm sorry to tell you this, but it's a scam.' "

The first victim that Ryan can recall had driven from St. John's, N.L. -- a 1,500-kilometre trip that included an expensive ferry ride.

"We had an older couple last summer who drove from Toronto," she says. "The poor gentleman could barely walk up our step. And they were so excited to get this little ... dog."

The most recent encounter came Thursday, when a pair of men arrived from Montreal.

"They had been talking to this guy for three months," Ryan says. "So they've built up a rapport, and they feel like they know this guy."

Ryan says she can't understand why the man continues to use her address, or why he torments his victims after his crime has been foiled.

"He knows he's not going to get any money from them, because as soon as they call him again from our doorstep, he vaporizes," she said.