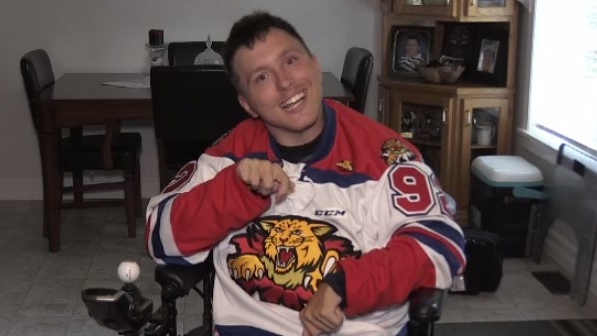 Brent Daborn is a die-hard Moncton Wildcats fan and dreams of standing for the national anthem with his favourite team. However, he lives with cerebral palsy and is confined to a wheelchair. That's why his friends and family are raising money to purchase a stand-up wheelchair that will allow him to fulfill his wish.

“The Wildcats took him under their wing pretty much from day one,” says Kim Daborn, Brent’s mother. “He started attending the Wildcats games in 2006.”

The 23-year-old Moncton man prepares his own pre-game notes, is active on Wildcats social media, and never misses a game.

“The boys treat him like one of the players,” says family friend Nicole Sellick-Morrison.

The one thing he hasn't been able to do with the team is stand for the national anthem. Brent has been confined to a wheelchair his entire life, as a result of living with cerebral palsy.

“It would mean more than anything to me to stand up, just like my teammates,” says Brent.

In order to fulfill that wish Brent would require a standing wheelchair, which costs around $50,000. Brent has already tested a chair and it allowed him to get himself a glass of water for the first time.

Brent’s community is stepping up to help him. A fundraiser has already brought in $9,000 and a GoFundMe page was created to help cover the cost of the chair and a new accessible van to accommodate it.

A communications officer from Social Development said the department has never purchased a stand-up wheelchair for a client, as there are more affordable alternatives. However, Brent’s mother says those alternatives do allow her son to stand, but are not transportable.

Strangers from across the country have reached out to help cover the costs of the mobile stand-up wheelchair on Brent's wish list.

“To see Brent actually standing up for the first time for the national anthem at his team Wildcats would be beyond excitement,” says Nicole.

Brent says he’s hopeful he’ll be able to get a new chair and is looking forward to being a part of the simple things in life.