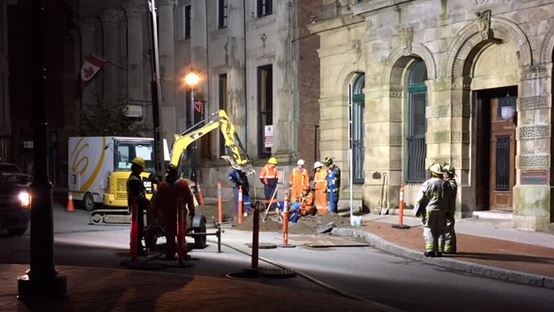 Workers from Enbridge Gas and repair a gas leak near the corner of Prince William Street and Princess Street in uptown Saint John. (CITY OF SAINT JOHN/TWITTER)

The Saint John Fire Department, along with police and Enbridge Gas, had to deal with a natural gas leak around supper time on Friday.

Police say the leak was at the intersection of Prince William Street and Princess Street.

Power was shut off completely for a one-block radius of that intersection. Businesses, bars and restaurants in that area are without power.

Police asked people to stay clear of the area until the leak could be repaired.

Several streets and roads around the leak area were completely closed until about 9 p.m. There were also be power outages in the uptown core until repairs have been made.

Police said firefighters and gas company workers let people back into the evacuated neighbourhoods after taking gas readings to make sure it was safe.

Power has been restored to the area of the natural gas leak. Zero gas readings in all adjacent buildings. The following streets will remain blocked off: Prince William St from Duke St to King St and Princess St from Canterbury St to Water St.