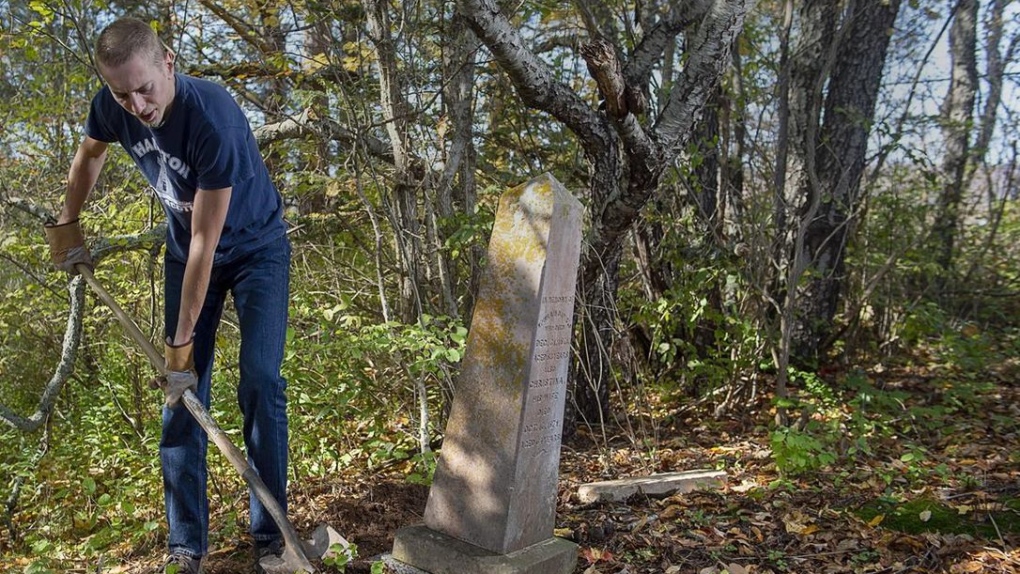 Steve Skafte, a photographer and writer based in Nova Scotia's Annapolis Valley, works to stabilize a grave marker in a small, long-abandoned cemetery in West Paradise, N.S. on Thursday, Oct. 21, 2021. Skafte established Abandoned Cemeteries of Nova Scotia, a Facebook group devoted to cataloguing burial sites that have been neglected or forgotten with the passage of time. ANDREW VAUGHAN / THE CANADIAN PRESS
HALIFAX -

The only mark of "Baby's" time on Earth is a tombstone with a rabbit engraving, slowly being swallowed by the wilds of Nova Scotia over more than a century.

Even that may have been lost had Steve Skafte not scoured the unruly fields of Plympton, Digby County, to find the Hardscratch burial ground guarded behind a rusty gate.

He cut through the thicket of pine trees, swept aside the blanket of deadfall and brushed off the moss shrouding the rickety cairn.

After clearing the area for future visitors, Skafte posted photos and GPS co-ordinates of the graves to Abandoned Cemeteries of Nova Scotia, a Facebook group devoted to chronicling orphaned burial grounds.

The gone and forgotten die twice, said Skafte -- once in life, then again in memory. In that sense, he said, the project's mission is to resurrect these crumbling monuments to Nova Scotia's history.

"It's like a first step to make sure it doesn't disappear," said Skafte, a writer and photographer based in Bridgetown. "We'll make sure that if somebody comes along years later, and they're all in worse state than I even found them, they'll never be lost again."

In the past year, Abandoned Cemeteries of Nova Scotia has charted nearly 100 burial sites scattered across the province, from the far reaches of Cape Breton to Skafte's stomping grounds in Annapolis Valley, which has so many plots he refers to it as "the dead centre."

A cemetery is considered "abandoned" if it doesn't receive regular maintenance, but the overgrowth on many sites is so impenetrable that Skafte presumes they haven't been touched in decades.

The graveyards tend to be tucked away in tangled woods, on precarious hilltops or along the edges of untended fields, he said. Some tombstones date back to the 18th century, and many have shattered or sunk into the soil as the coffins beneath them rotted and collapsed.

Mass rural-to-urban migration has depopulated much of Nova Scotia's countryside, reducing some communities to ghost towns and leaving the departed without nearby descendants to maintain their final resting places.

But as genealogy has emerged as a popular online pastime, many of Abandoned Cemeteries of Nova Scotia's roughly 6,300 members are looking to reclaim these ancestral ties.

Ashley Conrad of Cole Harbour joined the group in hopes of learning more about her family history, and was surprised to discover that some of her forebears were buried in a wooded plot she'd driven past hundreds of times.

"It was just kind of nice to find a sense of belonging," she said. "If I were dead for like 300 years, I'd love for somebody to come and visit me and to be remembered."

For Skafte, whose familial roots lie in Ontario, the allure of abandoned cemeteries is less about self-discovery but rather uncovering the memories of generations past.

Sometimes he'll be able to glean a few details about the dead through obituaries or folklore. But more often that not, all he knows about the people who are buried are the fading names and dates inscribed on the markers.

But Skafte said every time he unearths a tombstone, he feels a sense of connection that seems to collapse time.

"All the brush you find, it's in the way of the history," said Skafte. "As soon as you peel that back, it feels like you're almost right when it happened."

In some ways, Skafte's Facebook group is a crowdsourced extension of the research Marble started about 50 years ago when he set out to survey cemeteries in Annapolis Valley and Colchester County.

Dates of death shed light on the severity of epidemics centuries ago. Graves marked by numbers instead of names exemplified the mistreatment of the poor. Prejudices determined where the dead were buried, segregating cemeteries by race and religion.

"Gravestone inscriptions are sort of like an outdoor library on people's lives," said Marble. "Abandoned cemeteries may become totally lost, and that information becomes lost."

This report by The Canadian Press was first published Oct. 24, 2021.