'Good must continue to come from this:' Memorial service held for Broncos victims 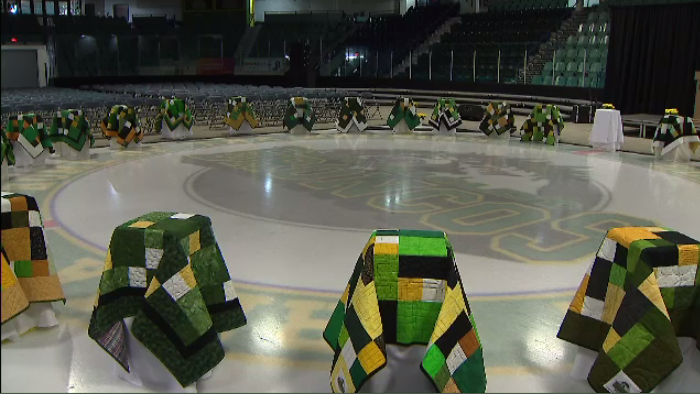 Sixteen people were killed and 13 were injured after the Saskatchewan hockey team's bus collided with a semi driven by a novice trucker who had blown the stop sign at a rural intersection.

HUMBOLDT, Sask. -- After prayers and songs filled the Saskatchewan hockey arena, Carol Brons spoke to the crowd as a grieving mother.

Her daughter was one of 16 people who died after the Humboldt Broncos junior hockey bus collided with a semi truck at a rural intersection. Thirteen others were injured.

Brons spoke Saturday at a memorial marking the one-year anniversary of the collision and described the day as a milestone.

"Not a joyful milestone but one of perseverance, faith and courage," she said, standing beside Celeste Leray-Leicht, whose son was also killed.

"We are not preachers. We are moms," Brons said. "And like many moms before us, we have lost a child."

The crash brought the nation and the world together in grief, Brons added, and got people talking about the importance of mental health and changes in transportation.

"Good must continue to come from this."

The Broncos were on their way to a playoff game when a semi driven by a novice trucker barreled through a stop sign and into the path of the team's bus.

The three prairie provinces have since made training mandatory for commercial truck drivers and an entry-level national training standard is to be in place next year. The federal government is also to make seatbelts mandatory on new medium and large highway buses in 2020.

The memorial service at the Humboldt rink started off with a moment of silence at 4:50 p.m., the exact time of the collision. Rows of yellow banners were suspended above the main entrance with the names of all 29 people who were on the bus that day.

Jacob Leicht was a 19-year-old hometown boy and a forward on the team.

Prime Minister Justin Trudeau spoke in a video message at the service and said people cannot forget pictures of the horrific wreckage of the crash.

"But what will stay in our hearts forever are images of compassion and strength: players clasping hands, united, in the hospital ward; young men learning to stand, walk and take to the ice again; hockey sticks leaned up against thousands of Canadian front doors," Trudeau said.

Many people also stopped Saturday at the crossing of Highways 35 and 335 near Tisdale, Sask., where the crash occurred.

Karen Rafael, a first responder who arrived on scene shortly after the collision, knelt down to wipe dust and falling snow off the photos and other mementoes placed among the wooden crosses.

"These boys have had their year and they are in heaven or skating with Jesus, I guess," she said after visiting the memorial.

Jeremy Collyer of Brandon, Man., arrived with a group of hockey parents before going to watch their children play a championship game in Tisdale. It was important they visit the site, he said.

"We all have kids in hockey," he said. "You always hear you're one big family. And it's true."

Kaleb Dahlgren of Saskatoon, who was injured in the crash, didn't attend the Humboldt service but wrote a letter to his dead teammates that was read out loud.

He asked them whether they were in heaven celebrating the end-of-season party they didn't get to have or playing pond hockey.

"It's been a year since I last saw your beautiful faces and they still cross my mind daily," Dahlgren wrote.

"It's the worst knowing there's no way to bring you back."

Brons and Leray-Leicht then asked those in the arena to stand up if they were first responders at the crash site or hospital staff who aided the injured or people who made food or prayed or shared hope in the weeks after the crash.

By the end of their speech, nearly everyone was on their feet, many with tears.

"We wish we could hug each one of you," Brons said. "Thank you for your love."