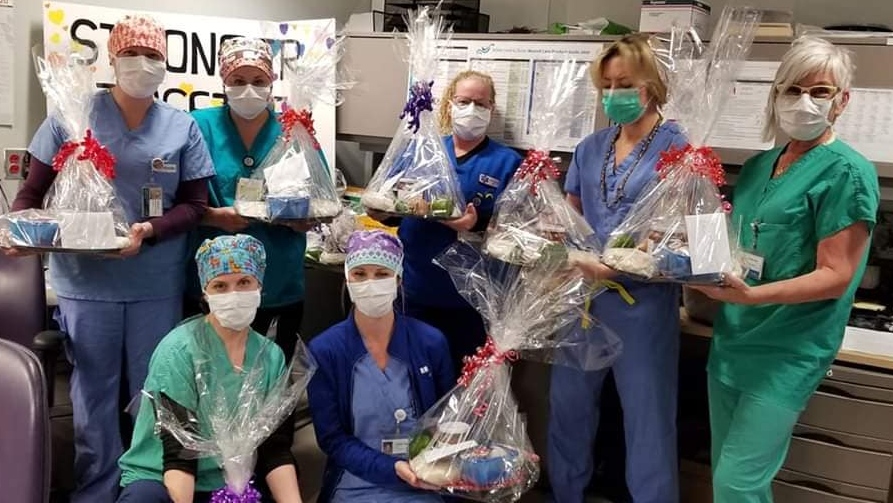 HALIFAX -- A Nova Scotia business is honouring the everyday heroes in their community.

Maria Simpson and her husband are the owners of The Vegetorium Country Farm Market in Fall River, N.S.

The market, which opened in 2006, adapted their business model in March in response to the COVID-19 pandemic.

“It went from seeing everyone in the store to everyone messaging and calling wanting delivery instead. So we started to go around everywhere doing that,” says Simpson.

“To be honest, it was a little bit overwhelming.”

Simpson says every night, as part of her children’s bedtime routine, family members say three things they are grateful for. When the pandemic hit, they began to talk about the people they were thankful for, like local heroes who were helping others or working to keep Nova Scotians safe.

Simpson’s son Isaiah suggested it would be nice to show people their work is appreciated, which led to the creation of the Grateful Hearts Delivery Campaign.

Simpson created a list of people her family wanted to thank and, each day, as they delivered goods to their customers, they would take a moment to stop and thank a local hero with a gift from the heart.

“It calmed our stress down. It gave us something to look forward to,” says Simpson.

Soon they began taking nominations from people in their community, which led to gifts for people like police officers, group home workers, bus drivers, 911 dispatchers, and small business owners like Louise MacDonald.

When the COVID-19 pandemic hit, MacDonald was forced to close her studio.

“On March 13, we had a sold-out March break broadway camp ready to go on March 15. We had to shut it down hours before opening,” recalls MacDonald.

“We took March break to pivot ourselves. We trained our staff, we researched, we did trials, and before March break was over we were set to go.”

Joyful Sounds Studios was able to continue to offer their classes and lessons online. MacDonald says she felt it was important to do what she could to give her students a sense of normalcy during a time when nothing was normal.

“It was all taken away in a heartbeat. We were determined to keep giving that to our families week after week. We heard from parents that we were the only normal thing for their children at that time,” says MacDonald.

“It’s been exhausting and hard work for sure, but it’s been very rewarding and the community has been exceptionally supportive.”

One of MacDonald’s employees reached out to Simpson to nominate her for the Grateful Hearts Delivery Campaign.

“She said Louise was concerned about her staff and students. She worked hard to adapt so teachers still had work and students still had classes. She said that she really put in a big effort and they really appreciated it,” says Simpson.

“They are very generous people and we are so lucky to have them here in Fall River. It blew my mind that she was taking the time to do that, because she was already delivering fresh veggie boxes every day,” says MacDonald.

“They are really the heroes of the community for recognizing others and putting themselves last.”

In just over two months, Simpson and her family have honoured over 100 different local heroes.

“We wanted to thank them. All of those people aren’t doing it for praise, they would probably just say they are just doing their job, but they all deserve a thank you. It’s nice to know that people see what they are doing and people appreciate them,” says Simpson.

“It makes you feel pretty awesome to be able to meet these people, it’s inspiring. The best part of this is to see their reaction. When they feel appreciated their faces light up, so it makes you feel warm when you are driving away,” says Simpson.