Group of N.B. tubers found safe after overnight search in the woods

Group of N.B. tubers found safe after overnight search in the woods 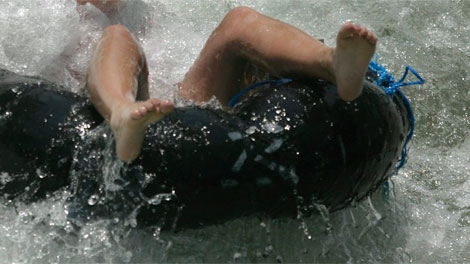 A man goes water tubing in this undated file photo.

New Brunswick RCMP says a group of tubers were found safe earlier this week after they became lost in the woods.

Police received a call that a group of five people between the ages of 33 and 60 had not returned from tubing in the Jacquet River, in Belledune, N.B., around 11:30 p.m. Monday.

Police say the group began tubing down the river around 1 p.m. that day. A few hours later, they came to a long section where the water was too low to keep floating downstream. The tubers decided to get out of the water and walk downstream.

A family member reported them missing after the tubers did not return when they were expected.

Police say they were able to talk to the group on the phone and learned they had become disoriented and lost in the woods and couldn’t pinpoint their location.

Police and volunteer firefighters went to the area and organized a search, which went on through the night.

The group was able to start a small fire near the riverbank and stayed there while they waited for help, which arrived around 7:30 a.m.

Police say the tubers were uninjured and in good spirits, although they were tired and cold.

All five people were looked at by paramedics. No one had to go to the hospital and they all went home.

"The banks of Jacquet River are at times treacherous, especially in the dark, so this search was no easy operation," said Sgt. Roch Lizotte, with the Chaleur Region RCMP, in a news release. "I want to commend the Belledune volunteer firefighters, who were in the woods with us all through the night. Their help was instrumental in locating the group safe and sound."