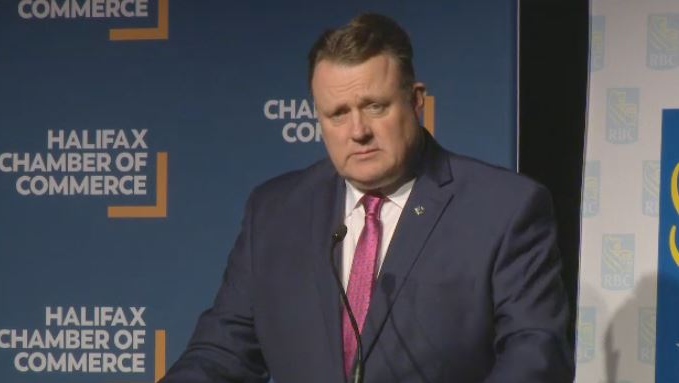 Halifax Mayor Mike Savage delivers his annual state of the municipality speech before the Halifax Chamber of Commerce on Nov. 22, 2018.

Halifax Mayor Mike Savage says cities with an intent to grow need to shed timidity and understand that the biggest cause of failure is often risk aversion.

In his annual state-of-the-municipality speech Thursday, Savage told the Halifax Chamber of Commerce that "more can be lost by avoiding opportunity than by falling short of ambitious goals."

To illustrate his point, the mayor touted the growth of the city's downtown core, highlighting showcase developments such as the Halifax Central Library, the city's new convention centre, and Maple, an award-winning apartment highrise.

Savage showed photos that provided a dramatic contrast of Halifax's current skyline to that of 2012, when he was first elected: "That's a different city," he said to applause.

Savage also pointed to the ambitious goals of the Halifax Economic Growth Plan, which seeks to grow the population to 550,000 and the GDP by $30 billion by 2031.

"I'm pleased we continue to make progress toward that goal with record population increases for Halifax," he said.

According to Statistics Canada figures, the city's population grew by about 15,000 people over the past two years, Savage said. But he said a look inside those numbers reveals his favourite statistic.

"Greater than half of our net population growth is in the 25 to 39-year-old category, the prime age for establishing businesses, careers and families."

In fact, according to a report scoring technology talent from real estate services and investment firm CBRE Canada, Halifax now ranks seventh nationally, with 28.1 per cent growth in its tech talent pool over the past five years, while adding 2,500 tech sector jobs.

The report says tech represented 5.7 per cent of the city's total workforce in 2017, a figure better than Edmonton, Calgary, Winnipeg and Hamilton.

But Savage also cautioned that some budget challenges lie ahead as the city grapples with the impacts of arbitrated collective agreements, the ongoing consequences of the residential assessment tax, and the tax implications of new commercial construction not yet at full occupancy.

"These are real issues and they will necessitate hard decisions at the council table," he said. "As well, talk about new approaches on commercial tax continue with an expectation that recommendation for council's consideration will come forward in the new year."

He said the city was continuing to peg down a debt that now sits at $240 million, as opposed to $350 million at the time of Halifax's amalgamation with neighbouring municipalities in 1996.

Savage also said the city has to do more work to alleviate poverty -- "How can it be that 60,000 people in the Halifax region struggle to get by on incomes that can't begin to cover basic needs?"

One potentially contentious issue that Savage avoided in his speech was the push for a new stadium from the business group hoping to land a CFL franchise.

Savage was later asked by reporters about the omission in a speech that cautioned against risk aversion.

He said he left the issue out because the city doesn't know yet what kind of opportunity exists.

"It could be an opportunity but we don't know because we haven't seen the numbers," said Savage.

"What is good about it is that for the first time ever a private sector led organization is prepared to put some of their own money into building a stadium for us ... but we have to decide whether it's the right thing or not."