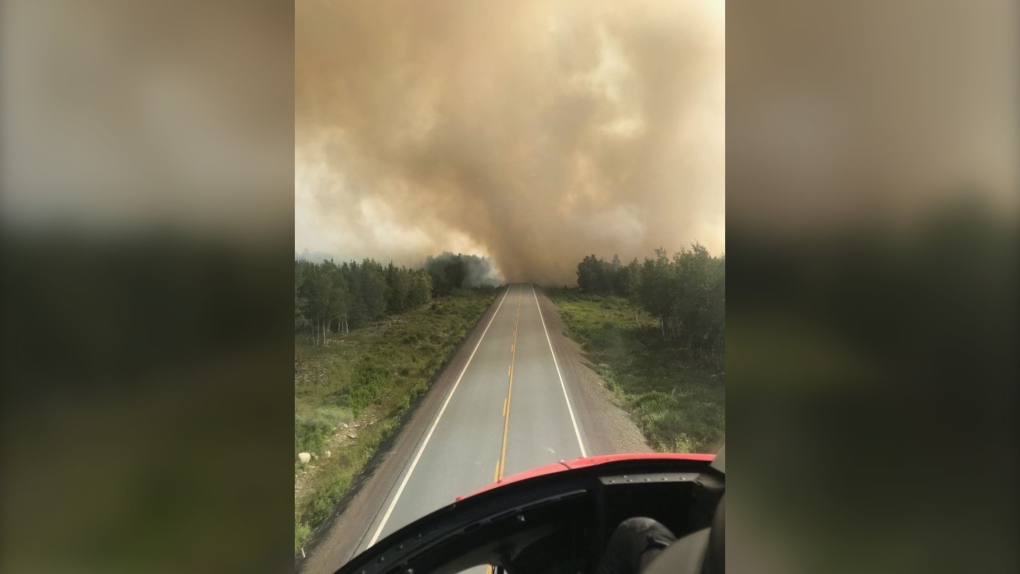 A growing forest fire in central Newfoundland has forced the continued closure of a highway linking several small communities on the island's south coast.

Forestry Department officials had planned to reopen the Bay d'Espoir Highway on Friday, but the fire south of Bishop's Falls, N.L., grew on Thursday and jumped across the two-lane road, also known as Route 360. The fire started almost two weeks ago and had prompted previous closures. Photos from the area show a wide swath of thick, grey smoke billowing into the air.

"The fire behaviour was intense yesterday," said Jeff Motty, the Forestry Department's provincial duty officer. "It didn't settle down overnight as we wished. It wasn't safe for travel (Friday)."

By Thursday, the fire had grown to cover almost 15 square kilometres as hot, windy weather made it difficult for firefighters to control the flames. It wasn't threatening any communities, but the owners of seasonal cabins in the area have been asked to leave for their own safety.

Motty said there are two other fires burning in the province's central zone and there is no rain in the forecast. "We've had fire growth in all three of those fires over yesterday -- a really hot, dry day with a bit of wind," he said.

In all, the province is using five water bombers -- two from Quebec -- and four helicopters to fight the fires.

The Bay d'Espoir Highway is the only road connecting the communities of Harbour Breton, Hermitage and Conne River to the Trans-Canada Highway, the main provincial highway across Newfoundland. The 200-kilometre rural road runs north to south through a sparsely populated area that includes many other tiny communities.

The region's health authority has plans in place to deal with any medical emergencies. "If they need one of our helicopters for an emergency, we would certainly accommodate that," Motty said. "Our No. 1 operational objective is to open that highway again."

On a Facebook page that tracks driving conditions on the highway, residents on both sides of the blocked route were offering help to those stranded by the fires.

"If anyone on the TCH side is stuck and needs a shower or fresh meal, send me a (message)," said one post. "I'm in (Grand Falls-Windsor) and happy to help if I can."

Meanwhile, residents in some of the smaller communities south of the fire said they were worried about food and supplies running out and the lack of access to medical care.

"There are also people on the wrong side of the fire waiting for dialysis and chemo and surgeries and other medical issues," said one Facebook post.

"We do not have a doctor nor an emergency room to go if one should be needed in the event of heart attack, stroke or accident or any emergency .... One helicopter cannot accommodate the need for medical emergencies throughout all the Coast of Bays (federal riding). There are also transport trucks stuck here."

"I have been speaking with my federal colleagues to let them know we may need further support, and am assured they will be there as needed," he said. "Stay safe."

This report by The Canadian Press was first published Aug. 5, 2022..

2/3: Safety is paramount. Residents, cabin & camper owners are asked to leave their cabins and avoid the affected areas, including forest access roads. Resources have begun arriving from Quebec and are anticipated to begin support efforts tomorrow. pic.twitter.com/y7Q3DPsWvU

Ontario Premier Doug Ford says through his throne speech that more can be done to ease health system pressures, but is not yet offering up any new solutions.