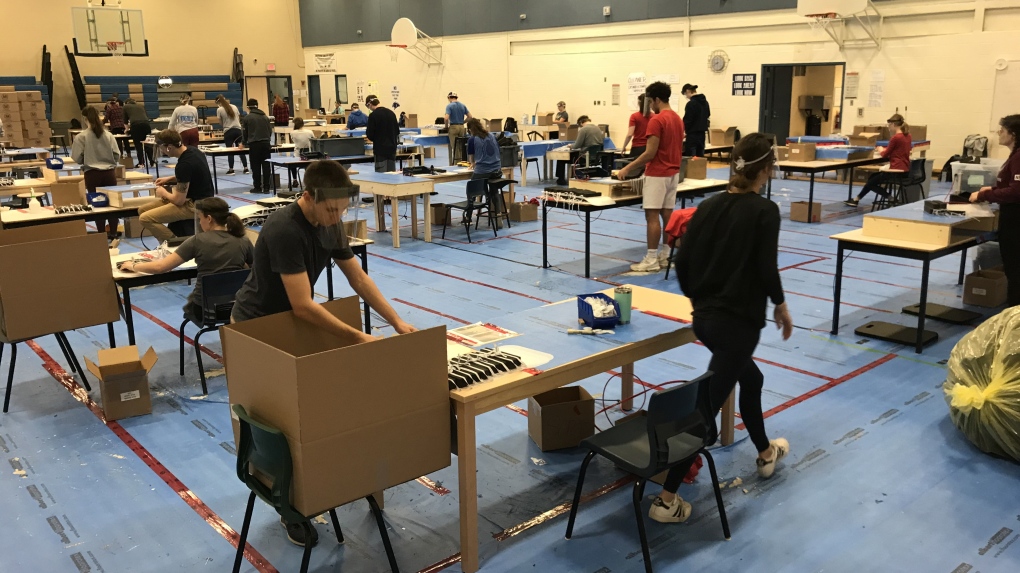 MacKenzie Atlantic workers on company's production line at Prince Andrew High School in Dartmouth, N.S. are shown in this recent handout image. A small Nova Scotia company that retooled to make medical face shields for the province's health system says it is producing above its manufacturing target more than a month into the fledgling venture. (THE CANADIAN PRESS/HO-MacKenzie Atlantic)

HALIFAX -- A small Nova Scotia company that retooled to make medical face shields for the province's health-care system says it is exceeding its own manufacturing target more than a month into the fledgling venture.

MacKenzie Atlantic, located in Musquodoboit Harbour, signed an agreement in mid-April to provide shields for the Nova Scotia Health Authority and the IWK Health Centre in order to help boost supply during the COVID-19 outbreak.

MacKenzie, a machine shop that typically manufactures items for the defence sector, was tapped to produce one million face shields for the health authority and 100,000 for the IWK. The company aimed to eventually increase production to 70,000 shields per week.

"We are producing about 90,000 face shields a week right now," owner Matthew MacKenzie said in a recent interview.

MacKenzie said the increased output has allowed the company to divert some of its product to long-term care homes such as the Northwood facility in Halifax, which has been the epicentre of the province's fight against the novel coronavirus.

The company has added 44 new employees to its original 26 in order to staff its production line, which has been set up in the unlikeliest of places -- a high school gymnasium.

MacKenzie, a former student at Dartmouth's Prince Andrew High School, was aware that the school had two gymnasiums when he was looking for the space he didn't have at his current production facility.

"We've really been able to come up with a streamlined manufacturing plant," he said, adding the idea was also about providing a lower price point for the province, which agreed to the location.

MacKenzie said his firm was able to convert to making shields so quickly because of experience gained over the last 15 years working with other defence companies in the region -- learning what works and what doesn't in setting up an assembly line.

He said that kind of co-operation has extended to the manufacturing of the shields -- his company works with a foam manufacturer near Digby, N.S., and has its shields cut by another firm in Windsor, N.S.

MacKenzie Atlantic is one of several companies, large and small in the region, that have partially converted to make medical supplies and personal protective equipment (PPE)

Dr. Alex Mitchell, a senior medical director with the Nova Scotia Health Authority, said the contributions of local firms has been vital to the health system during COVID-19.

Mitchell, who is also the co-chair of the committee responsible for overseeing the PPE supply chain in the province, said the local vendors are "delivering what they committed to deliver."

"What these local solutions have done is given us good, stable local supply options that absolutely stabilize our supply and demand picture," he said, noting the local companies don't completely replace the need for imports.

Mitchell said it's his opinion that the current supply rate will have to be maintained into the foreseeable future and it only makes sense to get a set amount of what's needed from local manufacturers.

He said a dependence on a global supply chain originating in a few select locations has presented "big-time" challenges.

It's something he said was evident in recent years, even before the virus hit, pointing to a pharmaceutical shortage resulting from hurricane damage in Puerto Rico, and an earthquake that affected a number of medical device makers in Mexico.

"Having a local supply for some of these things has real value, and it does give you some backstop when the global supply chain becomes unstable," Mitchell said. "I think well into the future ... there will be value in some level of local production for the things that make sense for us to make and source here."

MacKenzie Atlantic's contract with the health authority is due to finish up in mid-August and the owner said they are looking at a future facility to produce face shields for commercial applications that are based on the company's proprietary design, which is currently awaiting a patent.

Matthew MacKenzie said that until a vaccine for COVID-19 is mass-produced, protective equipment will be needed across industries and in such places as grocery stores and commercial flights.

Like Mitchell, he said there needs to be a ready supply of local equipment for the health system to reduce dependence on overseas markets and to avoid potential price-gouging.