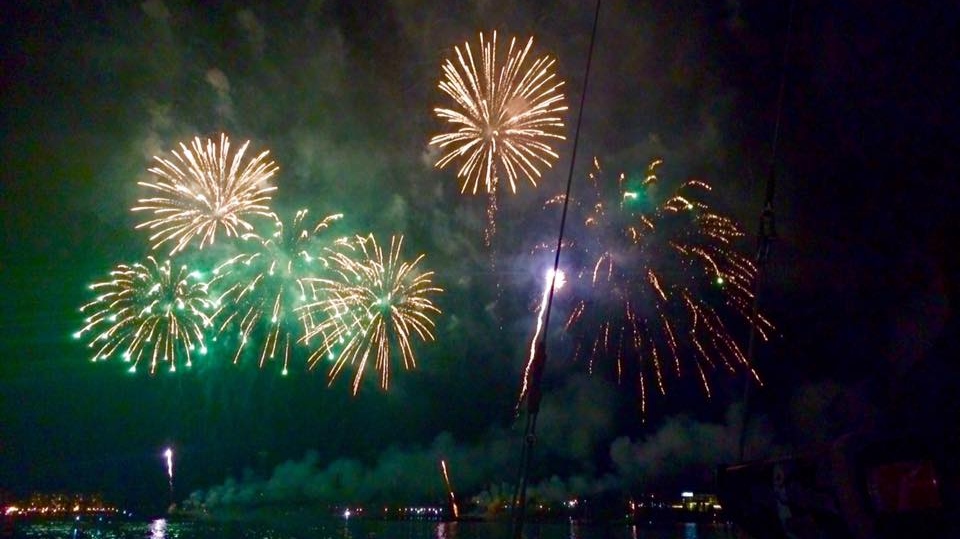 Fireworks are seen over Halifax Harbour during the Tall Ships Festival in July 2017. (Andrea Jerrett/CTV Atlantic)

HALIFAX -- A Nova Scotia city councillor is pushing for quiet fireworks in Halifax out of concern the noise is alarming veterans and people on the autism spectrum.

However, some in the pyrotechnics industry say the idea is likely to fizzle when the City of Halifax views the high costs, while a veteran with PTSD notes not all people with wartime traumas react badly to the shows.

An amended version of a motion proposed by Coun. David Hendsbee was sent to council staff on Tuesday night, following a 13-2 vote in favour of further study.

It requests examination of the cost and "possible benefits associated with using silent pyrotechnics over traditional fireworks," along with information on the health impacts of the popular displays.

A few other Canadian jurisdictions, including Banff, Alta., have abandoned fireworks displays, though in Banff's case it was due to concerns over frightening wildlife.

Ray Brazeau, a licensed pyrotechnician and president of StarLite Pyrotechnics Ltd., said the alternative to pyrotechnics is as much as four times more expensive, would occur close to the ground and would still make some loud noise.

"If you want something quiet, nothing is going to go higher than 12 feet," he said.

Hendsbee, the councillor for Preston-Chezzetcook-Eastern Shore who brought the motion forward, said he's been hearing from veterans in the region that the noise can trigger their PTSD.

"I heard veterans who've had to go hide in the basement and put on noise-deafening headphones because it brings back terrible memories of their war experiences," the veteran municipal politician said.

He is looking for information on a "quieter, more gentle fireworks display," with smaller amounts of explosives and less noise.

The largest and most spectacular fireworks displays in the city tend to happen over the city's harbour.

However, the councillor said it may be wiser to have smaller events with less height and less accompanying noise.

He also said that unannounced neighbourhood fireworks are particularly difficult for veterans, as they're less able to adjust their schedules to avoid them.

"I'm in favour of looking at it. I think it would be a humane thing to do."

However, Brazeau said in a telephone interview from his Toronto office that "quiet fireworks" is a misconception.

He said pyrotechnics -- most often used for rock concerts and sports events -- still can create whistles, screams and banging noises.

The special effects go off at ground level or slightly above the ground, and "tend to be quieter that way," he said. "However, you're still going to get a bang in order to propel it into the air."

He argues that the key is to give the public ample notice of a coming fireworks display in order to allow people to take measures to avoid the noise.

Tyson Bowen, a former Canadian soldier who is setting up a farm in Nova Scotia where recovering veterans can heal their PTSD, said veterans don't universally react badly to fireworks.

Quiet can trigger memories of the silence that comes before a military attack, he said.

Some veterans still enjoy recreational shooting, while others are affected by the bang of a car door, he said.

"Still, it's nice to see it being talked about," he said, "and that it's being understood that there are veterans that deal with this .... especially when the fireworks are not known in advance."

He said in his own case, fireworks can be a trigger to remind him of Afghan experiences, but he has coping mechanisms he's developed for those occasions.

This report by The Canadian Press was first published Feb. 26, 2020.