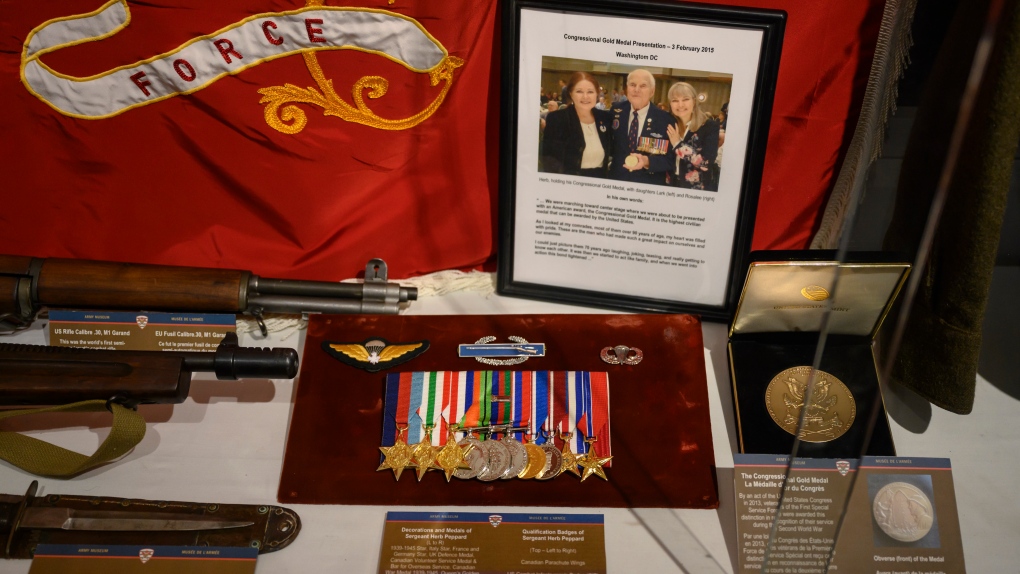 Memorabilia including the uniform and medals of the late Second World War Sergeant Herb Peppard is seen during the unveiling of a new First Special Service Force exhibit featuring Sergeant Peppard at the Army Museum Halifax Citadel in Halifax on Friday, November 8, 2019. (THE CANADIAN PRESS/Darren Calabrese)

HALIFAX -- A Nova Scotia member of the famed Canada-U.S. Second World War army unit known as the Black Devils has been honoured with a new museum exhibit in Halifax.

Peppard was one of the last survivors of the First Special Service Force, which fought in several campaigns between 1942 and 1944 in Italy and northwestern Europe. This year marks the 75th anniversary of the unit's disbandment.

"He was a very tough and courageous soldier, and in later life a loving husband and father," said Ken Hynes, curator of The Army Museum Halifax Citadel, at a ceremony unveiling the new exhibit on Friday.

"His exploits during the war are the stuff of legend."

The exhibit features artifacts of Peppard's service, including medals, uniforms and personal stories. Peppard, who was a sergeant, was awarded both the U.S. Silver Star and Bronze Star Medals for gallantry in the field.

His daughter, Rosalee Peppard Lockyer, said she was overwhelmed by the collection that honours her father as a soldier and as a man.

The First Special Service Force was officially activated on July 20, 1942, under the command of Lt.-Col. Robert T. Frederick.

The shoulder patch insignia for the unit was a red spearhead, with "USA" written horizontally and "CANADA" written vertically.

Preference for entry into the 1,800-strong force was given to men who had previously been employed as lumberjacks, forest rangers, hunters, game wardens or in similar, labour-intensive jobs.

Peppard, who was born in Truro on July 7, 1920, joined the military at the age of 20 after working five years in the town's lumber mill.

In a videotaped interview several years ago with the Government of Canada's Memory Project, Peppard recalled that he initially joined the artillery where he trained with an anti-aircraft unit.

"My reasoning was I'd be way back from the front lines and I'd be safer there," he said with an ironic chuckle.

He said he later volunteered for the First Canadian Parachute Battalion and was in jump training at Fort Benning, Georgia, when the call came for volunteers for a new unit -- the First Special Service Force.

"They asked for volunteers and they got 97 volunteers to leave that outfit to go to the new outfit and I was among them," Peppard said.

The elite commando unit's most famous feat was its scaling of the 3,000 foot high Monte La Difensa in Italy. The daring vertical assault was depicted in the 1968 movie "The Devil's Brigade" starring William Holden, Cliff Robertson and Vince Edwards.

"The mountains of Italy seemed to be a disaster to me," said Peppard, whose unit was forced to pull back in its first attempt.

"It was raining and it was cold and it was damn scary because we were going up this narrow path and winding our way up the mountain and we came under artillery fire and mortar fire," he said.

"We lost a third of our regiment that night."

Rosalee said her father was proud to point out that the movie didn't get the ultimately successful assault quite right.

"They do this Hollywood version with perfect lighting," she said. "I asked Dad about that and he said, 'Yeah, but we did it in the pitch black."'

The unit went on to cement its reputation during nighttime reconnaissance raids on the Germans near the Italian coastal city of Anzio, south of Rome, in 1944. Wearing camouflage and with their faces blackened by boot polish, the unit sowed confusion and terror along the enemy lines.

It was during those raids that the force earned the "Black Devils" moniker, coined by their German adversaries.

In 2015, 42 surviving members of the unit, including Peppard, were honoured with the Congressional Gold Medal -- the highest civilian honour the United States Congress can bestow.

Nova Scotia's Lt.-Gov. Arthur LeBlanc noted that Peppard became a teacher after the war and was also a bodybuilder, a poet, a singer, and an author who wrote about his wartime experiences. He also wrote newspaper columns and was a volunteer for numerous causes.

"When reviewing the description of his life, the words that come to mind describing him would be 'Renaissance Man,"' LeBlanc said.

This report by The Canadian Press was first published Nov. 8, 2019.