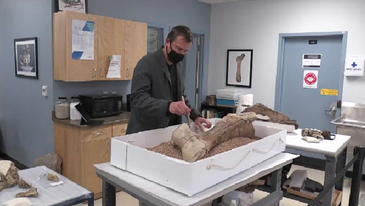 Even though they were unearthed three decades ago, so far, only researchers have seen mastodon bones found here in the Maritimes.
HALIFAX -

Even though they were unearthed three decades ago, so far, only researchers have seen mastodon bones found here in the Maritimes.

That's about to change in February when they go on public display for the first time at the Museum of Natural History in Halifax.

"There's quite a bit of work that has to go on sort of behind the scenes to get specimen's ready for exhibit,” said Tim Fedak, curator of geology at the museum.

A new exhibit, called Age of the Mastodon, will be coming to the museum early next year. For the first time, 80,000 year old mastodon bones found in Nova Scotia will be on display.

"80,000 years ago, this animal was walking through the Nova Scotia landscape and it fell into a sinkhole,” said Fedak.

The bones were discovered three decades ago in the Milford Gypsum Quarry. Since then, they have been safely stored away at the museum, available only to researchers.

"We're really excited about sharing it because we've had these specimens and fossils in the collection for more than 30 years and it's a chance to finally bring them out and share them with the public,” said Jeff Gray, curator of visitor experiences and exhibits at the museum.

Before the exhibits opens, a lot of work needs to be done to piece together the bones and fill in missing areas with plaster.

The upcoming mastodon exhibit isn’t the only exciting thing on the horizon at the museum; plans are already in the works to celebrate the 100th birthday of Gus, the gopher tortoise, next year. Some of the gallery spaces are also being renewed.

"Beginning last month we started taking out one of our main permanent collection spaces. It's a space that many visitors know that had many of our mammals and birds area, that space is being completely transformed and a new exhibit will be open in 2023,” said Gray.

As for the mastodon exhibit, that’s set to open in February.

"The mastodon exhibit is not just an exhibit that we're building to be here at the museum. While it will be here for all of 2022, it will travel around the province from 2023 to 2026 before returning back to the museum,” said Gray.