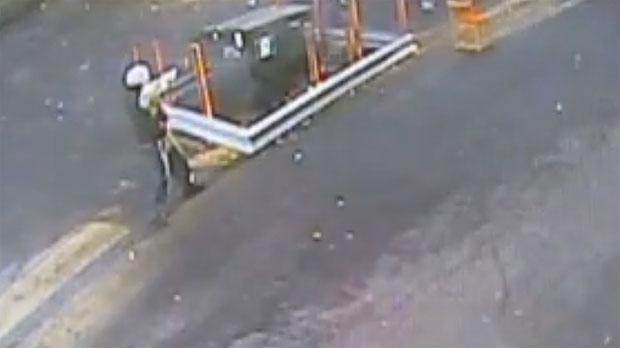 This image was taken from surveillance video of a brazen daytime shooting on Brunswick Street in Halifax on Nov. 13.

Police have released two surveillance videos in relation to a brazen daytime shooting in Halifax.

Officers responded to a report of shots fired in the 2100 block of Brunswick Street just before 3 p.m. on Nov. 13.

Police say two suspects fired several shots at each other and then fled the area on foot.

Police don’t believe the shooting was a random incident.

Investigators have obtained two surveillance videos showing one of the suspects.

“These videos depict a shooting occurring in our community in broad daylight, with citizens nearby, and may be shocking to some people,” says Const. Pierre Bourdages in a statement released Friday.

The suspect in the video is described as a black man in his mid-to-late twenties. He is five-foot-nine with a thin build.

He wore a light, grey hooded sweater, a black puffy vest, jeans, and covered his face with a black scarf at the time of the shooting.

Anyone with information about the shooting or the suspects is asked to contact Halifax Regional police at 490-5020.