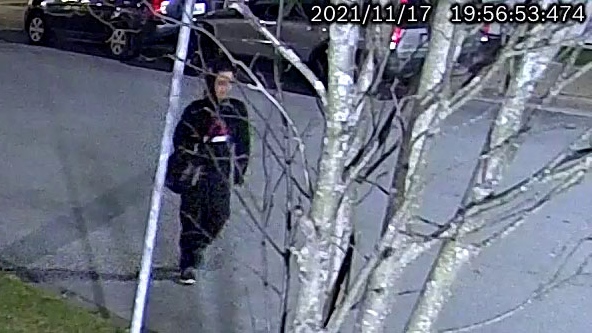 Halifax Regional Police has released images of a suspect connected to the theft and arson of a vehicle in Dartmouth, N.S. in hopes the public will be able to assist in their investigation.

Halifax Regional Police has released images of a suspect connected to the theft and arson of a vehicle in Dartmouth, N.S. in hopes the public will be able to assist in their investigation.

On Nov. 17, police received a report that a vehicle had been stolen from a residence on Demetreous Lane.

The next morning, police received a report that a burned-out vehicle was located in a parking lot on Lyle Street in Dartmouth. Police say officers confirmed it was the vehicle that had been stolen from Demetreous Lane.

Police have released images of a suspect who is described as a white man, with dark hair and a thin build. At the time of the incident, the suspect was wearing a black hooded sweatshirt with a red and white logo on the front, black pants, black sneakers and was carrying a black duffle bag.

Police: Texas gunman was inside the school for over an hour

Ray Liotta, the actor known for his roles in 'Field of Dreams' and the Martin Scorcese mob classic 'Goodfellas,' has died.

Ukrainian Prime Minister Denys Shmyhal says the West must not give in to Russian pressure to ease sanctions in order to restart the flow of agricultural exports.

Amber Heard told jurors Thursday that a harassment campaign waged against her by ex-husband Johnny Depp has left her humiliated and scared for her life from multiple death threats, and said she just wants 'Johnny to leave me alone.'