Halifax's noon boom: A 'startling' jolt of tradition since the 1800s 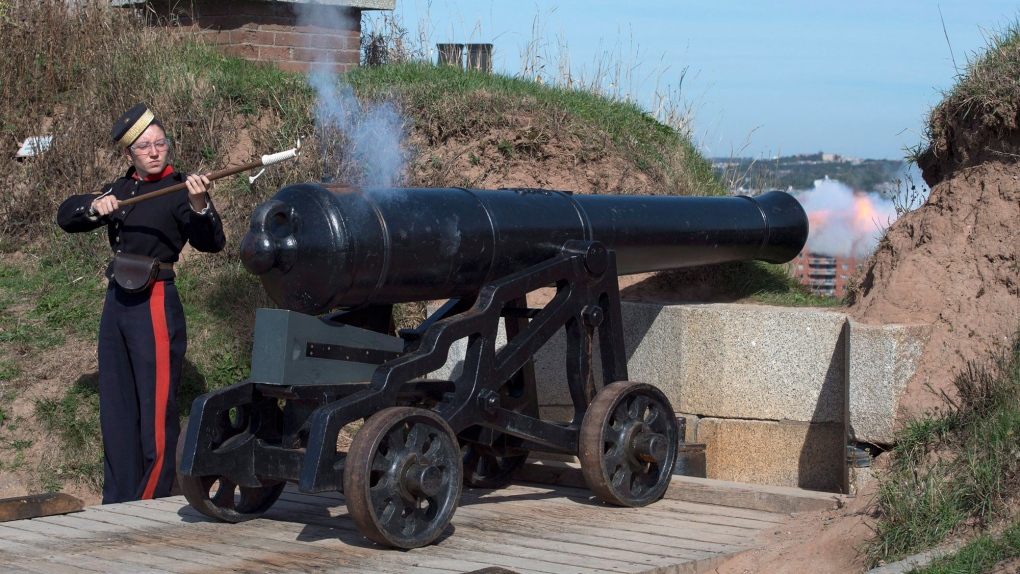 HALIFAX -- Almost every day, exactly at noon, Alec Stratford is jolted by a thunderous boom that reverberates through his office, the intense blast so loud it rattles the plate-glass windows.

Stratford, who has worked in Halifax for six months, is still getting used to one of the city's oldest, most raucous traditions: the firing of the noon gun at the Halifax Citadel National Historic Site.

His office is only a few hundred metres from the 19th-century British-built fort that overlooks the port city.

"It's startling every time," says Stratford, executive director of the Nova Scotia Association of Social Workers. "The gun pretty much faces our office and our boardroom. Whenever we are having meetings, often I'll remember to remind folks of it. But I frequently forget -- and every time it goes off, your heart stops for a minute."

For those working downtown, the ear-splitting crack of cannon fire is something that takes a bit of getting used to.

"I just hired a staff member and she is still caught off guard by it," says Stratford, who recalled how a few months ago a summer student was left mildly traumatized. "I would hear a little scream from their office every day."

Parks Canada spokesman Hal Thompson, a longtime employee at the fort, says he barely notices the daily explosions, but he has one colleague who isn't so lucky. "He's still not used to it and he's been here for like 10 years."

But it's unsuspecting visitors who tend to get the biggest fright.

According to local lore, U.S. President Bill Clinton's security detail crouched for cover and shielded the commander-in-chief when the cannon went off at the start of the G7 leaders summit in June 1995.

"The American contingent heard the gun ... and just dropped to the ground," says Thompson, a visitor experience officer. "Someone didn't brief them."

The cannon's roar has been part of Halifax's daily rituals for more than 200 years. It's a gut-punch reminder that the city, founded in 1749 by Col. Edward Cornwallis, has always been a die-hard military town, its massive harbour a strategic gem for the Royal Navy.

The tradition may seem an anachronism in a modern city, but there was a time when every community with a British fort would have had a noon gun. The tradition is also carried on at the Lion Battery in Cape Town, Causeway Bay in Hong Kong and at Signal Hill in St. John's, N.L. Vancouver has its Nine O'Clock Gun, which is fired from Stanley Park at 9 p.m.

The big Halifax cannon -- a 1970s reproduction of a Blomefield gun made in 1809 -- fires a one-pound charge of black powder, its detonation synchronized with the atomic clocks at the National Research Council in Ottawa.

When the weather turns ugly and clouds are low, the sound of the blast is amplified, setting off more than the usual number of car alarms.

The gun used in 1869, known as a 12-pounder, used to fire four-pound charges. But the amount has been reduced over the years amid a few complaints.

Today, the military custom is typically performed by a crew of two to five young people dressed in the blue uniforms of the 3rd Brigade, The Royal Regiment of Artillery.

The smooth-bore cannon is fired every day except Christmas Day. And when there's a malfunction, usually during wet weather, people call the fort to ask what happened.

"It is part of the fabric of the city," says Thompson, who for years took part in the ceremonial firing. "We have to keep doing it ... It's expected."

The existing stone fort -- completed in 1856 and never attacked -- is the fourth to be built on the hilltop site, the first three being wooden structures. The British army didn't leave until 1906, and the Canadian army stayed until 1951.

Restored in the 1970s, the star-shaped fort now looks like it did in 1869, only two years after Confederation.

At the time, the noon gun was among many signals used to alert soldiers to their daily routines. There was also an evening gun, not to mention a series of signals from bugle calls and bagpipes.

The sight of the gun's jet of white smoke was used by mariners to set their chronometers, an essential tool for calculating longtitude.

And in the early 1800s, the fort's battery commander would set his watch by visiting a jeweller who calculated the exact time by tracking the stars from the roof of his shop.