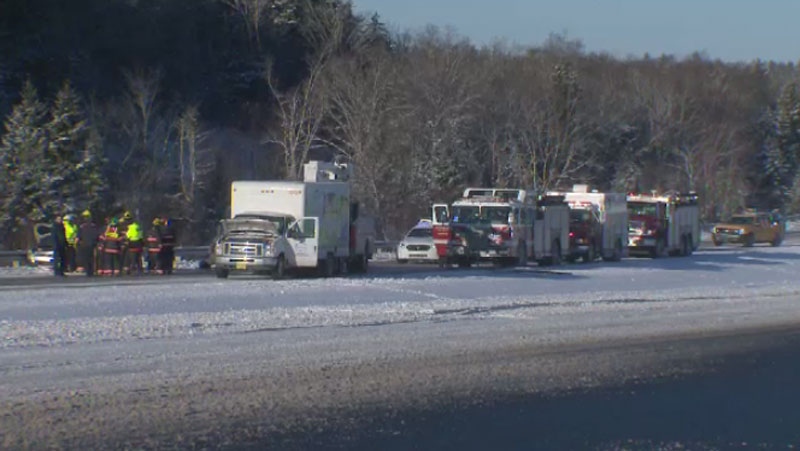 A man is dead and four people are injured after a five-vehicle collision on Highway 101.

The RCMP say one man is dead and four people are injured after a five-vehicle collision on Highway 101 near Ellershouse, N.S.

Police and emergency crews responded to the scene around 8 a.m. Thursday. They say the victim’s vehicle was pinned between a cube van and a Nova Scotia Power truck that was towing a Volkswagon.

The Volkswagon then went on to collide with a Hyundai Accent.

A 50-year-old male driver and a 24-year-old female passenger, both of Kings County, were in the cube van.

A 56-year-old Dartmouth man was behind the wheel of the Nova Scotia Power truck, while a 43-year-old man was driving the Hyundai Accent.

Police say they were treated for minor injuries and released.

The victim has been identified as a 23-year-old Hants County man. His name has not been released.

Nova Scotia Power says the line truck was being driven from the Annapolis Valley to its Lakeside depot by an employee of a professional driving firm at the time of the collision. The utility contracts the firm to move its vehicles between locations.

Police say the eastbound lanes between exits 3 and 4 remain closed while they investigate. Traffic is being rerouted to Highway 14.

Motorists are being asked to avoid the area and to take alternate routes.

An RCMP traffic analyst has been called in to investigate the cause of the collision.

Police are asking anyone who witnessed the incident to contact the Windsor detachment at 902-798-2207.

*Correction: The RCMP first said it was a woman who had been killed in the crash. They have since issued a correction on Twitter, saying it was a man.