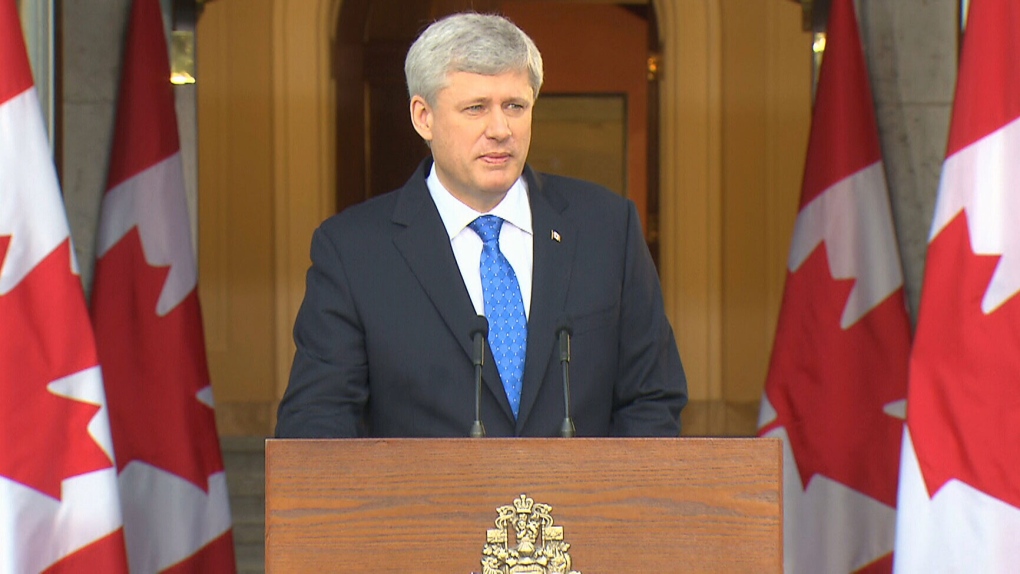 Harper made the announcement today outside Rideau Hall, square in the middle of the August holiday weekend, ending months of speculation and conjecture about when the campaign would begin.

He was quickly peppered with media questions about why he was subjecting Canadians to a campaign that promises to be the longest in more than a century and the costliest in the country's political history.

Simple, Harper replied: Conservative rivals are already campaigning, and they're doing it on the public dime.

"If we're going to begin our campaigns and run our campaigns, that those campaigns need to be conducted under the rules of the law, that the money come from the parties themselves, not from the government resources, parliamentary resources or taxpayer resources," he said.

"What we do by calling this campaign is making sure we are all operating within the rules and not using taxpayers' money directly."

NDP Leader Tom Mulcair was scheduled to launch his party's campaign moments after Harper's event; Liberal Leader Justin Trudeau is scheduled to make a statement later in Vancouver, where he is attending that city's Pride parade.

The very rarity of that feat goes a long way towards explaining his real reasons for choosing to formally call Canada's 42nd election in the middle of a holiday weekend in the dead of summer, triggering a gruelling, 11-week marathon rather than the five-week sprint that's typified federal campaigns in recent times.

The unusually long campaign activates an obscure provision in the Harper government's overhaul of election laws last year, allowing parties and their candidates to spend more than double the spending limits of $25 million and $100,000, respectively, that would have applied for a minimum 37-day campaign.

Having amassed vastly more money than any other party, the increased spending limits give the Conservative party and its candidates a huge advantage over their more impoverished rivals.

It's been clear for weeks how the ruling party intends to use its financial advantage: to carpet bomb the air waves with attack ads.

Conservative ads trashing Liberal Leader Justin Trudeau as "just not ready" to be prime minister have been ever-present on radio and television for more than two months already. Liberal insiders admit they've been effective, contributing to the Liberals' slow decline in the polls to third place from their front-running status over the previous two years.

Late Friday, the Conservatives suddenly turned their sights on NDP Leader Tom Mulcair with similar attack ads depicting him as an unethical, opportunistic "career politician." Having helped drive Liberal support to the NDP, they've now evidently decided they need to blunt Mulcair's momentum at the outset of the campaign.

The shifting targets of the Tory ads reflect the tricky two-front war facing the governing party.

At a time when the economy has tanked and polls suggest two-thirds of the electorate are looking for a change, the Conservatives risk driving change seekers to coalesce behind the NDP if they attack the Liberals too hard, and vice versa. They'll attempt to strike a balance, attacking both and warning that the economy is too fragile to risk putting it in the spendthrift hands of either Mulcair or Trudeau.

But Mulcair and Trudeau also face two-front wars -- with each other as much as with Harper. Each will be attempting to prove that his party is the vehicle that can defeat the Conservatives and provide real change. And in doing so, they'll be fighting not just to win the election but, potentially, for the very survival of their respective parties.

In either scenario, the opposition party that emerges strongest on Oct. 19 will have the upper hand; the weaker party could face possible extinction.