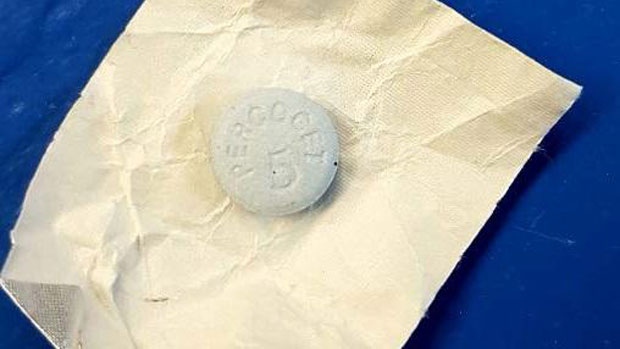 Police say the seized pill is blue, about one centimetre in diameter and inscribed with "Percocet 5." (New Brunswick RCMP)

RCMP say five Esgenoopetitj residents have been hospitalized since April 10 from suspected overdoses of the drug, a powerful synthetic opioid that has killed hundreds in western Canada but is relatively new to the East Coast.

Police are continuing to investigate the April 11 death of a 35-year-old woman on the First Nation, saying an autopsy determined she died of an overdose, although they are still awaiting toxicology results.

Her death has fuelled a growing movement on New Brunswick's First Nations to banish drug dealers.

Police say the seized pill is blue, about one centimetre in diameter and inscribed with "Percocet 5."

They say there was one other suspected overdose, but that person did not go to hospital. In the case of one man, RCMP administered naloxone spray, which appeared to reverse the drug's effects.