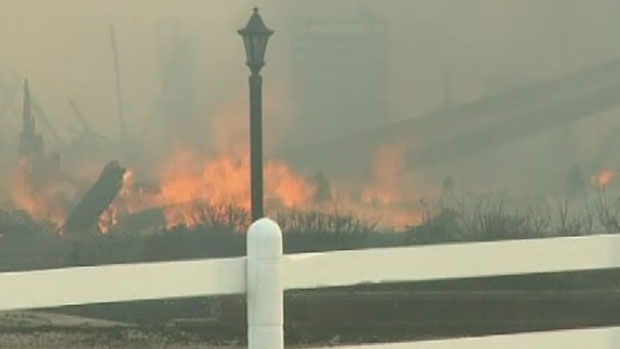 Only ashes and rubble remain of one the region’s oldest summer resorts after it was destroyed by fire yesterday.

Dozens of firefighters from several departments battled the blaze at the historic Stanhope Beach Resort on Prince Edward Island, but most of the structure was lost before they arrived.

Fire broke out at the resort before 4 p.m. Tuesday and the flames spread quickly, fully engulfing the building and causing the roof to collapse.

“The wind was extremely strong and it was very difficult in a wooden structure when the wind is that involved,” said North Shore Fire Chief Bob Morrison.

“We also had firefighters douse a propane tank on the far side of the property, keeping it cool, keeping it from venting,” said provincial fire marshall Dave Rossiter.

The building was one of the island’s first summer resorts dating back from the late 1800s. The property was first settled in 1789 and began accepting guests in 1855.

A total of four buildings were lost in the fire, including the main lodge, kitchen and dining room, 200-seat conference centre and guest rooms.

“Oh, it’s unbelievable. I just can’t believe it’s gone,” says area resident Josephine O’Brian. “We did our training here when I was in Holland College.”

About 10 employees were working at the time and some had to scramble to safety when the fire first started.

The general manager says it’s a relief no one was injured, but the losses are substantial.

“It’s a sad day. It was a beautiful building property, a lot of antiques inside that can’t be replaced,” says Ryan Cochrane.

Many Maritimers hope the owners will rebuild, but no decisions have been made.

“It’s not really our priority right now,” says Paul Murphy, vice-president of finance. “Right now we will focus on the affected guests and staff members.”

The resort has long been landmark in the community and today there was a constant stream of people stopping by to see what was left of it.

“Oh, it’s quite a tragedy, you know. It’s going to make it bad for a lot of people that had weddings planned for this year,” says Charlottetown resident Connie Doiron.

“The island has lost a jewel almost,” says local cottage owner Peggy Ogden. “You know, this place has been around for years and year and years. It’s brought such joy to the community.”

The manager of the nearby Stanhope Golf and Country Club says the resort was a real draw for the area.

“It was a perfect package. The beach was close by for the family to go there in the afternoon,” says Merlin Affleck. “It’s definitely a loss to the community for this summer. Hopefully they will rebuild.”

The provincial fire marshall says the investigation into the cause of the fire is still ongoing.