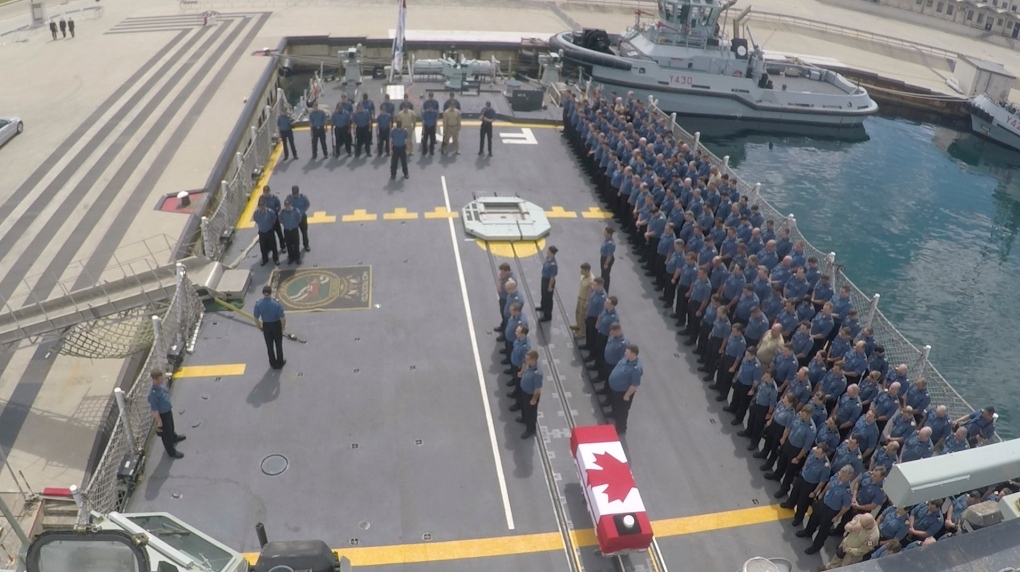 HALIFAX -- After being docked in Italy last week to repatriate the remains of casualties of the CH-148 Cyclone helicopter crash off the coast of Greece, the Department of National Defense says HMCS Fredericton will remain alongside until next week. It will then continue its NATO mission in the Mediterrean Sea for the remainder of its deployment, approximately three months.

The helicopter crash on the evening of April 29th killed the six military members on board. The remains of Sub-Lt. Abbigail Cowbrough were recovered, identified, and repatriated in a formal ramp ceremony at Canadian Forces Base Trenton Wednesday. The five other victims were also honoured, represented with the symbolic placing of military headgear into awaiting hearses. The military says other remains have been recovered, but not yet identified.

A flight safety investigation team is still overseas, working to determine the cause of the crash. That team includes a medical advisor, a technical advisor, and a representative of Sikorsky, the manufacturer of the Cyclone helicopters.

A spokesperson with National Defense says a summary of known facts, called “From the Investigator”, will be published at some point during the investigation on the Directorate of Flight Safety (DFS) website.

Once the full investigation is complete and the final report is approved, it will also be published on the DFS website.

National Defense says there is no timeline for the investigation’s completion.

“The emphasis remains on completing a thorough, accurate, and professional investigation leading to an effective investigation final report,” writes a Defense spokesperson.

“It is important to note,” adds the department, “that keeping the families of the fallen informed is a key step prior to making information public.”