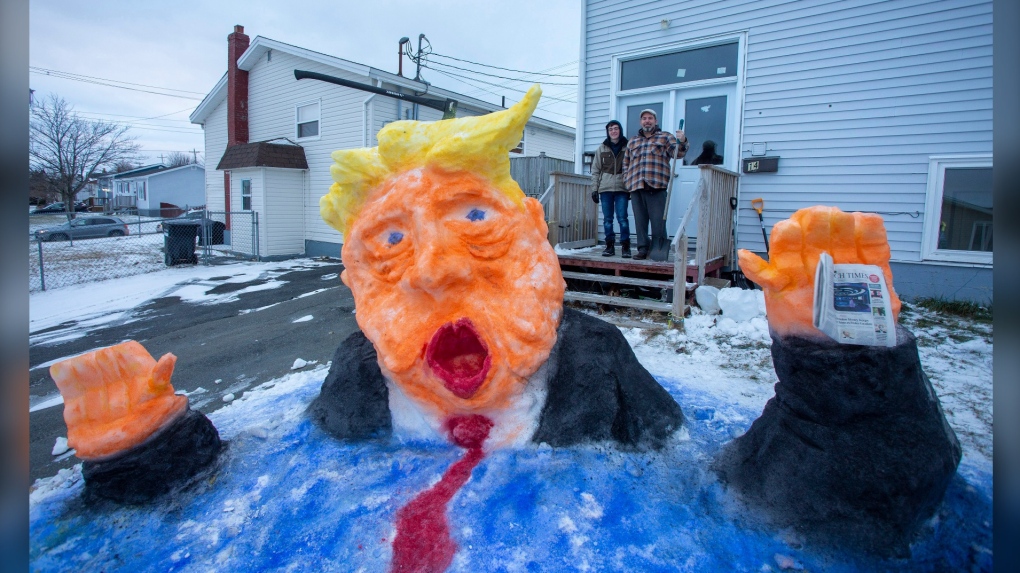 Sixteen-year-old Ashton Keating, left, and his father James Keating pose for a photo with a snow sculpture they created on their front lawn in St. John's, Wednesday, Jan. 20, 2021. The sculpture depicts former US President Donald Trump descending into the water. THE CANADIAN PRESS/Paul Daly

The sculpture depicts Trump with his arms up, mouth open and hair aflutter, while his signature red tie floats out before him on the blue-painted snow.

He and his 16-year-old son, Ashton Keating, had been working on it for a few days. Keating estimated they put about 10 hours of work into it and said they made sure it would be ready for Joe Biden's inauguration as U.S. president on Wednesday.

Biden is now the 46th president of the United States, after he beat former president Donald Trump in an election held Nov. 3.

Keating was coy about why he built the Trump monument, saying simply that he and his son build an elaborate snow statue every year. This was his first political work, he said, adding that it was "lots of fun to make."

Many who had stopped by to see the sculpture had chuckled, he said, adding that some had made gestures he wasn't comfortable describing in an interview.

Noting that he got much of the snow from the walkways belonging to the church next door, Keating said his good deed of shovelling balances out the obscene gestures he has invited to the area.

His message to former president Trump? "Bon voyage," he said.