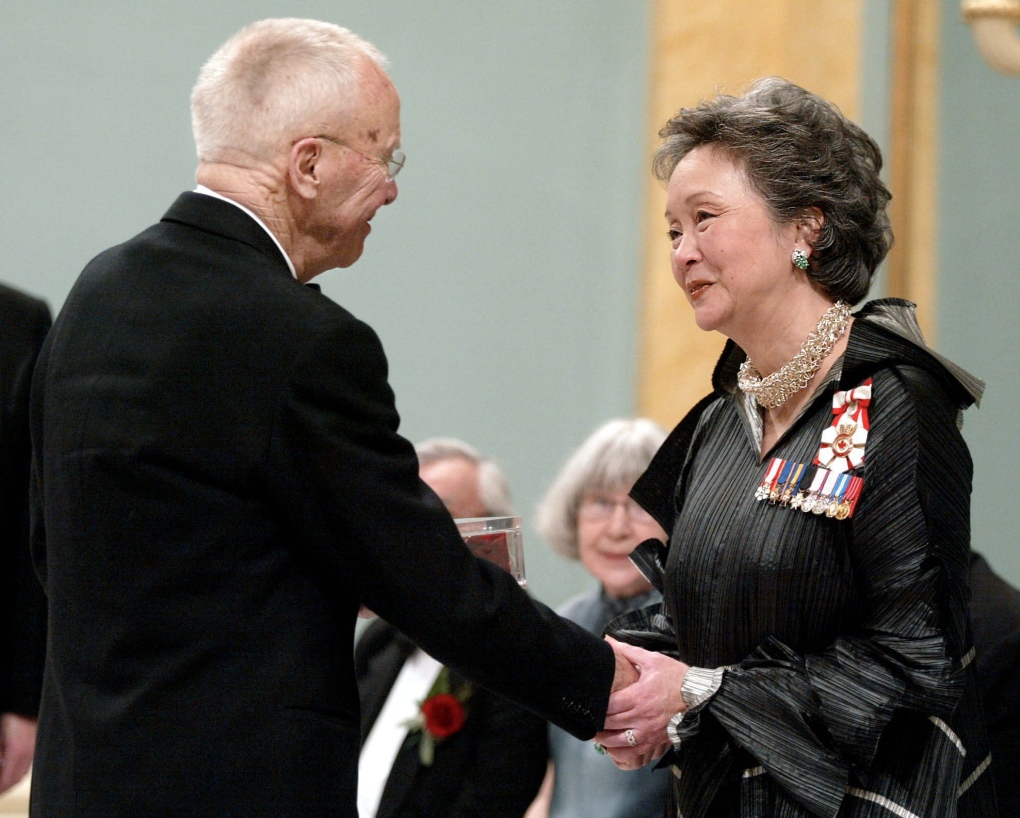 Governor General Adrienne Clarkson (R) presents Alex Colville with the Laureates of the Governor General's Awards in Visual and Media Arts during a ceremony at Rideau Hall in Ottawa, Monday, March 17, 2003. (Dave Chan / THE CANADIAN PRESS)

WOLFVILLE, N.S. -- Alex Colville, a man whose iconic art captured so intimately the lives of others, will be memorialized Wednesday when family and friends gather in a small Nova Scotia town to pay their respects.

The non-denominational funeral service will be held at Manning Memorial Chapel at Acadia University in Wolfville, where Colville once served as chancellor.

Longtime friend James Perkin, who is expected to speak at the service along with Colville's son Graham, said he hopes to shed light on the man behind the easel.

"One of the surprising things about Alex ... although he moved at the highest international levels as regards to his art, he was a very ordinary person," Perkin said in an interview Tuesday.

"He did not give himself airs. ... He always remained courteous, to the end."

The chapel can accommodate about 100 people, but university spokesman Scott Roberts said another 900 or so will be able to watch the service at nearby Convocation Hall. It will also be streamed live on Acadia's website.

Roberts said the service will be simple, with a couple of hymns and a song by a soloist. A reception will follow on campus.

Colville died July 16 at his home in Wolfville from a heart condition after years of coping with a variety of health issues. He was 92.

A renowned painter, engraver, sketch artist and muralist, Colville was known for capturing the simple, tranquil moments of everyday life on canvas.

Colville was born in Toronto on Aug. 24, 1920 and moved to Amherst, N.S., as a boy with his family. He studied fine arts at Mount Allison University in nearby Sackville, N.B., where some of his most important works, including "Nude and Dummy" and "Horse and Train," would later be created.

It was also there that Colville met his wife and muse, Rhoda. The couple married in 1942 in Wolfville -- a quaint university town in the Annapolis Valley that would eventually become their home.

The university awarded Colville an honorary degree in 1975 and named him chancellor six years later. Colville held the post until 1991 and later served as an honorary member of Acadia's board of governors.

Perkin, a former Acadia president, said Colville was a gracious and approachable mentor who would often stop on campus to chat with students whether it be about philosophy or politics.

At work, however, he focused on quiet, fleeting moments. The result was simple haunting snapshots of people, animals and landscapes frozen in time.

Perkin said no moment -- no matter how mundane or fleeting -- was insignificant to Colville.

"He once said to me, 'You can make a million dollars and you can lose it all and if you're lucky you can get it back. But if you lose 10 minutes, they're lost forever.'

"And that was very much the glimpse into the personality of the man."

Colville is survived by daughter Ann and his two sons, Graham and Charles. Rhoda Colville died last December at the couple's home.

Perkin said he witnessed something change in Colville when he lost his longtime love.

"I think something went out of Alex's life at that point," said Perkin, who wrote a biography on Colville entitled "Ordinary Magic."

Perkin said the couple would be interred together at Starr's Point Cemetery in nearby Port Williams following the service.