Hurricane watches issued ahead of weekend arrival of Fiona

Hurricane watches issued ahead of weekend arrival of Fiona

A series of hurricane and tropical storm watches were issued for Atlantic Canada by Environment Canada and the Canadian Hurricane Centre Thursday afternoon. A watch means that hurricane or tropical storm conditions are possible in the alerted area within 36 hours.

Hurricane Fiona continues to pick up speed towards the north as a Category 4 hurricane, now moving at nearly 25 kilometres per hour. The storm is forecast to pass to the west of Bermuda and enter the Scotian Slope marine waters of Atlantic Canada as a Category 3 hurricane on Friday.

Landfall as a powerful post-tropical storm, equivalent to a Category 1 or 2 hurricane looks increasingly likely in eastern Nova Scotia Saturday morning. The forecast cone for that landfall has now narrowed to span eastern Halifax County across Cape Breton. Various computer models show a landfall somewhere in the area from Canso to near Louisbourg in Nova Scotia between 6 a.m. and 10 a.m. Saturday. Weather conditions in the Maritimes will deteriorate Friday night into Saturday morning. 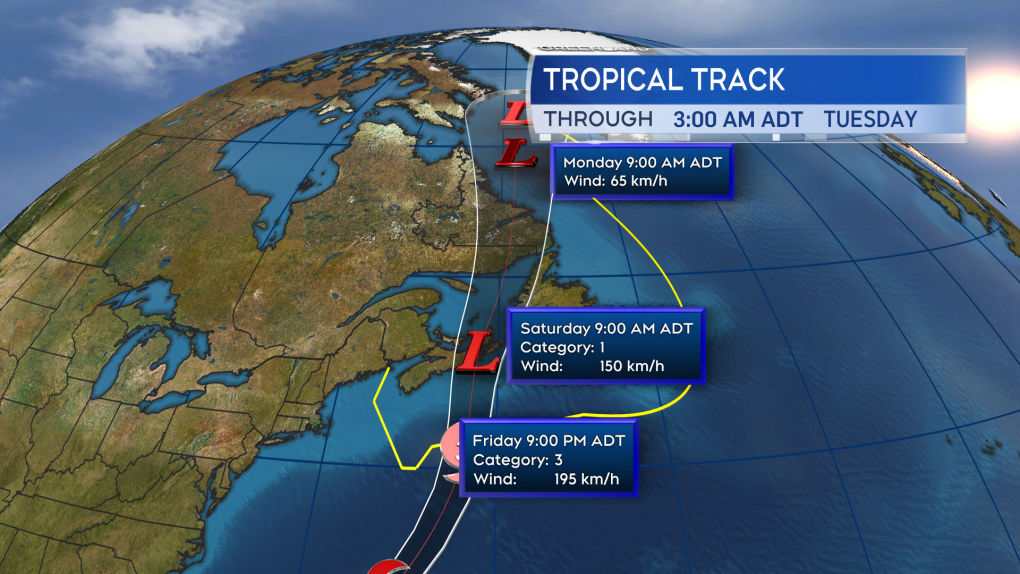 A hurricane watch has been posted for Prince Edward Island and Halifax -- east across Nova Scotia. Tropical storm watches extend into the southwest of Nova Scotia and eastern New Brunswick.

A moderate probability of a tropical storm force wind extends into the south shore of Nova Scotia and southeastern New Brunswick. Gust strength will exceed those one-minute sustained winds. 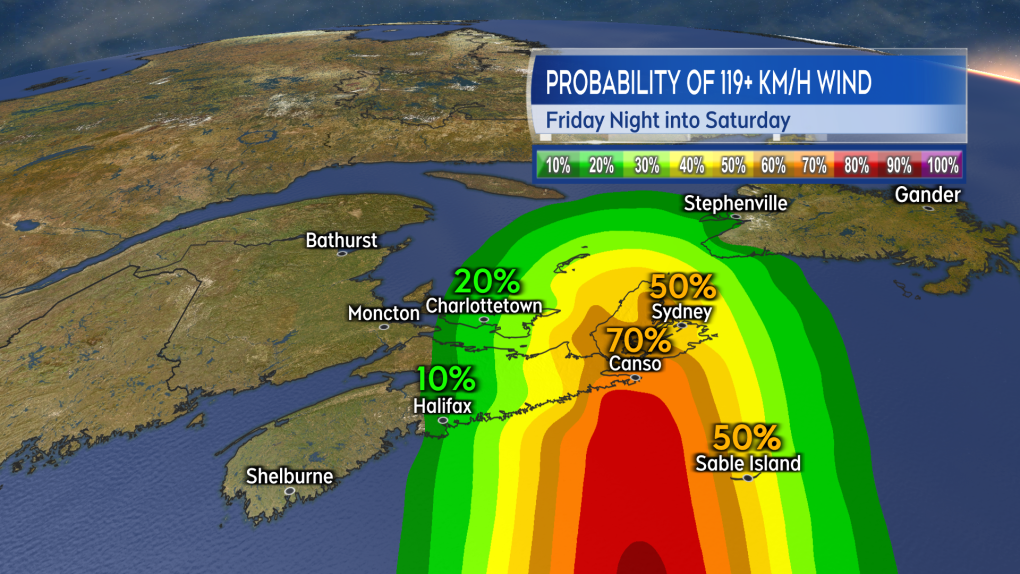 The highest probability of a hurricane force wind will be near and to the east of the landfall point. Currently looking most likely to be in eastern Nova Scotia. 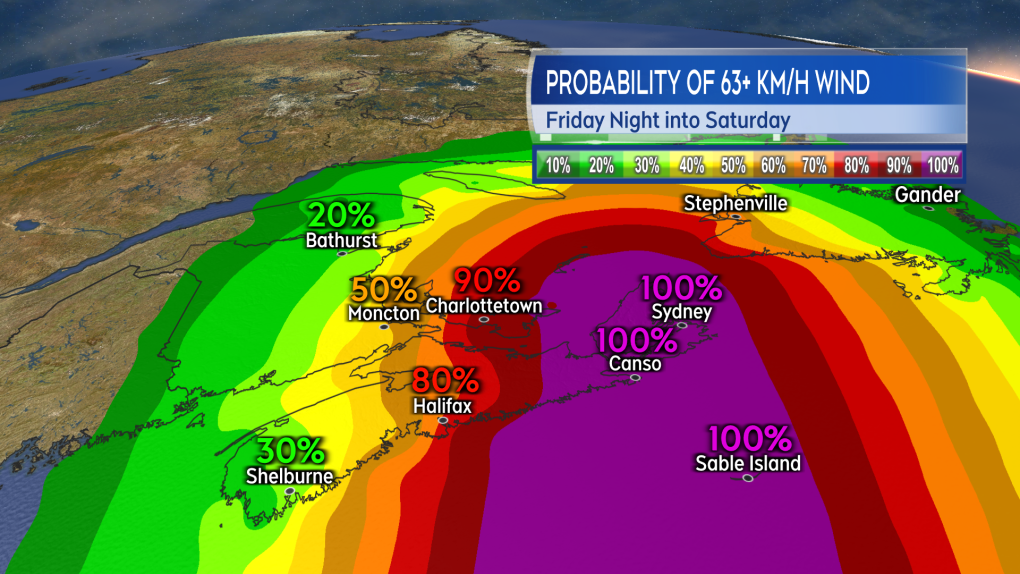 The risk of tropical storm force winds extends across much of Nova Scotia, Prince Edward Island, and into southeastern New Brunswick. That is a one minute sustained wind near 63 km/h with gusts possibly reach 100 km/h or higher.

Wind will increase in strength for much of the Maritimes Friday night into Saturday morning.

Peak gusts in eastern Nova Scotia and P.E.I. could reach 120 to 150 kilometres per hour due to being in proximity to the centre of the storm as it passes. That said, widespread gusts reaching 90 to 120 kilomtres per hours look possible, extending as far west as Halifax in Nova Scotia.

Gusts reaching 70 to 90 kilometres per hour could possibly extend into the southwest of Nova Scotia and eastern New Brunswick. Wind direction will primarily be out of the north and northwest. The exception is the area east of the landfall point, most likely Cape Breton, where the direction will be easterly turning southerly.

Wind of that strength will have the potential to cause power outages. In the eastern part of the region, where the wind is forecast to be strongest, there is an increased risk of tree and branch falls. Where the wind is onshore, it will help to produce a ferocious surf and risk of storm surge. 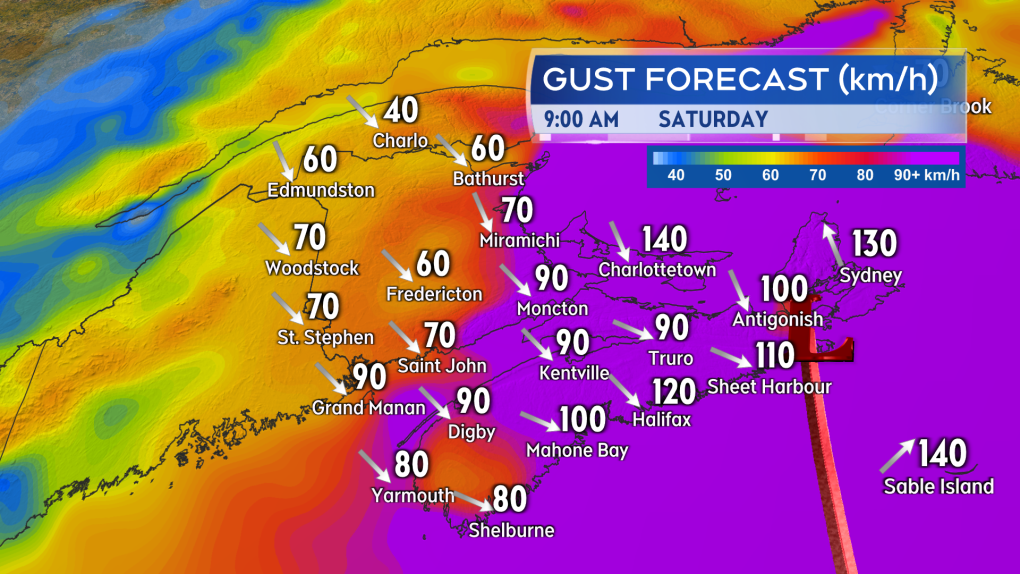 Intense winds will increase wave action against the coast further increasing the risk of flooding or damage. Near coastal waves reaching 10 metres, or 30 feet, may be present on the eastern shore of Nova Scotia late Friday night into Saturday morning.

A significant build of wave height in the Gulf of St. Lawrence is also expected, increasing the risk of erosion on north facing beaches of P.E.I. There is a period of high tide for the eastern part of the Maritimes Saturday morning -- particular caution should be taken during that tide. Waves and risk of storm surge should diminish moving through Saturday afternoon into Saturday evening. 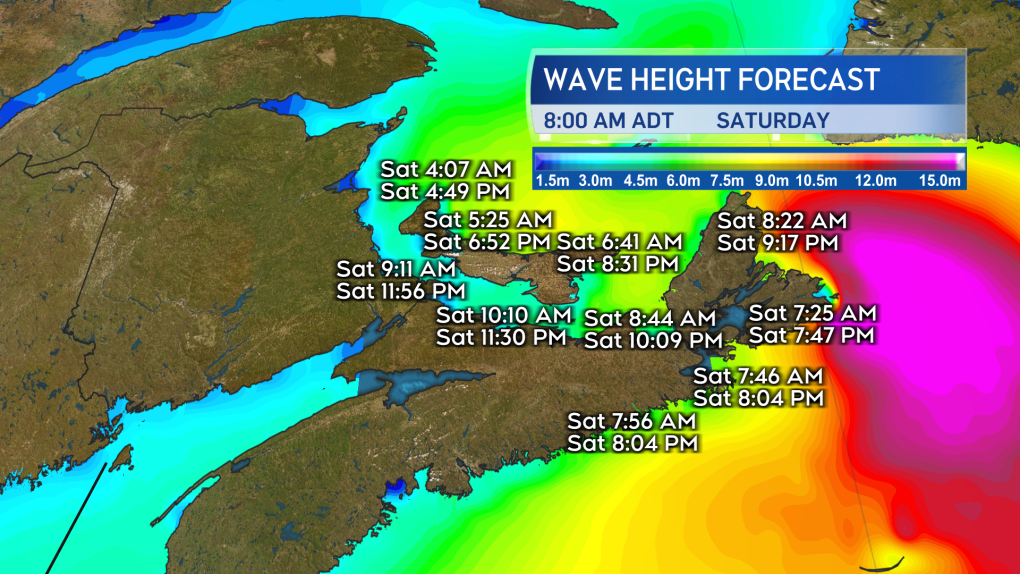 The risk of a damaging storm surge is highest in the east of the Maritimes. Extra caution should be taken if by the coast in that area particularly during the high tide Saturday morning.

Torrential rain is expected for eastern parts of the Maritimes Friday night into Saturday morning. Friday through Saturday could see rain totals of 80 to 200 millimetres in eastern P.E.I. and eastern Nova Scotia increasing the risk of flash flooding and washouts. Rainfall totals could reach 50 to 80 millimetres extending towards the west of P.E.I. and central areas of Nova Scotia. There is potential for heavy rainfalls to quickly move into New Brunswick and the southwest of Nova Scotia. 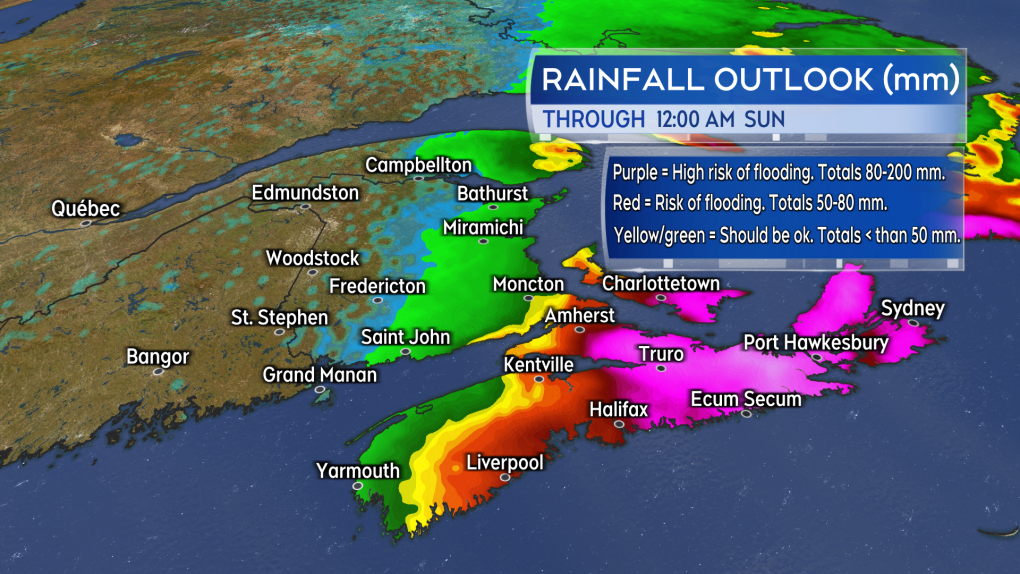 The risk of flooding is expected to be highest in eastern Prince Edward Island and eastern Nova Scotia. Rain in that part of the Maritimes could total 80 to 200 mm Friday through Saturday.

Maritimers who have them should make sure that sump pumps and generators are in working order and the drainage on their property is clear of debris.

Other storm preparations to take include:

Body of missing woman apparently swept out to sea in N.L. found as Fiona recovery begins

A day after post-tropical storm Fiona left a trail of destruction across Atlantic Canada and eastern Quebec, residents of a devastated coastal town in western Newfoundland learned of the death of one of their own.

Meteorologist's shocked reaction to Fiona: 'Like nothing I've ever seen'

NTV News' Chief Meteorologist Eddie Sheerr appeared shocked while offering a dour account of the impact post-tropical storm Fiona had on the southern part of Newfoundland and Labrador.

The herd of wild horses inhabiting Sable Island, which was directly in the path of post-tropical storm Fiona, appear to have come through the extreme weather safely.

Around 100 Canadian troops deployed to each of N.S., P.E.I., N.L. for post-Fiona recovery: feds

In an update Sunday regarding the devastation of post-tropical storm Fiona in Atlantic Canada, federal officials confirmed that the Canadian Armed Forces are already on the ground in several provinces to assist and are on their way to others.

Over 280,000 Maritimers still without power in Fiona's wake

Strong winds and heavy rainfall from Fiona have left over 280,000 Maritimers still without power, as of 11 p.m. local time Sunday.

Russia's rush to mobilize hundreds of thousands of recruits to staunch stinging losses in Ukraine is a tacit acknowledgement that its 'army is not able to fight,' Ukraine's president said Sunday, as splits sharpened in Europe over whether to welcome or turn away Russians fleeing the call-up.

Prince Edward Island is reporting at least one death following an historic storm that forced thousands into the dark and caused extensive damage across the island.

How age is a big factor for immigration applicants to Canada